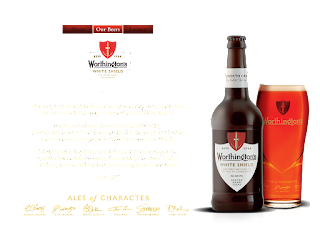 It’s a long time since I last tried Worthington White Shield, but I picked up a couple of bottles in Waitrose before Christmas, and have only now got round to cracking one open.

The company have obviously improved the yeast strain, as although the beer is still bottle-conditioned, it poured bright virtually right down to the last drop. I remember drinking White Shield back in my late teens, when pouring the beer was a real art; especially if you wanted a clear beer in your glass. Back then there was always a much thicker, and often more looser, layer of yeast sitting at the bottom of the bottle, and if the beer was particularly lively, your chances of ending up with a bright beer were virtually nil.

The improvements which enable today’s White Shield to be poured bright are down to the use of different yeast strains for primary and secondary fermentation. A yeast which drops to the bottom of the bottle and then stays there, forming a thin tight layer, has obviously been selected, and it reminds me of another famous bottle-conditioned beer which uses a similar highly flocculant and sticky yeast; namely Fuller’s 1845.

Back in the late 1970’s White Shield was brewed by Bass-Worthington, at their historic brewery in Burton-on-Trent. The beer was a real life-saver, as it was often the only beer worth drinking in a pub where all the other beers were keg. It was available in half-pint (275ml) bottles only; unlike today where it is presented in a very stylish looking 500ml bottle, with an attractive label depicting the Worthington trademark of a sword set against the background of a red shield.

As far as I know the recipe and the strength have remained unchanged, but to me today’s White Shield is a far less complex beer than the one I remember drinking back in the 70’s and 80’s. The White Shield from 40 years ago had a distinctive “nutty” taste which, although still present in today’s version is far less pronounced. The modern version is still a very good beer, but it is not quite the same.
It may be that White Shield lost some of its character when the Burton Union system of fermentation was abandoned back in 1982. As production volumes fell the beer went through a period of being shunted around various different sites in the Bass Empire, including the old Hope & Anchor plant in Sheffield and the former Mitchell & Butlers Cape Hill Brewery in Birmingham.  Its darkest moment came in 1998, when production was just a mere 1,000 barrels a year.

Bass announced plans to discontinue the beer, but there was such an outcry from beer lovers that they agreed to it being contract brewed at Sussex Brewers, King & Barnes. Unfortunately the latter’s Horsham Brewery closed in 2000 when the company was bought out by Hall & Woodhouse. White Shield was now a beer without a home. Fortunately Bass decided to bring the beer back in-house and White Shield returned to its Burton roots.

This homecoming saw the beer being brewed on a “pilot-scale” brewery, at the Bass Brewery Museum (now the National Brewery Centre), but as volumes increased production was moved to a dedicated plant, known as the William Worthington Brewery. In 2012, production volumes had increased sufficiently to justify a move to the main Coors Brewery in Burton-on-Trent.

White Shield was first brewed in 1829, by the Worthington Brewery in Burton-on- Trent. Its principal market was the large British presence in India, where the demand for thirst-quenching pale ales was particularly high. William Worthington was one of the leading Burton brewers but, in contrast to most of his competitors, he concentrated on bottled beer production. It shouldn’t be forgotten though that the company also brewed an interesting range of draught pale ales which were labelled simply A,B,C etc. It was Worthington 'E' in keg form that went on to become a major Bass brand in the 1970s.

In 1927, Worthington merged with their Burton neighbours Bass, but White Shield retained its separate identity and continued as a ‘live’ bottled product. This was at a time when most brewers were moving to filtered and pasteurised bottled beers. At its peak in 1952–53, 92,000 barrels of White Shield were brewed. After merging with Charrington United in 1967, Bass went on to become the UK’s largest brewers; but following the fall-out from the government’s Beer Orders, and the decision of the Monopolies Commission to block their proposed merger with Allied Breweries, Bass sold their brewing interests to Molson Coors in 2002. The American company are now the owners, and brewers, of the iconic White Shield brand.

As mentioned above, production volumes have now thankfully increased to a level which enables the beer to be brewed at a mainstream brewery again, but strangely I have only ever seen White Shield on sale at Waitrose, and not in any of the other major supermarkets.

Be that as it may, I at least know where to get hold of the beer. I have decided to lay the other bottle down until Christmas; just to see how it turns out, but I’m sure I will be buying a few more before then. You see, I’ve a vested interest in the beer and its fortunes, because as a former Bass employee, I’ve got a pension maturing with Molson Coors, so it would be nice to do my little bit towards increasing its value!
Posted by Paul Bailey at 19:54

White Shield was often a good choice in keg pubs, or a treat in a real ale pub. My friend Alan was saying recently how I'd carefully pour a sparkling White Shield and then knock back what was left in the bottle. He could never get his head around that.

In the 1970s, there was a distinction between Bass Charrington and Bass Worthington pubs and beers: the latter branch of the business was seen as far superior.

On the basis of your post, I think I'll try a bottle of White Shield for the first time in years; I'm sure its flavour will be altruistically enhanced by the knowledge that I'm boosting your pension.

It's available in Booths, which I know is not much use to Southerners. In the past I've seen it in both Tesco and Morrisons, but not recently.

I think a problem now is that, while it's still a very good beer, it doesn't actually do all that much bottle-conditioning, which the old one in 275ml bottles certainly did.

Many years ago, when I was living in Surrey, my parents came down for the weekend to visit me and stayed in an upmarket hotel where they got a cheap deal. This did not stock cask beer, but what it did have was White Shield - in well out of date bottles. It was absolutely sublime, although with a tendency to foam a bit too much.

Bass Charrington were the London-based, southern arm of the company Nev, whilst Bass Worthington were based at Burton-on-Trent. The latter were definitely regarded as superior, probably because Burton was still turning out a reasonable amount of quite decent, traditional ale.

The southern arm had closed the historic Charrington’s Brewery, in London’s East End, and the beer was being brewed at the huge, former Mitchell & Butlers plant at Cape Hill, Birmingham. The Brummie-brewed Charrington IPA wasn’t a patch on what Charrington’s London brewery had been turning out, but by means of consolation, many Charrington’s pubs in the south-east also sold Draught Bass.

So far as White Shield is concerned, I think you are absolutely right Mudge, that the beer gets precious little bottle-conditioning these days. There was a minimal amount of sediment in the bottle I drank the other day, and I think this partly accounts for the noticeable loss of character in the beer.

I suppose the brewery are trying to play safe; especially as being asked to pour a White Shield used to strike terror into the heart of many a barman or barmaid. I feel that in doing so, they are missing out on the possibility for a good beer to once again become a truly great beer, and that something unique has been sacrificed for the sake of convenience and appearance.

Please see this posting which I think you would appreciate: http://www.beeretseq.com/transpontine-pale-ales/

I have drunk gallons of the stuff in the past. The bottle version today tastes nothing like it used to. I would almost say bland. Same with Fullers ESB. Tastes nothing like it did 40 years back. Saw Ind Coope Burton Ale on tap in Wetherspoons not long back. Gleefully bought a pint only to drink a dull, musty glass of you-know-what..........

I liked your blog nice one

My late Uncle Eric introduced me to White Shield in the 1970s. His favourite trick was to seek out a new member of staff at one of his local pubs and ask for a White Shield. He would take great pleasure in watching the hapless barmaid/man attempt to pour it only to end up with a glass of froth. His 'piece de resistance' was to request a new bottle that he could pour, which he did with due reverence to ensure a clean clear half pint. "That's how it's done" he would say before supping a long mouthful of a clear, sparkling ale. He would then upend the bottle into the glass to achieve what he called an "all in". The look on the barmaid's face as this perfectly clear beer turned into a cloudy one was priceless.

I came across your comments after drinking White Shield on draught for the first time today. As with the current bottled version, disappointing compared to the White Shield of old. This despite being a hefty 5.6%. I think it lost its character once it left the old Bass Unions. As is the tendency now, brewed to drop bright as quickly as possible and look good, rather than for character and complexity. Same applies I think to Pedigree and Draught Bass, both now mediocre pints. I used to buy several bottles of White Shield from my Bass local, and drink it bright, then drop the rest in for a shot of cloudy yeast and findings to finish. Sublime! Mind you, next day...!