Craft Beer has obviously taken off in a big way in Barcelona. The city now boasts an impressive number of breweries, and a growing number of well-regarded brew-pubs. Whilst most of the latter are home-grown establishments, international chains, in the form of Brew Dog and Mikkeller have also opened bars in the Catalan capital, but I like to stick with more local stuff when visiting somewhere new.

Given all that was going on with the Barcelona Beer Festival, plus a spot of sightseeing, it’s hardly surprising that I only managed to visit one brew-pub during my short stay in the city. However, I was well impressed with what I found in the form of Black Lab Brew-House & Kitchen. The company have only been trading since 2014, but despite this they have established an excellent reputation for both their beer and their food. Their restaurant-cum- brew-pub took a bit of finding, but the ironic thing was I had walked past the front of the building where the pub is housed, earlier in the day.

I stopped by for lunch on the Sunday, but I had first started my day with a Mc Donald’s breakfast at the Maremagnum Shopping Centre which overlooks the inner harbour; known as Port Vell. I walked back along the other arm of the harbour, pausing to admire some of the extremely flash and expensive looking yachts moored there. After this I headed for the seafront, after first walking through a neighbourhood of densely packed, high-rise apartments.

It seemed as though much of Barcelona had decided to join me; and why not? It was a beautiful early March day. The sun was shining and there was not a cloud in the sky, but there was a brisk wind blowing which helped keep temperatures down. The locals were wrapped up against the chill, but to me, whilst obviously not shorts and T-shirts weather, it was just perfect. I strolled along the promenade, covering virtually the entire length of the seafront, and ended up on the periphery of the Olympic Village.

I had no firm plans, but the idea of some locally-brewed beer, plus a bit to eat seemed particularly appealing. I found a seat overlooking the beach and sat down to view the map. I also had a downloaded copy of a guide to Barcelona’s Top Ten Brew Pubs. Relatively close to where I was currently situated was the Black Lab Brew-House & Kitchen, so I set off to find it.

I say relatively close, but I needed to head back inland in order to make my way to the inner harbour where I had been earlier in the day. It was quite chilly in the shadow of the buildings which form part of the city’s hospital and university complex; especially as the strong wind was being funnelled along the gaps between them, but eventually I reached the main thoroughfare which led back towards the harbour. 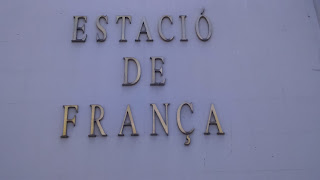 Before looking for the Black Lab, I decided to re-visit the Estacio de França railway station, which was just a short distance away. I was last there in the summer of 1975, when I made a fleeting stop in order to change trains. I was travelling around Europe by Interrail with a friend from university, and we had journeyed, virtually non-stop for several days, from the town of Split in former Yugoslavia. Our destination was the well-known resort of Benidorm, where my then girlfriend was living and working at the time.

Our connecting train was due to depart from Barcelona shortly before midnight, but it was already full and an over zealous conductor wouldn't let us board. We managed to sneak on at the last minute, and the following afternoon we were in Valencia. Franco was still in charge of Spain back then, so this might not have been the wisest thing to do, but when you’re young life’s a big adventure and you don’t really think about these things.

The Estacio de França seemed a lot quieter this time round, and had been spruced up since my last visit. It is no longer Barcelona’s main station, as it has been eclipsed by the larger Estació de Sants. Unlike França which is a terminus station, Sants offers through services, following the construction of a series of rail tunnels beneath the city. I was pleased I stopped off at França station, but my reasons weren’t completely nostalgic. Having reached a certain age, I find my bladder capacity is no longer what it was, so the need to find a suitable drain-off point becomes more pressing. I knew there would be public toilets at the station, and the lavabos there were clean, free and above all most welcome! 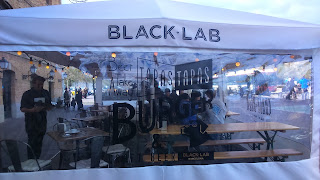 After walking around the busy Plaça Pau Vila, I found the Black Lab located in a section of the imposing Palau de Mar; a block of old warehouses which has now been converted into a series of shops, restaurants and bars. I made my way inside and was greeted by one of the friendly staff. I was shown to a small table, suitable for one person. The pub interior is bright and modern-looking, and at the rear, behind some glass screens, are a series of fermenting vessels. The actual brew-kit is housed in another part of the pub, and I was able to get a closer look when I used the facilities; just before leaving.
There were around 13 different beers on offer, and these were displayed on a prominent chalkboard. I started with the 1480 American Pale Ale, which at 5.5% was just about right. Well-hopped, as one would expect, the beer slid down well after my morning stroll along the seafront. I followed it with a glass of Terraplane Porter; a tasty and well-balanced dark beer, which weighed in at 5.2%. I also treated myself to a substantial and rather spicy Chicago Hot Dog.

There was a young-looking group sitting in front of the fermenters, and judging by their attire they were from the Beer Festival. After they left, a group of around half a dozen English women turned up. They were obviously NOT from the Festival, as none of them chose beer, to go with their food, with most going for either water or wine. Talk about letting the side down!

As I said earlier, the brew-kit was on the way to the Gents. It looked shiny and new, which is hardly surprising since the Black Lab has only been open just over a year. It is definitely a place to return to though, with friendly and knowledgeable staff, a nice setting, good food and great beer. I could have stayed longer, but I wanted to get along to the Beer Festival to see what was happening.

I’d had a most enjoyable morning, walking around the harbour and then along the seafront. I had indulged in a spot of nostalgia as well, before ending up at this excellent brew-pub, where the beer and the food rounded off the first half of what turned out to be a perfect day. 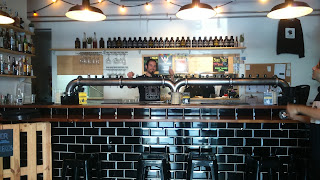