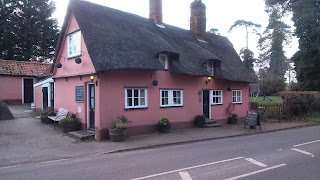 As mentioned in a previous post, last weekend I visited two pubs on CAMRA’s National Heritage Register. The first of these was the Cock at Brent Eleigh, in the south-western corner of Suffolk. I managed a brief stop there on my journey up to Norfolk, where I spent a couple of days visiting my father.

My usual route to this part of East Anglia  is via the M25 and M11 motorways, followed by a long slog up the A11. The latter road is now finally dual-carriageway all the way to Norwich, but it is still very monotonous. I therefore occasionally travel via the A12 and A14 trunk roads, before heading directly north along the A140 towards Norwich. The latter is not the best road either, with speed restrictions, and cameras, along much of the road, but on this occasion it provided the most direct route after I had visited the aforementioned Cock.

I won’t bore you further with the details of my entire journey, but I navigated my way to Brent Eleigh after making what the Americans would euphemistically describe as a “comfort stop” in the pleasant Suffolk town of Sudbury, just over the border from Essex.

The Cock is an attractive thatched and pink-rendered wayside inn which dates back to the 18th-century. The pub still retains its two room and off sales layout. The main bar  is on the left and is accessed from a corner door. There is a quarry tiled floor, a 1930s brick fireplace with a coal fire (complete with dog laying stretched out in front of it), and seating consists of two basic bare benches, an assortment of chairs and a few bar stools. Apart from a few changes which took place in 1976, the interior remains pretty much the same as it has been for decades. The main alteration was the replacement of a serving hatch by the present  bar counter and the installation of the bar back shelves.

The smaller "old bar" is on the right, and has its own front door; but it can also be accessed via a narrow door from the main bar. Like the main bar, there is a quarry tiled floored room, a low tongue and groove panelled ceiling and some old wooden panelling around the room. There is an old bench on the right near the servery and a small shelf to rest your drinks. A large scrubbed table forms the centre-piece of the room.

I arrived at the Cock shortly after 3pm; its distinctive pink exterior standing out against the surrounding country side which was looking rather drab at this time of year. After parking the car, I crossed the road to take few photos, before the light began to fade, and then made my way into the main bar of the pub. There were a handful of regulars, sat around a large table, plus the odd dog, but there were also a couple of seats next to the bar. An old-fashioned cabinet-type, bank of hand-pumps, was attached to the opposite wall, with three cask beers on offer. The choice was Adnam’s Southwold Bitter, Greene King Abbot, plus a guest ale, whose name escapes me. I ordered a pint of Adnam’s, which at just £3.10 a pint, represented good value.

It was in excellent condition as well, and as glasses were re-filled, I noticed that practically everyone was drinking it. I did see one pint of Abbot ordered, slightly more expensive at £3.40, but I like Adnam’s, and at 3.7% ABV, one pint was not going to put me over the limit. The bar started to fill up during the half hour or so I was there, and I counted a dozen people there, including myself. The banter seemed friendly and good-humoured, but as it was of a slightly personal nature, I decided against joining in.

I asked the landlord if I could have a look in the adjoining bar, which was reached through a small door, just behind where I was sitting. "Of course", was his reply and I was rewarded by the sight of an empty, but totally unspoilt traditional old bar and was able to take a few photos.

I only stayed for the one, but just before I left I enquired as to the whereabouts of the toilets. I had an inkling they were outside, and this was confirmed by the landlord who remarked that “Inside toilets are unhygienic!” Mission accomplished, I bid my farewells to this timeless old pub. I can strongly recommend a visit, and if you want to linger rather longer than I was able to, the Cock offers Bed and breakfast accommodation in a building at rear of pub. I also understand that the home-cooked food is very good.

The Cock is situated on the not terribly busy A1141, which runs down from Lavenham to Hadleigh. Alternatively, you can do what I did and follow your nose up from Sudbury; a route which takes you through some charming villages. The villages on the route I took northward, after leaving the pub, are if anything even more charming with Chelsworth and Bildeston absolute gems. Just don’t try arguing with a fully-laden grain lorry!
Posted by Paul Bailey at 20:25

Hi, Paul, coincidently my name is Paul Bailey and my wife and I have just spent a week in Brent Eleigh and visited the Cock every evening. I can confirm that the beers were of excellent quality on "on form" The locals made us feel very welcome and by the end of the week we were practically 'locals' ourselves.

We sampled the landlady's cooking by having a superb full English breakfast (she only does this on a Thursday morning) but we did see others partaking of food of an evening. The menu is limited to what she has available!

This pub is well worth a visit.