There were a series of behind the scenes activities going on in the background at last weekend’s Barcelona Beer Festival, which whilst separate from the main festival, were still an integral part of it. These “activities” were intended to both complement the event, as well as enhance it, and were divided into three separate categories. There were “professional” sessions, aimed primarily at PR People and journalists, “Meet the Brewer Sessions”, which understandably were very popular and had to be pre-booked, and there were also a number of lectures, held in the adjoining auditorium. These were open to the public, and were on a range of cultural and gastronomic topics related to the brewing industry. 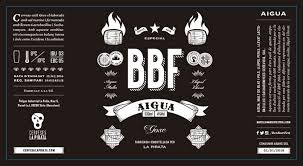 I received an invite from festival organiser Joan-Villar-i-Marti to attend the BBF Brewers Pack session on the Friday evening. This involved presentations from each of the four local brewers responsible for the four, limited-edition beers produced specially for the festival. Each beer was brewed to represent one of the four main ingredients used to produce beer; namely water, malt, hops and yeast, allowing people to appreciate the importance of each individual ingredient, and its place in the overall picture. As well as listening to the presentations, we had the opportunity to taste the individual beers, and to make thing really interesting, each brewer also brought another of their beers along for us to try.

The presentations were made in the local Catalan language, and whilst some of the brewers spoke English, we relied on Joan to translate quite a bit of what was said. Therefore, if what I write makes even less sense than normal, let’s just say “things got lost in translation”. I ought to add that I have written about the breweries in the same order as the presentations; it was one of those occasions where the audience was split into four smaller groups, and the brewers moved around, from group to group. 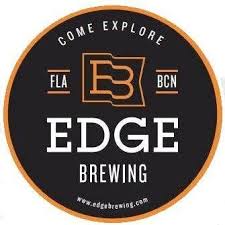 First up was Edge Brewing who were established in Barcelona in 2013 by two Americans. Combining finely engineered American brewing equipment, the best ingredients available and many years of brewing experience, they are now making fresh, genuine, American craft beer for the local market. The brewery is situated in the Poble Nou district of Barcelona. Have a look at the company’s excellent English language website here.

The person giving the presentation was an amiable, ex-pat Englishman. I thought he’d given me his business card, but if he did I appear to have lost it, so unfortunately I can’t tell you his name. We tasted two beers; a 5.0% Bavarian-style Hefeweizen and a 4.5% American IPA. The Hefeweizen represented “yeast”, and had a touch of lemon juice added to counteract the phenolic banana and clove notes normally associated with Bavarian Wheat Beers. The IPA had been hopped with Cascade hops throughout the brewing process, and had also been dry-hopped.

Next up was Quer; a micro-brewery producing small batch beers in the town of Berguedà, which is about 100 km north west of Barcelona. Their contribution to the BBF Brewers Pack, was a 6.0% Smoke Beer, representing “malt”. This dark, copper-coloured beer was brewed using Rauchmalz from the world-famous Weyermann maltings in Bamberg. It certainly reminded me of one of the Rauchbiers produced in that city.

Quer certainly like to push the envelope, and to give local drinkers in Berguedà, most of whom are used to typical golden lager-style beers, something to talk about. This experimentation was evident in the other beer they brought along; a 9.5% Russian Imperial Stout called St. Berian Black. Presented in a wax-sealed bottle, this thick dark beer has a bitterness level of 60 ibu’s, which performed well against the strong, roast malt base.

The third brewery to give a presentation was Cerveses La Pirata. I came across this brewery, and its beers, on my previous visit to Barcelona, in November 2014. The company had a presence at the Biercab gastro-pub, which was close to our hotel. After sampling a few beers there I popped next door, to the adjacent beer-shop, where I bought a few of their beers, plus a rather impressive T-shirt, which I wish I’d worn now to the presentation. What I didn’t know was that at the time of that visit, La Pirata were a “gypsy brewery”, and had been so for over two years; but last year they finally bit the bullet and invested in their own brewery, which opened in September 2015.

The company are based in the town of Súria, which is to the north of Barcelona. The beer they produced for the festival represented “water”; arguably one of the most important ingredients used in the brewing of beer. This was presented in the form of a Gose; a top-fermented beer that originated in the German town of Goslar. The style migrated to the city of Leipzig, where it was something of a local speciality. Gose’s popularity waned during the 20th Century and by the end of the Second World War it had nearly died out.

In recent years the style has seen something of a revival. Gose is brewed from a grist containing a minimum of 50% wheat and belongs to the same family of sour wheat beers which were once brewed across Northern Germany and the Low Countries. The beer is characterised by a lemon tartness, plus a pronounced herbal character. This is because coriander is used alongside hops, to provide flavour. Gose has a strong saltiness; the result of either local water sources or added salt, and acquires its characteristic sourness through inoculation with lactobacillus bacteria after the boil.

La Pirata’s Gose, was the first example of this once, almost extinct style I have tried. At 4.5% ABV, it proved a refreshing drink. Salt is added during the boil, and additionally prior to bottling. I didn’t manage to discover whether coriander was used in the beer, but going on the taste, I would say no. The company also brought along some bottles of their 7.8% Super Oatmeal Stout for us to try. They described this as a “dessert beer”, but by this time, not only were my taste buds becoming a little confused, but the alcohol from all these strong beers, on top of those I had already consumed at the festival itself, was starting to kick in.

We ended up sampling the last beers of the session, courtesy of AS Cervesa Artesana (AS for short). AS are another Catalan brewery, based at Montornés del Vallés, near Barcelona. Their website is in Catalan only, so there is little point in including a link to it, but the nice young couple doing the presentation, were enthusiastic and very knowledgeable. They brought along a rather nice 7.8% Double IPA, which represented “hops”. Orange in colour and with citrus aromas, this was a well-balanced and very enjoyable IPA. We were told that American Chinook hops were used for bitterness, with Simcoe for flavour and aroma. The beer is continuously hopped throughout the boil, and then dry-hopped additional Simcoes, during maturation. For some reason the beer is fermented using an Australian yeast.

The second beer from AS, and the last of the session, was a 9.0% Imperial Stout, called Ace of Clubs. My notes were getting rather sparse at this stage, and all I have written down is “Really strong aroma”, “Simcoe hops again.”, and “Italian liquid yeast”. Make of this what you will.


Although a lot was crammed into this session, for me it provided a valuable insight into the craft beer scene in Catalonia. I liked the informal presentation style of the breweries concerned, and whilst there were obvious language differences, the appreciation of good beer transcends national boundaries and beer speaks its own language. I am really glad therefore, that I attended this presentation.

I was joined at the BBF Brewers Pack session by fellow blogger, Martin Voigt. Martin is originally from Frankfurt, but now lives and works in Vienna where he produces the excellent proBIER site. Described as “Der Bierblog aus Österreich” (the beer blog of Austria), Martin’s blog is a professional site, with informative and in-depth write-ups, plus some excellent high quality photos. Take a look here at his report on the Barcelona Beer Festival, and you will see what I mean.

Whilst on the subject of photos, I didn’t manage to take any decent ones at the presentation so, where appropriate, I have lifted a few from the websites of the breweries involved. I’m sure they won’t mind, given the free publicity they’ll be getting, but if they do, then I’ll take them down.

A couple of final points: Martin and I were due at another session on the Saturday evening, where we would have an opportunity to meet the legendary Mikkel Borg Bjergsø, the man behind Danish Mikkeller Brewery. Unfortunately we both received an email early on Saturday morning from Joan, informing us that Mikkel was unable to travel to Barcelona, due to the illness of a member of his family, so the session had been cancelled. It was perhaps just as well then, that I didn’t take my copy of Mikkeller's Book of Beer with me, for him to sign.

The four special edition Festival Beers were available in a commemorative presentation bottle pack. It was pointless me buying one though, as I was travelling with cabin baggage only.