Just over a fortnight ago I was sitting in the Angel at Swanton Morley, trying to read the local paper in the light of the dimly lit bar. It was cold outside and I was sitting as close as comfortably possible to the warmth emanating from the logs burning brightly in the grate of the large open fireplace.

I was in this Norfolk village because the family bungalow is situated there and, whilst dad is no longer living there, it makes a convenient base for me and other family members to stay whilst visiting him. The bungalow will have to be sold before too long; properties start to take on an unloved air when left empty for long periods, and there is also the issue of funding dad’s residential care home fees, but for the time being at least it serves the purpose outlined above.

I had driven up to Norfolk through the Friday afternoon traffic, and although I had taken a diversionary route in order to visit the CAMRA National Inventory-listed Cock at Brent Eleigh, I was feeling rather tired after my drive. I was also rather hungry, so my plan was to walk the short distance to the Angel for a bite to eat and a few pints.

Unfortunately I fell asleep in front of the tele, whilst watching the news and it was around 7.15pm that I walked into the pub. I ordered a pint of the guest ale (Oldershaw’s Mosaic Blonde), and as the barmaid was pulling my pint I asked her what food was available that evening. To my horror she replied that the kitchen closes at 7pm. Had I been paying attention, I would have seen the times when food is available clearly displayed on a board outside, but this left me in a dilemma.

If I hadn’t just ordered a pint I could have walked down to Darby’s; the pub at the other end of Swanton Morley, where I knew from past experience I could get a meal. It was a twenty-five minute walk away, and the alternative would have been to have nipped back to the bungalow and picked up the car. I didn’t want to do that, as my intention was to have a few pints, but as I was paying for my beer, the pleasant young girl behind the bar must have noticed my disappointment and taken pity on me. She offered to rustle me up a sandwich, which would at least assuage my immediate hunger, save me a long, cold walk and allow me to enjoy a few pints without putting myself and other road users at risk.

I accepted her kind offer and ordered a ham and cheese sandwich. So whilst sitting close to the warm glow of the fire, I started paying attention to what the other customers in the pub were drinking. There were about half a dozen or so; some of whom kept nipping off to the backroom for a game of pool.

I had noticed on previous visits to the Angel that Hop Back Summer Lightning seemed a permanent fixture on the bar, and after seeing several pints of it being pulled, I decided that would be my next beer. I was glad I went for it, as it was every bit as good as I remembered. Described by the brewery as the “Original Summer Ale”, and a “Trendsetter in the brewing industry”, this pleasantly bitter, straw coloured beer is brewed all year round. At 5.0% ABV and with a lovely fresh, hoppy aroma, combined with an intense bitterness, Summer Lightning is an old favourite of mine.

I say old favourite, but it’s not a beer I see around  much these days, and this leads me to ask why? Hop Back Brewery are quite right to describe this beer as a “trendsetter” for whilst it was not quite the first “Golden Ale” on the scene, Summer Lightning was the first such beer to take the brewing world by storm and introduce a new style of pale, well-hopped and quenching beer in an attempt to entice younger drinkers away from heavily-promoted lager brands. I seem to recall it was enormously popular during the 1990’s, and was a “must stock” brand in many pubs, so why is the beer not as widely available today? 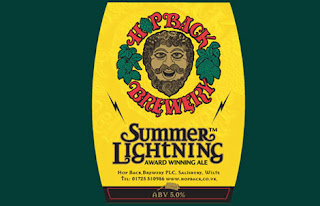 I believe that Summer Lightning was eclipsed by other paler and even more intensely hopped beers (Dark Star, Roosters etc), and this, coupled with the advent of beers brewed using North American hop varieties, with their intense citrus notes (think Thornbridge, Brew Dog, Magic Rock et al), knocked Summer Lightning off its perch and led to it almost being sidelined.

This is great pity, as it is still the classic English Summer Ale, despite being brewed all year round. It was certainly very good in the Angel a fortnight ago; so much so that I had to have a second pint! The fact that this 5.0% beer is a permanent fixture at this GBG-listed, CAMRA-friendly pub, speaks volumes for its quality and character.

It may not have the intense citrus aromas of an American Pale Ale, but as a fine example of a beer brewed using classic English hop varieties, such as East Kent Goldings and Challenger, it more than holds its own. Do therefore give it a try if you come across it on your travels.
Posted by Paul Bailey at 09:49

Yes, it's still a good pint. Another we don't see so often nowadays is Exmoor Gold. These beers seem to be unfairly neglected because of the current preference for having your taste buds ripped off by extremes of hops and citrus flavours.

You are absolutely right Nev, about beers like Summer Lightning and Exmoor Gold falling out of favour. It’s ironic really when you consider they were both pioneering beers which set the bar for a whole host of imitators. Both make a pleasant change from the hop monster double, imperial IPA’s flooding the licensed trade at the moment.

Don't recall drinking Exmoor Gold, but I'm definitely fond of Summer Lighting, though I haven't come across it for several years now.It was a pleasure to drink,while to be frank some of the APAs can be too assertive for my Kentish tastes. Having said that, I find the newer sub 4%abv pale ales such as Hophead and Plateau much more approacheable.

Agreed - I've had plenty of excellent pints of it over the years, including in the brewery tap in Salisbury. The last one I had, though, was pretty dire :-( The pub's fault, not the brewery.

It's also well-known as a bottle-conditioned beer, but the last two I've bought have been brewery-conditioned, which was a bit disappointing. I'm not sure if they've switched all the production, or just some.

The similar, but less strong, Crop Circle is also good.