Why Nottingham is Not For Me 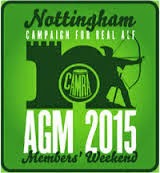 I shan’t be going to next month’s CAMRA Member’s Weekend and AGM which, this year, takes place in Nottingham. Work and family commitments have conspired against me, so regrettably I am unable to spare the time necessary in order to attend.

In some ways this is a great shame, as from what I understand Nottingham is a great city for beer, with much to offer the drinker and beer connoisseur. As well as a host of award-winning breweries, Nottingham also has some great pubs, including one of the few in the city which I have been in; the ancient and quite unique Olde Trip to Jerusalem, which nestles below the imposing Castle Rock.  The weekend would also have afforded the opportunity to catch up with friends both old and new from within the campaign.

In other ways though I am quite pleased not to be going, as the conference proceedings themselves are of little or no interest to me. Reminiscent of a 1970’s Trades Union Conference, this part of the weekend really shows that CAMRA is living in the past and has refused to move on, as I will demonstrate later. A glance through the order paper, published in this month’s “What’s Brewing” confirms this introspection, as apart from the eminently sensible motion proposed by Tandleman and his CAMRA colleague Graham Donning which draws attention to the outrageous practice adopted by many pubs of charging a premium for half pints, there is nothing really of interest and certainly little of relevance to today’s fast changing beer scene. 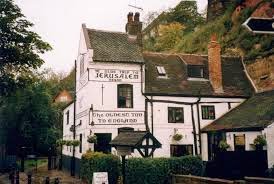 Among the less sensible motions is one which effectively rules out future CAMRA involvement in the “There’s a Beer for That” campaign, and one calling for the campaign to withdraw its support for the Cyclops scheme of beer tasting/assessment, on the grounds that it has expanded to include all beers. Yes let’s isolate ourselves from the brewing industry and burn all the bridges that CAMRA has so carefully built over the years with brewers and publicans alike.

The most controversial motion though, is Number 20; the last one on the order paper. It reads “This conference proposes that CAMRA shall oppose fracking and unconventional hydrocarbon exploration and extraction on both a local and national scale, as they pose a real and substantial threat to the production and quality of real ale”. Yeah, right on Swampy!

I am assuming that the relevance of this motion to CAMRA is the potential effect this practice could have on underground water supplies (aquifers). Not withstanding the controversy behind fracking, the jury is still out on the practice, and anyway areas suitable for shale gas extraction in the UK are both limited and fragmented; unlike the United States and Canada. In addition, the current record low price of oil makes even exploration for ground-sourced hydrocarbons unviable at the moment.

To return to the potential threat to water supplies; these days many underground sources are unsuitable for brewing because they contain high levels of nitrates, which originate from agricultural run-off, so the whole point of the motion is rendered  irrelevant anyway.

Irrelevant until one looks deeper at the motive for including this motion on the ballot paper! Any branch, of individual member, can submit a motion for debate at conference, but before going forward all motions are first vetted by CAMRA’s equivalent of the Politburo. Far worthier motions than this one have been rejected in the past, and I’m certain many will have been discarded prior to this year’s conference. This then begs the question is CAMRA lurching further to the left? Or is it unashamedly trying to woo the green vote?

Either way this issue is at best a fringe one, and at worst totally outside the Campaign’s remit. For me this is yet further proof that CAMRA has lost its way and is in grave danger of being sidelined as an irrelevance in today’s fast evolving and rapidly changing beer industry. 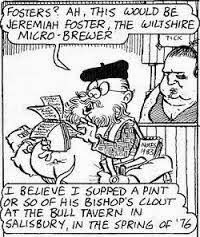 CAMRA currently boasts a membership in excess of 170,000 which is pretty impressive until one considers that its policy is determined solely by those members who attend the National AGM. The last set of figures I have seen for the Members Weekend – National Conference are from the Norwich Conference, which took place in 2013. I was one of the 1,300 members who attended that event and, enjoyable though it was, when viewed as a total of the current membership, this figure is less than 1%, which quite frankly is appalling.

That issues of policy, membership fees, campaigning issues etc can be decided by less than 1% of the total membership is scandalous, and belies any attempt by CAMRA to promote itself as a democratic organisation responsive to, and in touch with the needs of its members. The fact that conference motions are pre-vetted by a central committee (shades of Joseph Stalin here!), before they are even put before the meeting is nothing short of a disgrace.

There are already serious rumblings amongst the grass-roots membership, and there is a small, but increasingly vociferous Unofficial CAMRA Facebook group. The Provisional CAMRA, perhaps? It really is time for the organisation to wake up and smell the coffee, or should that be the malt and hops?

It is a disgrace that my motions to adopt cooking lager into the fold alongside pong and cider are routinely discarded. This year my motion to ensure quinoa was available at all festivals was dismissed. Next year I'm thinking of a motion to ban tankard holsters on belts.

Camra lurch further to left? Not possible. I have never liked them, what a bunch of commies.

Thanks for the link to the Provo CAMRA Facebook page I started. I hope to make it to Nottingham to fight from within. If you want a chat over what took place you know where to find me. Duncan, Orpington Liberal Club.

Don't worry Paul. I for one will be putting the sensible case.

Having had a quick look at the unofficial CAMRA Facebook page it appeared to be far more out of touch than the organisation itself, rather like the Green Party is to the Labour Party. And I see unhinged anti-pubco loon J Mark Dodds is a prominent contributor.

Cookie, does the ban on tankard holsters include Morris Men as well?

When I get a spare moment Duncan, I will take up your offer of a chat. There is quite a groundswell of opinion about the direction CAMRA seems to be taking, and also about how out of touch the people at the top are. Glad you liked the link to your Facebook page.

Sorry I won’t be able to meet up with you for a few jars in Nottingham, Tandleman. Despite my concerns about CAMRA I was looking forward to attending the AGM and exploring the pubs and tasting the beers of Nottingham. Unfortunately my mother’s illness and recent passing, coupled with sorting out appropriate and ongoing care for dad has eaten into both my annual leave and free weekends, but my son and I have made a definite pledge to attend GBBF this year, so we should be able to catch up then.

Ian and Mudge. I will check out was happening on the unofficial Provo-CAMRA front and report back. I do know at least one other, highly dissatisfied and quite prominent local member who is also extremely concerned about the direction the campaign is heading in.