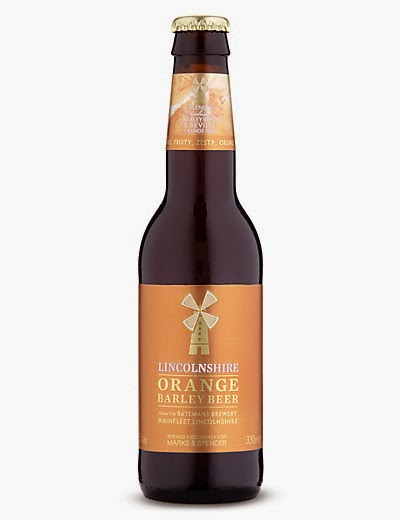 It was bargain-basement time this weekend at our local Marks & Spencer, with a couple of slow-moving beer lines being sold off cheap. On Saturday I picked up a few bottles of M&S Orange Barley Beer; a 5.5% offering from Batemans of Wainfleet. Priced at just 90p per 330ml bottle this beer was a bargain which was too good to miss. The company claim “The beer is infused with bitter Seville oranges to create a fantastically fragrant and zesty full-bodied tipple that pairs beautifully with chocolate puddings.”

Also reduced to sell was M&S Norfolk Nip Barley Wine7.0% from Woodfordes. Priced at £1.40 a bottle, this beer represented another bargain, and even if the shelf life on this beer is short-dated, I purchased a number of bottles for laying down. According to the bottle the beer is “Brewed for us by Woodforde’s Broadland Brewery in Norfolk to an original recipe from 1929, this classic English beer blends roasted East Anglian barley and Maris Otter pale, crystal and chocolate malted barley with Goldings hops.”

They will come into their own, come the autumn, although it’s been so cold these past few days that I’m sorely tempted to crack open a bottle later tonight!


I don’t know if these reductions are unique to the Tunbridge Wells store, or whether they apply nationally, but if you are a fan of either of these two beers, or you fancy looking out for other bargains, then get yourselves down to your local Marks and Sparks.
Posted by Paul Bailey at 21:52

Have you been in store recently, I've noticed a big increase in range, Single Hop Jester a favourite but they also have a new range of Craft beers, going to test them this weekend with a BBQ!

Richard, M&S seem to like tinkering with their range, and are obviously testing various sectors of the take home beer market, as well as occasionally pushing the boat out.

Personally I am disappointed that they dropped the excellent Greenwich Smoked Bock Beer from Meantime. Perhaps it didn’t sell well, being a little too extreme for many people’s tastes. I loved it though.

I have seen the new Craft Beer range, but haven’t tried any of them yet.