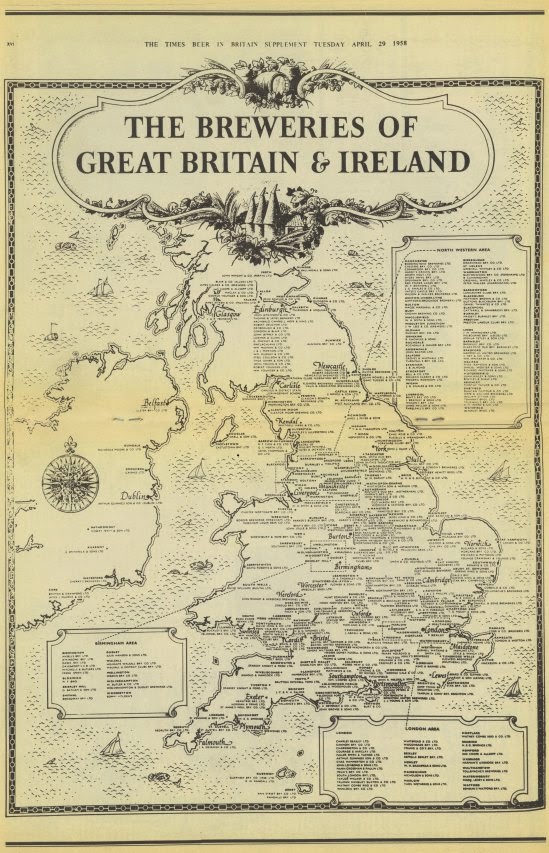 Although my recent post about “ticking” was meant to be thought provoking, without being controversial, it did attract a certain amount of criticism, particularly from one or two individuals. The post was intended to highlight this extreme form of beer appreciation, showing the lengths some people go to in pursuit of their aim.

I was going to say “in search of the perfect pint”, but that would not really be the case with your hardened ticker, as for them it is more of a numbers’ game than anything else. However, whilst appearing in some peoples’ eyes to be overly critical of the ticking/scratching/scooping fraternity I can understand how people can get drawn into this obsession. In fact, it nearly happened to me, and at one point I was in danger of becoming a “ticker” myself.

Like “Mick the Tick”, who I referred to in the article, I too was inspired by the first CAMRA Good Beer Guide I acquired; although in my case it was a year before Mick’s, and the edition in question was the very first GBG, published in 1974.

Seeing all the brewery names listed in the back of the guide fired me with a desire to try and sample as many of them as possible. Now excluding breweries belonging to the “Big Six” brewers, there were only around 90 breweries, operating within England and Wales, (the first GBG did not cover Scotland). Managing to sample beers from all of these therefore should not have posed too much of a problem

The only trouble was that aged just 19 and with no car, or other transport of my own, the chances of travelling the length and breadth of the Britain, in order to sample these beers, was pretty much zero.  Still, living in Manchester, as I was at the time, did afford me the opportunity to enjoy the likes of Boddington, Burtonwood, Greenalls, Holts, Hyde’s, Lees, Marstons, Oldham, Robinsons, Sam Smiths  and Thwaites; even if some of them did take a bit of tracking down. I also ought to include big-brewery beers such as Draught Bass and Wilson’s; both of which were readily available in cask form.

The advent of beer festivals changed all that; as did my purchase of Frank Baillie’s pioneering guide “The Beer Drinker’s Companion”. The latter was a comprehensive guide to all of Britain’s breweries, with detailed information on every one still brewing, the beers they produced (both draught and bottled), plus information on how and where to find their pubs.

A student friend and I, both of whom shared a passion for Real Ale, made a pact that we would attempt to sample (the term “tick” did not exist back then), as many cask beers as possible; the only proviso was that we had to have a pint of each in order for it to count! As time went on we moderated this requirement to half pints instead. My interest was mainly confined to beers listed in the CAMRA Good Beer Guide, so unlike your typical ticker I never went out of my way to sample odd or “one-off” beers.

In addition I never kept a list of my “scoops”, but did mark off beers in the Breweries Section at the back of the GBG. Every year, I would transfer this information across to the new edition of the guide, building up a reasonable number of beers, but never getting into four figures. Pretty amateurish, compared to serious tickers, but it was bit of fun looking back to see which beers I had tried over the years.

I kept this up until about 10 years ago, when the explosion in the number of breweries and different beers made me realise what a totally futile and pointless task this was. Did I have a lucky escape? Not really, as I could see the futility in the whole exercise, and besides over the years I learned to appreciate a decent pint for its own sake, rather than just another name to be crossed off in the back of the GBG. Today I would say the occasion, the surroundings and the company I am with, all play an important role in my appreciation of a good pint, and whilst I am never averse to trying something new, sampling a beer, especially a “one-off”, or a re-badged brew,  just for the sake of it isn’t really my style.

People collect many things; not just different beers, and while there obviously are women who collect things, on the whole spotting, ticking, twitching etc seem to be largely male pursuits. During my formative years, I dabbled in stamp collecting. I still have an album of stamps somewhere in a box in the loft. During my primary school years, a whole group of us collected “bubble-gum cards”, with topics ranging from Flags of the World to the American Civil War.

By secondary school this interest waned, only to be replaced during the Sixth Form by building up a collection of progressive rock albums. The “collecting bug” never really leaves some people and whether they turn into a train-spotter, a beer ticker or a person who spots Eddie Stobbart lorries, the obsession to amass data remains the same.

Other factors also come into play, such as the sense of belonging which ensues from being amongst like-minded people; something which fits in comfortably with a person’s genuine desire to be accepted. With the number of breweries in the UK now approaching the 1,300 mark and around 4,000 permanent beers, plus nearly 6,000 special, or seasonal brews available, it would be a tough job for even the most dedicated ticker to work his way through that lot. Also, given the constantly changing and evolving nature of the market, it has already become nigh impossible to keep tabs on the beer market as a whole.

For my part I will continue to enjoy good beer wherever I come across it, but equally I will try and look for decent pubs and bars in which to enjoy it. As I have said before, “A pint amongst friends”, still remains one of the greatest pleasures anyone can have in life, and whether that pint is a glass of the latest über-hopped, craft-beer, in a hipster-filled bar, or a pint of Harvey’s Sussex Best in an unspoilt rural pub nestling in the shadow of the South Downs, I’ll drink to that!