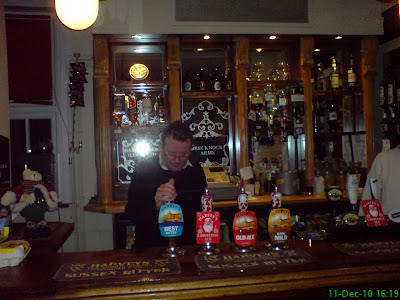 After five, or was it six, years of holding our annual Christmas meal at the Rose & Crown in Halsted, West Kent CAMRA broke with tradition and moved the event to the Brecknock Arms at Bells Yew Green. The decision to move the venue was partly influenced by the departure last summer of popular landlord, Bob from the Rose & Crown, but also by the desire to go somewhere else for a change.
Unfortunately, the Brecknock will probably not be hosting the event next year, as licensees Joe and Charlotte are handing the keys back to Harvey's in January, and leaving the trade altogether. This is a great shame, as the couple have put a lot of effort into running this small, Victorian local situated just outside Tunbridge Wells. 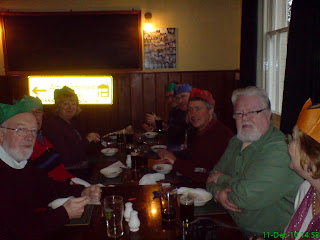 Without wishing to dwell too much on these changes, the meal itself was a great success. Twelve members in total turned up, with most of us travelling by train from Sevenoaks, Tonbridge or Tunbridge Wells. Charlotte had stuck several tables together in the pub's main bar, which was decked out in suitably festive attire. There were four ales on sale in the pub; all of them from Harveys. Alongside the staple Best Bitter; Dark Mild, Old Ale and Christmas Ale were all available on hand pump, the latter being a rare, but welcoming sight at this time of the year.
Following a few pints, and after warming ourselves in front of the pub's welcoming log fire, we sat down to enjoy our meal. Most of us opted for the traditional roast turkey, complete with all the trimmings, although roast beef was also available as an alternative. After a suitable interval, we moved on to the dessert, with many of us opting for Harvey's Christmas Pud. This was the cue to sample the Christmas Ale; half pints only mind you, as at 8.1%, this rich, dark amber ale is a beer that needs to be treated with the utmost respect. 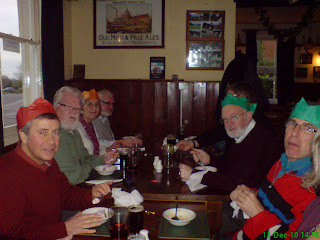 Coffee and mince pies followed, after which there was time for one last quick drink, before taking our leave of Joe and Charlotte and walking the short distance back to the station. Most of the part alighted in Tunbridge Wells, with the intention of heading up to the Grove Tavern. Myself, son Matt, plus friend Don however, decided to call it a day and stayed on the train back to Tonbridge. All three of us were just too full to attempt to drink any more beer! All in all though, it was a good afternoon, and the prelude to more over-indulgence over the festive period!
Posted by Paul Bailey at 17:58