Christmas Ale to be Hit by Tax Hike 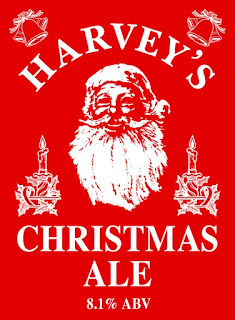 Sitting in the cosy post-Christmas meal afterglow of the Brecknock Arms yesterday, sipping a couple of halves of Harvey's Christmas Ale, left me with the nagging thought that this excellent strong, seasonal offering is going to be one of the beers affected by the government's proposed tax hike on strong beers. As many people are aware, the people we entrust to look after our interests are planning quite large rises in tax on all beers with an abv above 7.5%.

Their purpose is to try and crack down on problem drinkers, and having already hiked the duty on "white cider" (Diamond White, Frosty Jack etc), the government have now set their sights firmly on those people who enjoy the odd can or three of "tramp juice" (Carlsberg Special Brew, or Tennents Super to you and I). What they don't realise is that people with a serious drink problem will either move onto a different drink, or find the money, somehow, from elsewhere. This is the trouble when politicians think they can micro-manage people's behaviour, and attempt to control how they spend their money.

The unfortunate effect of all this, of course, is that strong seasonal beers, such as Harvey's Christmas Ale, and a host of others, will face a significant increase in their retail price, just to stop the odd hobo getting off his face with them! Now we all know that these rich, warming and well-crafted beers are not "park bench" material, but when the powers that be interfere in a mis-guided attempt to control a problem that only affects a relatively small number of people, this is what happens.

For the record, at £2.30 per half pint, Harvey's Christmas Ale is dear enough already. I can't see the odd "knight of the road" hot-footing it down to the nearest Harvey's pub, to get trollyed at those sort of prices! Further more, it is impossible to rush such a strong and rich beer anyway, and a few halves is plenty enough for most people. Unfortunately, these superb examples of the brewers art will either be priced off the bar next year, or will be brewed to a strength that is below 7.5%; thereby losing some of their essential character!
Posted by Paul Bailey at 15:21

It is disturbing to think that it's likely most xmas beers will be <7.5% ABV next year :-(

I fear you are right, Ed. A sad day for all of us who enjoy the occasional glass of strong ale!