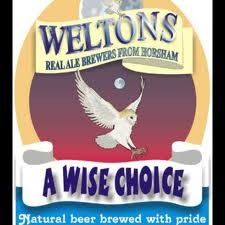 Earlier this week our planned CAMRA Christmas social to Otford had to be called off. The reason; bad weather, and the risk that the trains might not be running, or the possibility that the last ones back might indeed be cancelled.

Not wishing to end up stranded in Otford, a small group of us decided to meet up instead at the Humphrey Bean, JDW's Tonbridge outlet. I had some last minute shopping to attend to, so was a bit late in arriving, but when I eventually made it to the pub found it bustling and pleasantly busy, but not full to bursting point. I was pleased to see a reasonable selection of ales on offer, and settled for a pint of Smoked Porter from Welton's Brewery. This proved to be a good choice, and I remarked on this fact as I joined my companions at their table.

The beer has a strength of 5.2%, and being a porter is of course almost black in colour. I couldn't really detect that much smokiness, but it was there, subtly lurking in the background. My friends also gave it a try themselves and agreed that it was a very good beer. Smokiness is something that people either love or hate in a beer. I love it, and indeed in a few days time am off for a short break in Bamberg; the centre of "Rauchbier" production. Beers brewed there, such as Schlenkerla, have considerably more smokiness in their palate than Welton's offering, but in no way should this denigrate the attempt of this Horsham-based brewery to brew something bold and different, and help introduce UK drinkers to the delights of "smoke beer". Therefore full marks to Ray Welton and his team for coming up with this version.

I had intended to move on to the Santa's Wobble, from Hogsback Brewery, that I'd noticed earlier, but by the time I was ready to order a pint, it had run out. At 7.5% this was probably just as well, especially as I had work the following day, so I stuck with the Smoked Porter. If you come across this beer, do give it a try, although I would imagine so far as JDW outlets are concerned, it is only available locally.

I probably won't get another post in before the big day tomorrow, so would like to take this opportunity to wish one and all a very Merry Christmas and a Happy and Prosperous New Year.
Posted by Paul Bailey at 20:00