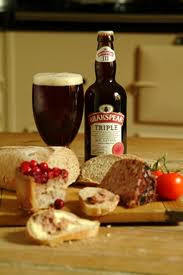 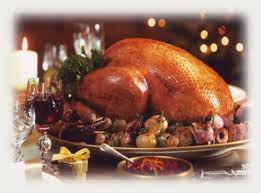 Over the past few years we've always had guests joining us for Christmas dinner, and invariably they've preferred wine to beer. I've normally felt obliged to join them, as it's not often I get the chance to enjoy a drop of fermented grape, but this year, there'll just the three of us sitting round the table. My wife Eileen doesn't really drink, whilst son Matt likes his "cooking lager". This leaves me free to enjoy a selection of whatever beers take my fancy.

I've been building up a stock of bottles over the past few weeks, which includes several bottles of Fullers 1845. I believe that this strong, full-bodied ale will be just right to accompany the roast turkey, which can sometimes be rather a dry meat. It is also important that the beer does not overwhelm the assorted vegetables and trimmings, which I prefer to the bird itself!

In reserve I have a large 750cl bottle of Meantime IPA, some Young's Special London Ale plus a bottle of Brakspear's Triple. On reflection, the first two might be a touch too bitter, so the Triple would be a better bet. I noticed that Mark Dredge was recommending, amongst a whole host of different beers, Chimay Bleu, to go with the turkey, and I know from past experience that this is a good accompaniment. I'm sure other similar strength Trappist beers would also fit the bill, but as Chimay Bleu is readily available from Waitrose, I might have to grab a few bottles next time I'm down that way.

I'm certain that most of the above named beers would also go well with the cheese course, but what about the Christmas pud? Last week, at our CAMRA Christmas Meal, we had draught Harvey's Christmas Ale as an accompaniment, and it was a good match. I've probably left it a bit late to get some bottles of this superb 8.1% barley wine in, especially as I've not been able to get over to Tunbridge Wells this weekend due to the heavy snow. This also precludes another beer that has worked for me in the past; Samuel Smiths Imperial Stout. Robinson's Old Tom might fit the bill though, and I noticed it's on offer at Sainsbury's at two bottles for £3.00.

As for a post-breakfast, mid-morning beer?, well I've got several bottles of Fullers London Porter in stock, as well as a couple of bottles of Beau Porter - the new seasonal beer from Royal Tunbridge Wells Brewery. One thing's for sure, I shouldn't go thirsty this Christmas, and with a pre-New Year trip to Bamberg planned as well, there's certain to be a lot more fine beer to be drunk over the festive period.
Posted by Paul Bailey at 21:46

I know you're not a Sheps' fan, but I bought some 7% ABV Shepherd Neame Christmas Ale which I intend to have as my pre Christmas dinner aperitif :-)

Haven't tried the Beau Porter - where did you get the bottle? I'll have to search it out.

Curmudgeon, you're right about me not being a Sheps fan, but in the past some of their Christmas offerings have been quite drinkable; especially the stronger ones, brewed with a hint of spice or fruit. Enjoy your pre-Christmas dinner aperitif!

Mark, I bought the Beau Porter from the Bitter End Off-licence, in Camden Road, T. Wells.
I think I remember RTWB owner Simon Hughes saying he was hoping to get his bottles into the new off-licence, that's opened in the old Threshers shop in Tonbridge High Street, so it might be worth checking there first.

Enjoyed reading your Christmas selection; must get up to Utobeer in the New Year and pick up some of your recommendations.

But I won't be encouraging the Sheps Christmas Ale... It wasn't for me!

Thanks Mark, I must pop into the Wine Library as it looks really nice from the outside.
Good luck with trying to persuade the owner to stock some more interesting beers. If you need some back-up, or morale support, let me know.