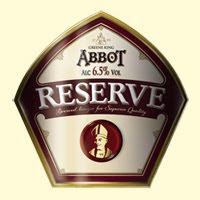 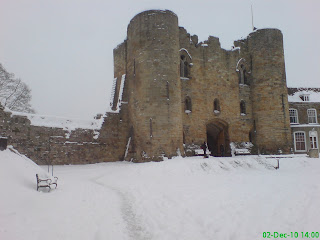 After nearly a year since I sampled the bottled version of Greene King's Abbot Reserve, I finally got the chance today, to sample the draught version. Like the bottled, I am sorry to say I am not impressed. More about that in a minute.

Abbot Reserve feature's on this year's list of Christmas Ales in JDW outlets, and for the second day in a row, I found myself in our local Wetherspoon's. A fall of nearly a foot of snow, Wednesday night/Thursday morning had prevented me getting into work. Given the extreme weather conditions, I didn't even attempt to try getting the car off the drive, and a check on the National Rail Enquiries website revealed there were virtually no trains running. Although the snow abated last night, road and rail conditions were pretty much the same, which meant a further enforced day away from work.

Like the previous day, I had some shopping to get, both for ourselves and our elderly neighbours, so off I trudged, through the snow, down into Tonbridge. I had called into Wetherspoons earlier in the day for a coffee and, after the poor choice of ales on the previous day, was delighted to see the pump clip advertising the Abbot Reserve. After clearing some of the snow off the drive, getting a few Christmas cards written out and the aforementioned shopping, I finally made it back to the Humphrey Bean (our local JDW) just after 3pm.

This turned out to be a good time to call in, as there was virtually no queue at the bar. I ordered a pint of the said beer, paid just £1.85 for it, using my last CAMRA JDW voucher, and sat down to enjoy my pint. As expected, it was mid-brown in colour, with just a loose head on top. There was virtually no aroma to the beer (hops or otherwise), and taste wise I found it pretty disappointing as well. The 6.5% abv strength was quite evident, and there was a pronounced spicy pepperiness from the hops, but I found the beer totally lacking in depth. Although the spiciness was present at each mouthful, it quickly vanished once the beer was swallowed. There was certainly nothing to back up the initial tastes of the hops and the alcohol.

This, I thought is a very one-dimensional beer, and I was left wondering where were the fruitcake and toffee flavours described on the brewery's website? West Suffolk CAMRA are also shown on the website, singing the beer's praises, so either I sampled a duff cask (I don't think so, as it was fresh on this morning), or I am missing something? Again, I don't think so, as not only was the bottled version disappointing, but I have also seen other poor reviews of this beer. It's a shame really, as I know Greene King are trying hard to expand and improve their cask portfolio. But for me personally, it was even more of a shame as I had so been looking forward to sampling this beer!
Posted by Paul Bailey at 20:05

Small window of opportunity to catch a beer in good condition in there. Biggest problem of late, is that everything is served too cold.
Someone is responsible for sticking it in the good beer guide and someone should be responsible for removing it! Having an interesting and ever changing beer list is not a good reason for inclusion, if they can't get their act together and learn some cellar skills.

Anonymous, the beer in JDW is served slightly on the cold side, but regardless of your thoughts on their cellarmanship skills, the Humphrey Bean does tend to turn its beers over very quickly.
As for its incluson in the Good Beer Guide; the decision was taken at a selection meeting, that was publicised in advance, and voted on by all those in attendance. For the record, I did not vote for the pub's inclusion, but respect the decision of the majority who did vote for it.

From the comments you make, you obviously care as to which pubs are selected for the guide, so why not come along to the next selection meeting, that takes place at the end of January, and make your views known?

I suspect the problem with the Reserve was down to JDW as I had a really good pint of the stuff last week in a local spoons. Some days stuff is good and at other times it leaves a bit to be desired.

Paul, the fact that my experience of draught Abbot Reserve closely matches that of the bottled version, does tend, in this instance, to rule out poor cellarmanship in our local JDW. I think the main problem, is that the beers are served too cold. This is not a problem in summer, but in the depths of winter they could do with being a few degrees warmer!

However, I will give GKAR another try when I see it on sale again.