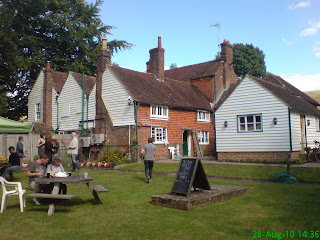 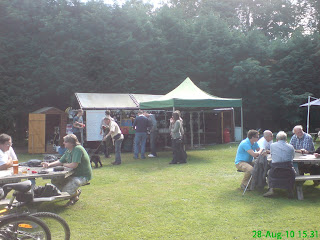 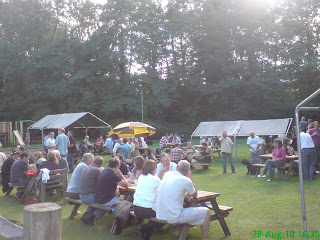 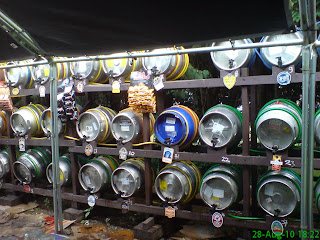 After a week of wind and rain, Saturday dawned clear and bright. It was still a bit windy, but a least the sun was shining and, what's more, there was a beer festival to attend. I have posted before about the Halfway House at Brenchley, and its beer festival, but the day in general, and the event in particular, were both excellent so I am going to write about them both again.

Five of us set out to walk from Paddock Wood station following a by now familiar and well-trodden route, climbing up through apple orchards, with the odd plantation of pears thrown in for good measure. We were rewarded with several impressive views across the Weald towards the Greensand Ridge and the North Downs, before dropping down into Brenchley and the Halfway House.

When we arrived the festival was in full swing, and we were greeted by other local CAMRA members and friends who had either walked from a different direction, or who had travelled by bus. We grabbed a table outside in the extensive garden and then got stuck into the impressive range of beers that landlord. Richard Allen had laid on. According to the programme there were 75 beers in total, although not all were available at any given time. Even so there were plenty to choose from, and plenty to please even the most discerning of palates.

The beer had been carefully selected by Dave Aucutt of East-West Ales, and Dave joined us on our table for a while. We had an interesting discussion about SIBA, breweries and the state of the industry in general, and Dave recommended a number of beers to try. I have to take my hat off to him for one recommendation in particular; namely Highland Dark Munro, an absolutely stunning dark ale, with just the right balance of roasted malts and hop bitterness, and a worthy past Champion Beer of Scotland. Other beers that impressed me were Harvest Pale from Castle Rock, which was Champion Beer of Britain at this year's GBBF, plus Elland Nettlethrasher. I also particularly enjoyed Hawkshead Bitter and Loddon Bamboozle.

As I said at the beginning of this piece, we were lucky with the weather which stayed dry right until the time we left. There was a fantastic atmosphere about the place, with a good mix of people all enjoying the beer, the sunshine, the barbecue plus each other's company. There was something quintessentially English about the festival set in this extensive pub garden surrounded by some attractive rural scenery. For me, and I'm sure many others, it formed the perfect end to what has been a really good summer.

We left some time after seven, walking back to Paddock Wood by a slightly shorter route across an abandoned golf course. Like with the outward journey, we have walked this route several times, and each time have noticed how nature is slowly, but surely taking over what was once a carefully manicured and artificial landscape. We had the odd light shower on the way back, but nothing worth stopping and putting our rain-coats on for. A bag of chips, smothered in salt and vinegar bought in Paddock Wood, and ate on the way to the station, was just right after our walk, and formed a fitting end to what had been an excellent day out. Yet again Richard had come up trumps with a beer festival that just seems to get better each time. Long may they continue!
Posted by Paul Bailey at 20:37

Looks like a jolly good festival. Was the beer temperature kept at a decent level?

It certainly was a very good festival Paul, and the beer temperature was fine; chilled water was piped around the outside of the casks.