A Night on the (Pan)tiles 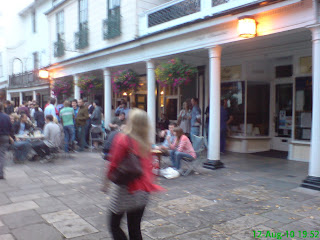 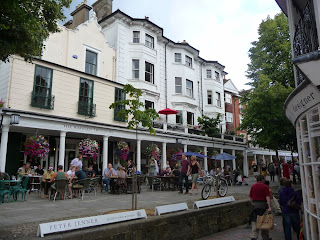 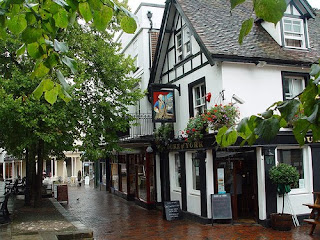 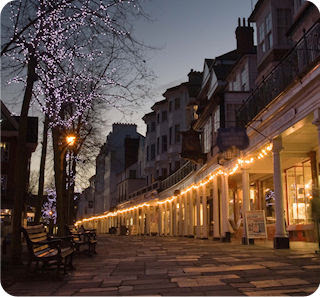 There has been much comment recently about the demise of the pub trade, with some commentators even suggesting that the industry is in terminal decline. Well last night in Tunbridge Wells there was precious little evidence of any drop off in trade, in fact business could be said to be booming.

I met up with some of my friends from CAMRA, for an evening billed as "Jazz on the Pantiles". For those not in the know, the Pantiles is the oldest, (and some would say poshest) part of Tunbridge Wells. It is an area of raised colonnaded walks, with some characterful old buildings around the area where the "health-giving" waters, that gave the town its name, and which made its reputation, issue forth from the ground. Every Thursday evening, throughout the summer, a jazz band performs under the small bandstand halfway along the the Pantiles. Whilst I'm not a huge fan of jazz, live music, especially when its performed out of doors on a warm summer's evening, is an obvious attraction, especially where there's the possibility of a beer or two involved as well.

Half a dozen or so of us therefore met up outside a bar called the Ragged Trouseers, a pleasant, but fairly non-descript conversion of a former shop. When my friend Don and I arrived, having travelled over from Tonbridge, the rest of the party was already waiting for us and, more importantly, had saved us some seats, under the colonnade just along from the aforementioned bar. The place was already busy, right along the colonnade towards the bandstand, but as the Ragged Trousers was serving its beer in disposable plastic glasses, we followed our friend's advice and popped along to the Duke of York instead. Here we purchased our pints (Harvey's Best for me and Doombar for Don) in proper glass glasses, which we then hung onto for the rest of the evening.

The Duke of York is a fine old traditional pub that has thankfully reverted to its original name following a spell when it was somewhat incongruously known as "Chaplins". However, as it is sited a little way back from where the main action was occurring, we rather cheekily walked back along with our pints and joined our friends outside the Ragged Trousers. We then purchased subsequent pints here, transferring the contents from the awful plastic containers into proper glass ones. (We did all have the courtesy to return them to the Duke of York though at the end of the evening!).

As I said earlier, the entire area was getting busier and busier, in fact there were so many people present that the sound of the jazz band could barely be heard. The Ragged Trousers appears to be the "in place" for affluent Tunbridge Wells youth; most of whom seemed to be university students home for the long summer break. It was a job to get served at times in the "Trousers", with people three or four deep at the bar, but it was worth it, especially for the Hop Back Summer Lightning and Larkins Traditional. The attractive young barmaids, as well as many of the female clientele, also proved an added distraction whilst waiting to be served. With so many people taking their drinks outside, I could fully understand why the pub were using disposable plastic containers, even if I detest them.

The atmosphere outside was pleasant and good natured, with everyone having a good time, chatting to their friends and enjoying their drinks. There was not the slightest hint of any trouble; the crowd remaining good natured and friendly at all times. In fact it was the closest I have come yet to the atmosphere and ambiance of a German Beer Garden, although perhaps without the continental temperatures, and it reinforced my view that this concept could still work over here. (See my recent post on Beer Gardens).

This was my second experience this summer of drinking on the Pantiles, see Train now Standing, and I have to say I thoroughly enjoyed it. Unfortunately there is nowhere similar to this where I live in Tonbridge, but on the plus side, Tunbridge Wells is only a short train ride away. I will therefore probably be making a few more trips over to the "Wells" before the summer is out.
Posted by Paul Bailey at 13:35

Thanks for the info., anonymous. I do like a drop of Summer Lightning, so must get up there myself and check it out

Tunbridge Wells has previously to me been somewhere you pass through on the way to somewhere that offers great promise until you arrive, and then you regret having not spent more time sighting the pearls of the 'Wells.

Now I will. You've given me sufficient impetus to stop the car and maybe even procure a night over while sampling some of the fine ales clearly on display.

Thanks for whetting the appetite and painting such a wonderful picture, Paul!

Glad you enjoyed the write up,stormywhether. From somewhere that was a bit down-at-heel, the Pantiles area has certainly improved in recent years, and is definitely worth a visit.