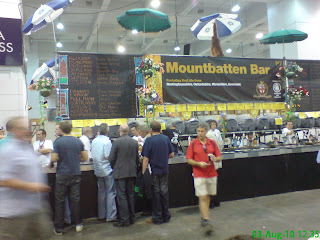 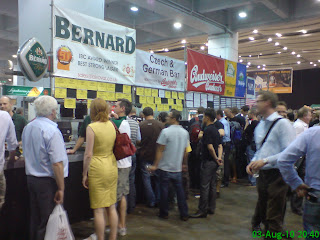 I spent a most enjoyable nine hours at the Great British Beer Festival yesterday (Tuesday). The place was heaving right from the start, but we managed to grab a table and based ourselves there. The range and diversity of beers on sale was absolutely staggering, but unlike my companions I went armed with a plan of sorts. (Actually the Beer List on the GBBF website proved extremely useful, as it allows the user to construct their own list. A scan through the GBG beforehand, saved a considerable amount of time trying to decide what to go for from the programme). The plan paid off not just in terms of time saved either, as all the beers I tried were good (although some were obviously better than others!). Contrast this to my friends' rather more haphazard approach, which resulted in the odd duff beer, and the benefits of forward planning become even more apparent. (I better stop crowing as I know at least one of my companions reads this blog!).

Although I bumped into quite a few people I know, there were just so many people in the hall that it was impossible to seek out everyone. Apologies to any beer bloggers who were there that I didn't manage to catch up with. Some of the bars were extremely busy as well, and at one point I gave up trying to get close to the Bier Sans Frontieres Bar, although I did managed a few beers on a return visit, later on in the proceedings.

As well as good beer, there was some good food on sale. The pasties from the Crusty Pie Company were tasty and filling, and good value too at £2.50. Full marks too to Pipers Crisps, which were excellent. I couldn't resist grabbing some of the tasty free samples they had on the front of their stand every time I walked by (which was quite frequently), but I did buy a few bags to take home as well. The Green Thai Curry I finished on, nearly finished me with its intense heat, and my companions watched with amusement as I broke out in a sweat whilst tucking into it. (I'll go for the Red one next time!)

As for the beers sampled top marks go to Thornbridge for their excellent Kipling described as a "South Pacific Ale", but absolutely wonderful. This was closely followed by Saltaire Cascade Pale, and Marble Manchester Bitter; both fine beers, and with the latter, you could really smell the hops in the glass. Elland Beyond the Pale also hit the spot. I didn't get to sample as many dark beers as I would have liked, although Lancaster Black and Woodlands Midnight Stout weren't bad.

I had mixed feelings about BSF as although they had some absolutely stunning beers on offer, somehow I think that half the pleasure in Beer Hunting is actually travelling to the places where the beers originate, and enjoying them in their native setting. Having said that I did try the 3.8% Bernard Svetle Pivo, which I missed during my trip to Prague last winter, and also the Josef Greif Anna Festbier from Franconia. (We missed Anna Fest by a couple of weeks during our recent visit to the region.)

Unfortunately, owing to work and family commitments, Tuesday will be my one and only visit to GBBF this year. This is a great shame, as not only are there dozens more beers that I would like to sample, but also just being there is such an integral part of the whole GBBF experience. I would also like to go back armed with a large rucksack and stock up on some of the many excellent and hard to obtain bottled beers that are on sale there, although I'm not sure my bank manager would agree that this is a good idea! Another reason why several visits are a good idea, is so not to waste all the important information gathered on the initial one. (Getting acclimatised to the layout, finding where everything is etc,, as by next year you will have forgotten where everything is, and the layout will probably have changed as well!)

For those of you who are still planning your trip there, all I can say that it is an absolutely stunning festival that just seems to get better each year. Enjoy yourselves; I wish I was going with you!!!
Posted by Paul Bailey at 20:22