Partying on a Monday evening - whatever next? 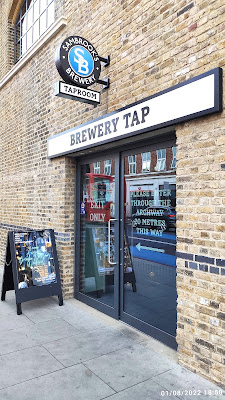 Monday evening might seem a strange night to be holding a summer party, especially when it’s an event celebrating beer and those who write about it. But for those in the know, there is a good reason for the British Guild of Beer Writers (BGBW), to be holding their annual summer on what is generally regarded as a “school night.”

Monday is chosen because it is the evening before the grand opening of CAMRA’s Great British Beer Festival, an annual event that is one of the highlights in any beer drinker’s calendar. It used to be a highlight on mine too, but after not really enjoying the final GBBF I attended (the last festival before the disruption cause by the pandemic), I vowed 2019’s event would be my last.

The grand opening is actually a trade event, at least until 5pm when the general public are finally allowed in. CAMRA’S definition of “trade” is actually very loose, and the invite basically extends to anyone with even the most tenuous of links to the worlds of pubs, beer, and brewing.  Pubs that featured in the Good Beer Guide would usually receive a wadge of tickets, in order to arrange a “jolly” to the festival for the licensee and pub customers, and the same applied to breweries and their staff. 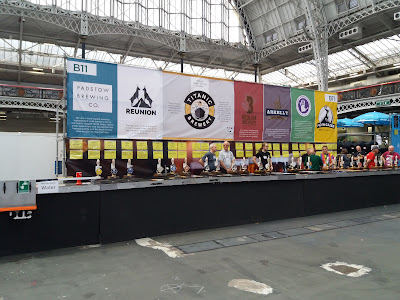 In the days when a group of us would attend the trade day, gaining entrance to the event was relatively easy, as there would usually be a landlord, or small brewery owner, with a ticket or two to spare. BGBW could also apply to CAMRA’s Publicity Office for tickets, and this is the method I used for several years. I would like to think that CAMRA benefited from my attendance, as I would always write a blog post about my visit, and I’m sure many other writers and publicists did the same. 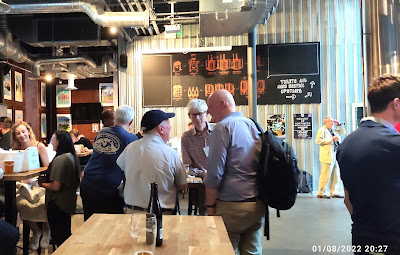 What I am getting at, in this round about fashion, is to say that the trade day at GBBF is a hugely important day for anyone with more than a passing interest in beer. The Guild’s Summer Party, the evening before, is therefore the perfect occasion for those planning to attend the festival, to discover more about the event, find out what to expect, and perhaps arrange places to meet up for a beer or two. As these people will be in town anyway, the pre-GBBF party makes perfect sense. Looking back, I discovered that I have attended four previous BGBW parties, starting with the 2015 event, and culminating in the 2019 bash, which was the final event, prior to lockdown. I missed the 2018 party, and the festival itself, as I was in the United States, attending the even more beery Beer Writers Conference, but a pattern does seem to have emerged with the Guild parties, in so much they are becoming larger, and better attended with each passing year. 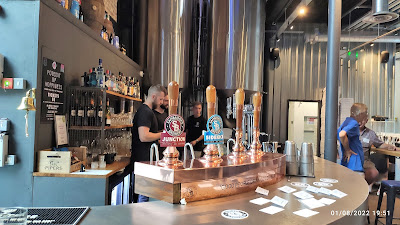 This year’s party continued the trend, and the chosen venue of the Sambrook’s Brewery, in Wandsworth, south-west London, was a most appropriate one.  Sambrook’s were founded in 2008 by Duncan Sambrook, and from humble beginnings in their original Battersea home, have gone on to become a major success story. Producing a thoughtful and well-regarded beers range of beers, covering much of the brewing spectrum. 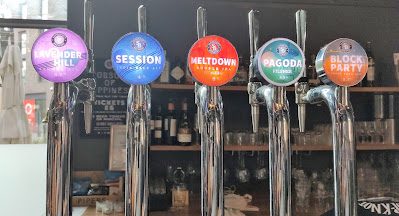 In 2020, Sambrook’s moved onto a new site, occupying part of the site of the old Young’s Ram Brewery, in Wandsworth, where they installed a state-of-the-art brewery, with its own tap room, housed in a spectacular grade II listed building in an area of the complex, known as the Ram Quarter. It was to here, that I made my way from Wandsworth Town station, last Monday evening, slightly delayed by a series of minor delays on the rail system. 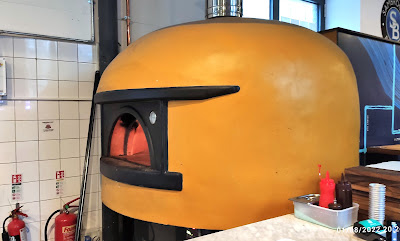 Sambrook’s Tap Room took a bit of finding, but only because I entered the Ram Quarter from the top end, instead of continuing further along Ram Street. I remember the old Ram Brewery, and its days under Young’s, and had even been on a couple of brewery tours. I was also familiar with the site from the outside, but before the area was redeveloped, it was hard to gauge just how large the site was. Seeing it laid bare, and in the latter stages of redevelopment, made me realise just how massive the site is, and how in terms of land value, it must have been worth an absolute fortune. 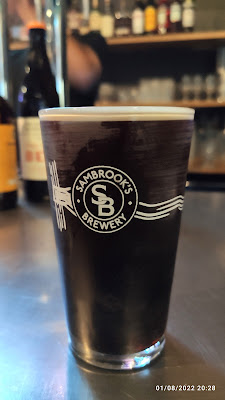 Much as it pains me to say so, it’s little wonder that following the retirement of their colourful chairman, John Young,  the company decided to sell the place off. Had they been a little savvier, the company could have built a new brewery on the site, whilst selling off the remainder, but perhaps the pound note signs in front of their eyes, proved too much! Still, Young’s loss is Sambrook’s gain, and the new company have demonstrated just what can be achieved with the right vision and the right investment.

The party was in full swing when I arrived, 30-40 minutes later than intended, and the same time interval since the event had officially opened. A number of the guests were sat at tables, situated on the outdoor patio area, but most were inside, crammed around the bar and seating area on the ground floor. I noticed a bank of hand-pumps offering some of Sambrook’s cask range, whilst further long the bar, an array of keg taps was offering a much more extensive series of beers.

I opted for the latter, having made the decision to stick with halves, in order to sample as many as was wise, given the fact I was due in at the following morning. I didn’t quite “complete the card,” as some of my drinking friends would say, but I did get to enjoy some excellent beers. Six halves, equating to three pints, was just the right amount, but I still arrived home later than intended, due to an incident, said to have occurred elsewhere on the rail network. That’s another story though, and one which doesn’t contribute anything to this narrative. 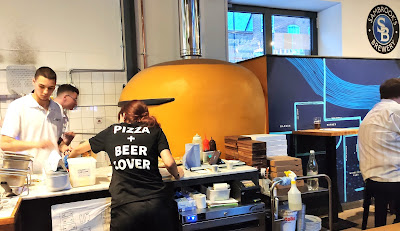 Having grabbed myself a beer, I discovered that pizza was being served in the upstairs function room. I had already noticed the wood-fired pizza oven, occupying the opposite corner of the downstairs bar, and the boxes of freshly baked pizza being transported upstairs, so I made my way up to the first floor, but not before first ordering another beer. The pizza was excellent and, for a while at least, seemed to just on, keep on coming. 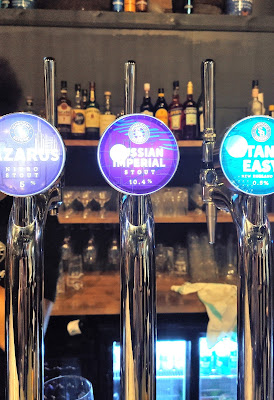 The beers too were first class and the stand out ones were Block Party – a mid-strength, American IPA, Meltdown – a slightly hazy, Double New England IPA, and Oatmeal Stout – a smooth, velvety dark stout. This beer was so new that it hadn’t yet listed on Untappd; an anomaly soon rectified by BryanB the Beer Viking. Sambrook’s Pagoda Pilsner was also good, as was the final beer of the evening, the 10.4% Russian Imperial Stout – spoiler alert, I only had a ⅓ pint of the latter!

From a social point of view, it was good to catch up with a few familiar faces, including the aforementioned BryanB and Rochdale & Oldham CAMRA legend, Tandleman, who was down for his usual stint working the foreign beer bar at GBBF, known as Biers sans Frontiers. There were quite a few other faces I recognised but, as Tandleman remarked to me, there were plenty of unfamiliar faces as well. We concluded that many must have been corporate members of the BGBW, important for the Guild to attract, and important for them too.

We both had a chat with one such person, but I won’t embarrassing him by revealing which brewery he currently works for. He was the individual I mentioned in my previous post about Greenwich, as he revealed what he thought were his reasons for the sad decline of Meantime Brewery – a company that seems to have lost its way in the corporate world of Asahi Brewing. I shall say no more, apart from observing that Meantime beers have become increasingly rare in both bars, and on supermarket shelves – although they still seem to contract brew for M&S. 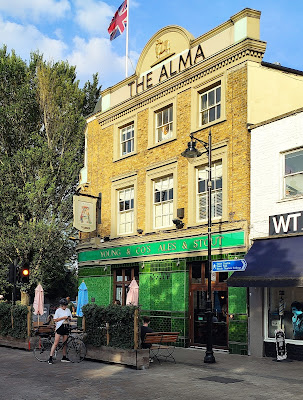 I left at around 9.15pm and took a slow saunter back to catch my train. Customers from the cafés and bars that overlook the pedestrianised road leading to the station, were sat out at pavement tables, enjoying some café culture. The Alma pub, directly opposite the station entrance, looked particularly attractive, with its original tiled frontage, although the photo shown here was taken when I arrived in Wandsworth, some three hours or so earlier.

It was an enjoyable evening, with some excellent beers and some equally fine pizza. The most important aspect though, was the chance to catch up with fellow Guild members, many of whom I hadn’t seen since the summer party, at London Fields Brewery, three years previously.

Always good to have a catch-up Paul