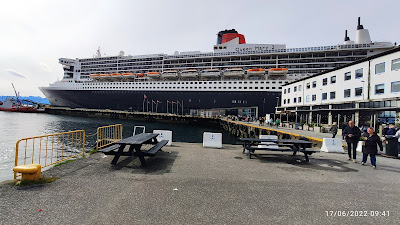 The first Friday of our recent cruise saw our ship, the Queen Mary 2 slipping into harbour, and docking at the port of Ǻlesund. This was my first visit to Norway, a country I had wanted to visit for a long time, but for some reason had never quite got round to it. This might have been due to Norway being right on the western edge of Europe, but that shouldn’t really have stopped me, given the availability of cheap flights. 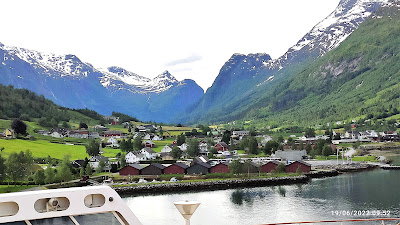 Instead I put the reasons down to the geography of a country which is long, thin and extends right up to beyond the Arctic Circle. A country that at its widest, is only 237 miles across, and at it narrowest is just 24 miles in breadth. The aforementioned geography plays a major role in the country’s makeup, with the western edge that looks out over the North Sea to the south, the Arctic Ocean to the north, and at its furthermost northern extremity, shares a border with Russia. 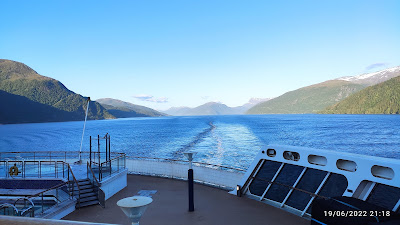 The bulk of Norway is mountainous, and the margin where these mountains meet the sea is characterised by a deeply indented coastline, with inlets, known the world over as fjords, that extend inland for a considerable number of miles. It was some of these spectacular fjords that our cruise ship was taking us to, alongside the opportunity of visiting a few of the ports and coastal communities along this western seaboard. 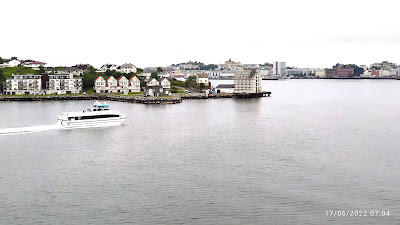 So early that morning we watched from the cabin balcony as our ship manoeuvred, with the aid of a tug boat, into Ǻlesund harbour. Then, after a quick breakfast in our room, we joined the queue of passengers eager to disembark the ship. The process was quick, easy, and unlike our previous port of call – Hamburg, there was no passport control to bother with. The only checks that were necessary was the requirement to tap out with our ship’s smart card ID system. 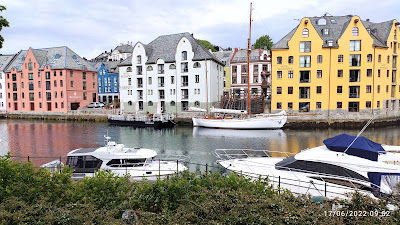 Basically, details of all onboard passengers form part of the ship’s manifest, and whilst I don’t know if this information was shared with the local Norwegian authorities, it would almost certainly have been available, should it be required. So, with a relatively seamless stepping ashore and there we both were, stepping onto Norwegian soil for the first time. 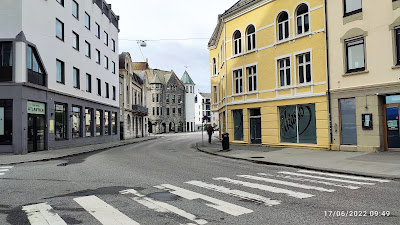 Ålesund is built on a row of islands extending out into the ocean, at the entrance to the Geirangerfjord but it is most famous for its art nouveau architecture. The latter is the result of a devastating fire that broke out on the night of 23rd January 1904. Fanned by a strong wind, the fire spread rapidly through the mainly wooden buildings of the town, making most of the 10,000 inhabitants homeless. 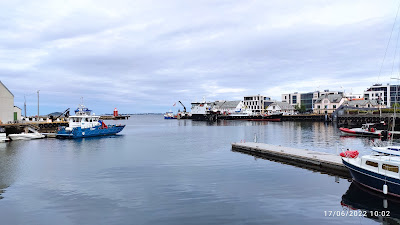 Assistance came from an unusual source, namely Kaiser Wilhelm of Germany. The Kaiser knew the town well, as a result of his annual cruises around the area, and after the fire, sent four warships with materials to build temporary shelters and a barracks.. After a period of planning, the town was rebuilt in stone, brick, and mortar in Jugendstil (Art Nouveau), the architectural style of the time. To honour Wilhelm, one of Ålesund‘s most frequented streets was named after him, proving that even the Kaiser wasn’t all bad. 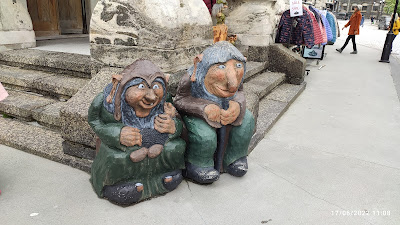 The quay where our ship berthed was right in the heart of the town, which meant the centre was easily accessible on foot. We had no set plan, apart from just wandering about and enjoying the ambience of this bustling port town. The weather wasn’t brilliant, in fact it was overcast and quite chilly, but at least the rain held off. The town itself was easy to navigate around, its footprint being determined by the shape of the indented and rather rocky coastline.

We did a spot of shopping, before 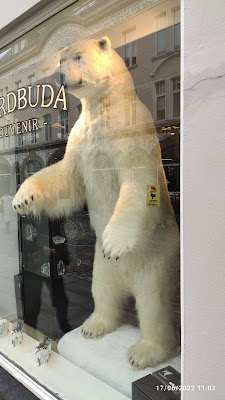 wandering back towards the quayside, disappointed that the craft beer bar overlooking the sound, didn’t open until 3pm, which was two hours after our departure! Talk about a missed opportunity, remaining closed when a couple of thousand cruise passengers turn up on your doorstep!

It’s worth mentioning here that at every shore destination a range of different tour excursions and activities are available. Mrs PBT’s and I have always been independent-minded travellers who prefer to do our own thing, and it should also be noted that these excursions need to be pre-booked and don’t come cheap.

That said, I did book an excursion for the final shore day of the cruise, which was the return stop-over in Hamburg. This was is a walking tour of the medieval city of Lȕneburg, which lies to the south of Hamburg. There will be about this excursion, in a later post 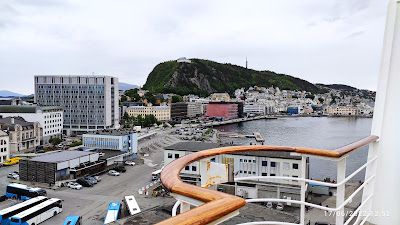 Ålesund, was our most northerly destination, a fact demonstrated by the sun not setting until 11.30pm. This seemed really strange, as it never became properly dark that evening. Prior to departing, we were given a New York-style send-off, with a fire boat moored nearby, spraying plumes of water, high into the air, as we left the town.

We steamed steadily southwards, through the night, towards our next port of call, which was an unscheduled stop, and a hastily arranged one that arose due to a change in circumstances that prevented from us from berthing at our original destination of the small settlement of Flam. I'm still not entirely sure what the reasons were, although I believe that the environmental impact of a cruise liner docking in a small, narrow fjord, had something to do with the decision.

It's not just micros and craft beer bars in England that stay shut when the custom is there then !

No Martin, you are not alone!!