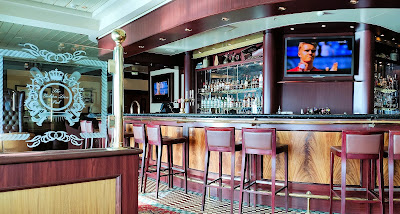 I mentioned briefly, in an earlier post, and also referred to the fact in a several subsequent comments, that there was a pub on board Queen Mary 2. Admittedly not the most traditional of public houses, but an area on the starboard side of Deck 2, was set aside, and kitted out as a typical English urban pub. 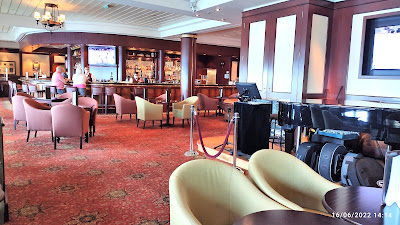 There was a bar at one end, which customers could sit, and drink at if they wished, and leading off towards the bow, were a number of alcoves, furnished with comfortable, leather-type, bench seating, and each with its own table. 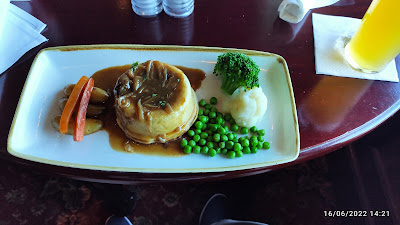 Named the Golden Lion, and complete with its own hanging sign, the pub was a popular part of the ship, providing not just a place where passengers could sit and relax, whilst enjoying a drink, but also somewhere they could be entertained at. This included, live music, from a variety of different acts, and representing several genres, the Golden Lion also hosted quizzes, and bingo sessions. Televised sports were shown, from time to time, with football obviously proving popular, with the large number of both Brits and Germans, on board.

One afternoon, on a rather overcast “sea day,” Mrs PBT’s and I inadvertently got caught up in a game of the latter, but not wishing to disturb the seriousness of the session, ended up staying as observers. We didn’t go thirsty, as we made sure that we caught the waiter’s eye, in order for him to recharge our glasses. 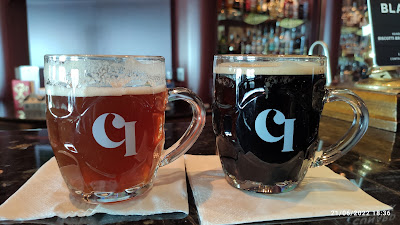 We’d originally called in at the Golden Lion for lunch, in order to sample the typical pub fayre menu, which included classics such as cod & chips, beef burgers, ploughman’s, plus a "pie special" that changed daily. The food is included in the fare, although drinks, both soft and alcoholic incur an additional charge. Alongside a number of international beer brands, three signature beers, specially brewed for Cunard by Salisbury-based, Dark Revolution Brewery, are available. 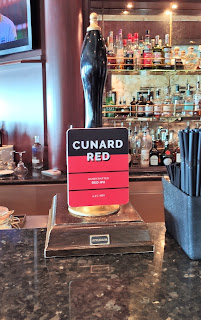 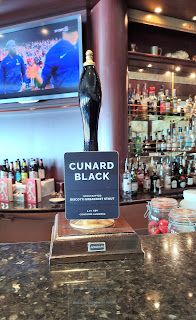 they are respectively, as their names suggest a Pilsner-style lager, a Red IPA, plus a superb dark beer, billed as a “Breakfast, biscotti-stout.” The later contains oatmeal, coffee, and vanilla, and at 5.7% abv, isn’t really the sort of beer you’d want to consume at the breakfast table, although when you are on holiday, who knows?

The Cunard beers are sold in canned form at some of Queen Mary 2’s other bars, but in the Golden Lion are available on draught. Regardless of their packaging and presentation, the beers are unfiltered and unpasteurised, so in effect are cask-conditioned, and as if to add to this uniquely British touch, the Red and the Black varieties are dispensed by genuine hand-pumps. 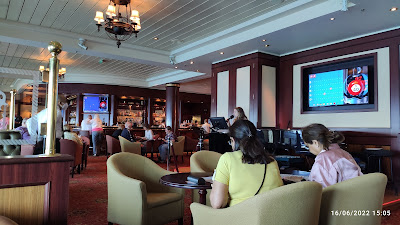 I know these pumps are genuine, as I popped down one afternoon – purely for research purposes, and sat at the bar, so I could witness my pint being pulled – and yes, muscle power was definitely involved! The beers were reasonably priced too, particularly in view of the surroundings. My pint of Breakfast Stout, cost me $7.10, equivalent to £5.90 at today’s exchange rate, and before you question the currency, everything aboard all of Cunard’s cruise ships, is priced in US dollars probably because of the large volume of transatlantic passengers they cater for. 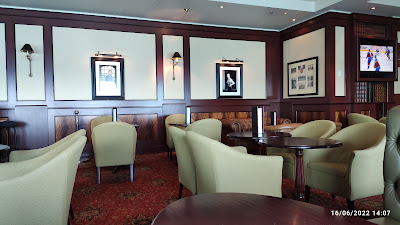 To sum up, the Golden Lion was a nice place for a relaxing drink, and given its situation on Deck 2 being that much closer to the water than the accommodation and dining decks, you could sit there watching the waves, as the ship effortlessly glided it was through the seas. Service was largely by waiter, although as mentioned above, you could sit, or even stand at the bar and order, if you so desired.

Finally, the Golden Lion pub, is obviously popular with passengers as the name, plus the concept, extends across all three of Cunard’s current cruise ships, and may even feature on their latest vessel, the Queen Anne, which makes her maiden voyage in 18 months’ time.

Hi Steve B, I suppose it depends on the strength, and the providence of a craft beer, but to be charging $8.00, 9.00 for a measure that isn't even a pint, seems a bit steep to me.

The only distinction between Roman and Arabic numerals is the way they are written, and the fact that the latter is a far simpler system.

I imagine there is a protocol for numbering ships, that have the same name. Queen Mary 2's predecessor was the Queen Elizabeth 2, universally abbreviated to QE2. The Queen Mary doesn't seem to have been abbreviated in quite the same way.

Sorry, the introduction should have read Steve D!

£5.90 for a 5.7% stout seems a bargain for a cruise, as beer on board our past cruises was more than that a decade ago.

I thought so, Martin, and it's good to see us beer drinkers being properly catered for, rather than playing second fiddle to the wine buffs.

"kitted out as a typical English urban pub"
Was there a weekly Meat Raffle ?

I worked as a crew member on P&O's SS Canberra, launched in 1960 and complete with the Cricketers Tavern, a willow panelled bar/pub with red leather buttoned upholstery and wall to wall cricket memorabilia on the walls. I'm sure I've read that the original idea was to install a genuine pub interior from somewhere grand and soon to be demolished circa late 1950's

Stafford Paul - a weekly meat raffle? Now you're talking, do any of the pubs, close to where you live, still hold such things?

They were quite commonplace in Tonbridge, back in the 1980's.

Chas, I remember the Canberra, and thought she was a very attractive, and modern-looking ship, although I never saw her in real life. Interesting to learn that she had an onboard pub, as well.

Re-using the old fittings, from a pub facing demolition, sounds a good idea, and would help add a touch of realism to the ship's pub.