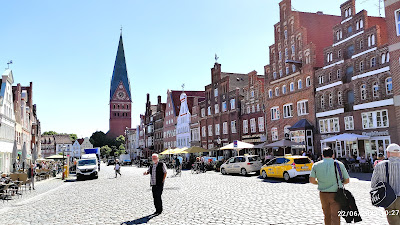 One feature of any cruise is the shore excursions offered at most ports of call. There are often several options to choose from at each destination, offering something to suit most tastes and interests. The cruise that Mrs PBT’s and I went on certainly offered a variety of different options to choose from, and just before the final leg of the journey back to Southampton, I succumbed to temptation and booked myself on an excursion to the medieval town of Lüneburg, also known as Lunenburg in English. 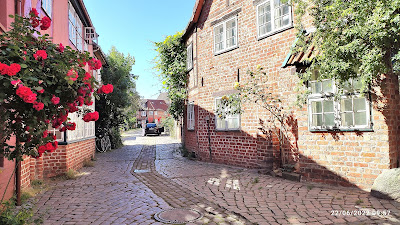 Our cruise ship had docked at Hamburg, for the second time on the voyage. This was to drop off the large contingent of German passengers who had boarded on the outward journey to the Norwegian fjords. We later discovered that the Queen Mary 2 had taken on another large group from Deutschland, most of whom would be sailing on to New York, after dropping the majority of us Brits off at Southampton. 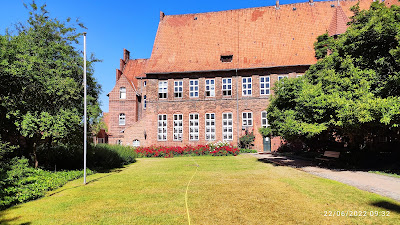 We had given the excursion options a miss on the initial visit to Hamburg, primarily because we wanted to experience the city for ourselves, at close hand, but seeing there were additional options available on the second visit, I decided to bite the bullet and book myself a place on one of them. I said I, rather than “we,” because Mrs PBT’s is rather slow on her feet these days, particularly when it comes to keeping up with a guide or getting on and off coaches. She also isn’t that interested in medieval architecture or historical places, which effectively ruled Lüneburg out as far as she was concerned. 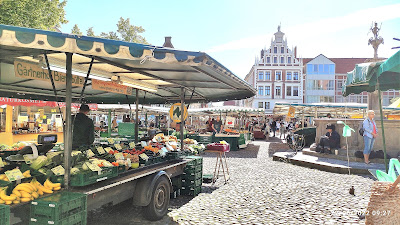 So, on the allotted day I had an early breakfast and assembled with the rest of the excursion party, in the ship’s Royal Court Theatre, for the pre-tour briefing. After that, we trouped off the ship, through passport control and boarded a comfortable, luxury, double-deck coach, that would take us to Lüneburg, which is about 40 minutes’ drive, to the south of Hamburg. 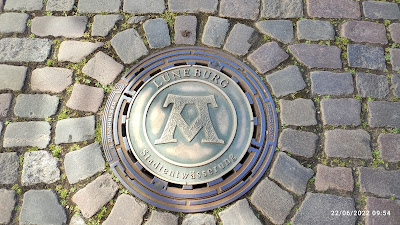 The traffic was very heavy that morning, but fortunately most of it was heading into the city, rather than out of it, and before long we had left the hustle and bustle of the port behind us having reached the countryside of Lüneburg Heath or Heide, as it is known in German. Our tour guide, who was a friendly local historian of mixed German-Danish descent, provided the commentary and during the short journey described much of the recent history surrounding the region. 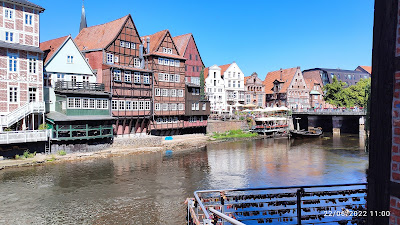 Of particular local significance, was the surrender on 4th May 1945, of German forces in western Europe to Field Marshall Montgomery, on Lüneburg Heath. A few years later, the occupying British administration was responsible for setting up of the state of Niedersachsen (Lower Saxony), in an area that was formerly part of Prussia. Without a shred of irony, he went on to say that Georg Ludwig, the ruler of the Duchy and Electorate of Brunswick-Lüneburg, became King George I of Great Britain and Ireland on 1st August 1714, and thus became the first British monarch of the House of Hanover. 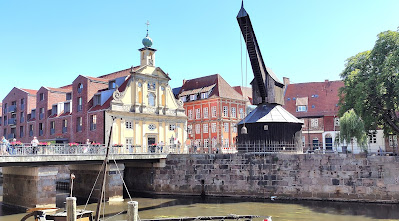 Moving swiftly on, the town of Lüneburg dates back more than 1,000 years and is justifiably considered one of the prettiest towns in northern Germany. Lüneburg's eventful history led it to become one of the most important places in the Hanseatic League through, its salt production, although the mining of this precious commodity eventually had a deleterious effect on the structure of the town, as we will see later. 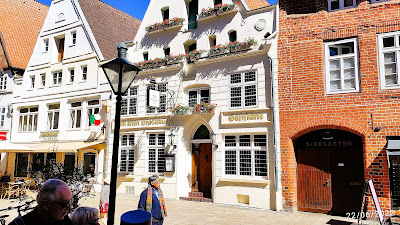 Having survived World War II virtually unscathed, Lüneburg has retained its charm and unspoilt medieval character. The establishment of a university, post-war, has given the town a real youthful flair, and a walk along the narrow-cobbled streets, amongst the old gabled buildings, adds to the overall appeal of Lüneburg. We witnessed the town’s charm for ourselves, as we reached the large central square, where the fruit and vegetable market was in full swing, and it was here that we disembarked from the coach and joined our guide on a walking tour of this attractive and lively town, 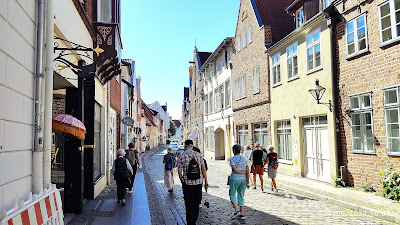 In common with many towns in this region of northern Germany, most of Lüneburg's buildings are constructed from red bricks; a fact we couldn’t really miss as our guide led us through the towns’ winding streets. I mentioned the salt trade earlier, and a result of the increasing quantities of salt being mined, was the ground beginning to sink by up to several metres, in certain parts of the town, notably the so-called Senkungsgebiet or "subsidence area". 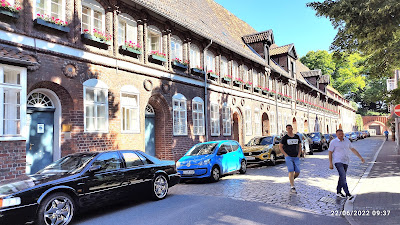 This became an increasing problem after 1830, when improved technical equipment led to even more extraction, resulting in houses and even one of the local churches, in losing their stability and having to be demolished. Because of this subsidence, and because salt mining was increasingly unprofitable, the salt-works finally closed in 1980 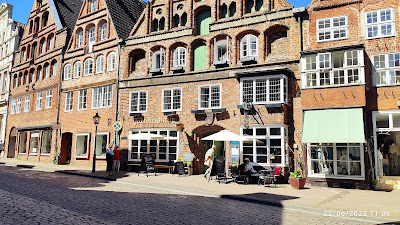 We had a couple of hours in the town, which was fine for the tour, but it didn’t leave much in the way of time for beer drinking. This was a shame, as not only did I identify a nice-looking pub, but it was also a rather hot day, and after walking the streets of Lȕneburg, I had developed a king-sized thirst. I asked the tour guide about local beer, and he said there was a brand called Lüneburg Pilsner, which he suspected was owned by Holsten Brewery of Hamburg. Subsequent research reveals this was indeed the case, and despite beers such as Lüneburger Kronen-Pilsener and Moravia Pilsener being well known in North Germany, production of them had been moved to Holsten. 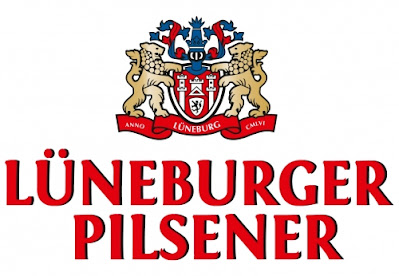 Apart from the time factor, there were two other issues that prevented me from calling in for a swift beer, the first being the well-known problem associated with German pubs and bars. This is the age-old problem of waiting for the waiter to bring your bill, when you now you have a bus to catch. The other was the inevitable effect that even just one pint of beer has on one’s bladder, and as the second part of the excursion included a coach tour of Hamburg city centre, it would be some time before being able to empty it. 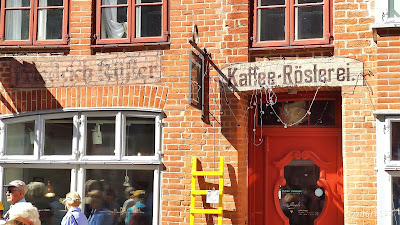 There was a toilet on board the coach, but from past experience I know such places are cramped and akin to those found on an aircraft. Coupled with the movement of the coach, then unless one’s aim is good, there’s a good chance some will end up on the floor. This brings back memories of a return coach trip I made, almost 40 years ago to what was then Czechoslovakia, 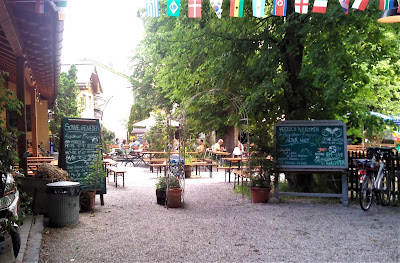 Common sense prevailed, and apart from the rather nice “coffee to go,” purchased in the market, and consumed whilst waiting the arrival of the coach, I ended up going thirsty. The drive-by tour of Hamburg was worthwhile though, as it filled in quite a few gaps in my knowledge of the city. The coach returned us to the cruise terminal, where I was somewhat surprised by the number of new passengers waiting to board. 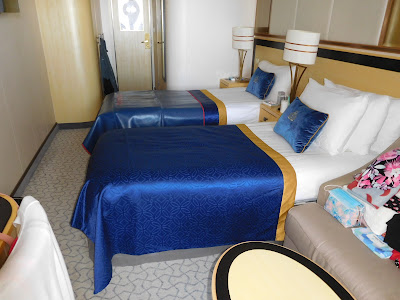 I was back on the Queen Mary 2 in time to join Eileen for a spot of lunch. She said how nice and quiet the ship had been that morning, not knowing there were several hundred German passengers queuing up to board down in the terminal – a fact that our tour guide had teased us about, as we disembarked for the coach. All joking aside, he said that the Queen Mary 2 was held in particular affection by the people of Hamburg, and they had lined the quayside and banks of the Elbe river, in their thousands when the ship made her maiden voyage to the city.

One final point is I kept getting Lȕneburg muddled up with the much larger city of Lȕbeck, another historic Hanseatic city, and one there was an excursion to on our outward stop-over in Hamburg. Lȕbeck though, is renowned for its marzipan, rather than its salt, but as I have never been a fan of the former, I wasn’t too concerned about missing it. The local Brauberger zu Lȕbeck would have been worth trying, though!