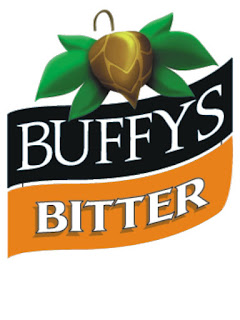 I picked up a copy of the most recent “London Drinker” CAMRA magazine, whilst at GBBF last week. There’s always plenty of interest amongst it pages, and not all the article are about London.

A particularly sad piece of news from the wilds of Norfolk, caught my eye. It concerned the closure of Buffy’s Brewery, who are throwing in the towel after 25 years of trading. The brewery was based in the village of Tivetshall St Mary, and was founded in 1993. Buffy's beers could be found in several pubs across Norfolk as well as at their own pub, the Cherry Tree at Wicklewood, near Wymondham, which they will continue to run.

The closure was blamed on there being too many breweries in Norfolk, and with over 40 of them all competing for a slice of a diminishing market, something had to give. Like many industry observers, I was more than a little surprised to learn that Buffy’s had gone to the wall, but Roger Abrahams, who founded the brewery, along with Julia Savory, claimed that the micro-brewing sector was close to saturation point, and that competition between brewers “had become very aggressive.” 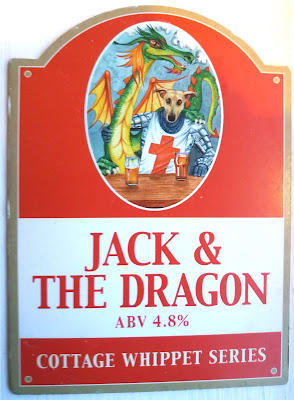 Mr Abrahams alluded to those pubs who wanted something different every time, and this reminded me of the so-called “badge brewers.” I wrote a lengthy article about this phenomenon, back in 2012. For the uninitiated  "badge brewing" is when a brewery churns out a plethora of different beers, often with silly names which, whilst purporting to be different brews, are just a variation on a handful of basic recipes.

By doing this they are catering primarily for the "tickers" market, and are duping those drinkers foolish enough to believe they are getting something new and different each time. What they are doing of course, is not illegal but at the same time it does push the boundaries with regard to what constitutes a new, different beer, and what doesn’t.

Two companies, in particular were infamous for this practice Cottage Brewing and Archers Ales, both of whom are no longer brewing. The two companies between then produced a staggering amount of supposedly different, “one-off” beers, based around a number of different themes. 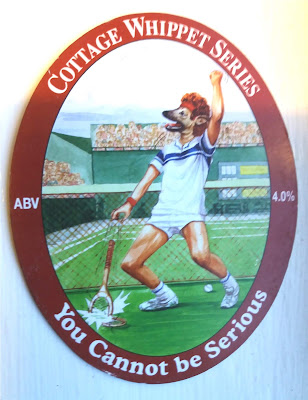 Cottage Brewing majored on their “Whippet” series, named after the owners’ dog, whilst Archer’s produced a range of beers with a “locomotive” theme. The connection, in the latter case, was that Archer’s were based in part of the former Great Western Railway locomotive works in Swindon.

Buffy’s, by way of contrast, concentrated on a core range of traditional-style beers, primarily bitter in flavour and mainly brown in colour. This may have been their downfall, especially within an increasingly fickle licensed trade, which expects something new, or different every time.

However, as the examples of both Cottage and Archer’s illustrate, chasing after this “fickle” trade is wrought with its own problems; especially in a market which is already over saturated and over-competitive.
Posted by Paul Bailey at 20:21

"Fickle" is the word, with pubs encouraged (read CAMRA magazines) to rotate guest beers and put ever more on.

Breweries get no regular accounts, pub regulars forget what they like, and competition reduces barrel prices ever further to keep those pints at £3 and below.

The other salutary tale this year was from Newcastle where we lost tge excellent Mordue brewery. They'd largely stuck to the knitting, bar the odd seasonal for the Spoons fest, but you rarely saw the award winning Workie Ticket anywhere as it wasn't new. Just great.

Your comments Martin, nail the problem of the dog-eat-dog world that is increasingly the case in the pub trade today. With few, or even no regular accounts, breweries spend an inordinate amount of their time constantly chasing new ones, and feel obliged to offer cut-price incentives, just to get their beer on the bar.

The point about regulars forgetting what beers they like, is especially true and is often overlooked, particularly by CAMRA, who often seem to put choice above quality. Apart from visiting “beer tickers,” I suspect many pub regulars play it safe by sticking to something they know and feel safe with.

The sad demise of Mordue, proves that even brewers of award-winning beers are not immune to the effects of the constant quest for the new, or the different. It’s the old adage of too much choice, often meaning less.

Really an interesting article. I hadn't thought of breweries tweaking beers and rebadging them. Kind of amazing to me, but I can see that it would work.

There's sometimes not even any tweaking Dave, just rebadging.

Incidentally, Paul, I'm still having this problem with Safari taking forever to load your pages on my laptop, so I haven't been as regular a visitor to your blog as I would like of late.

I've researched and there are various explanations and solutions out there, all written by computing fanatics, which are beyond me so far.

Like you, I've searched for an explanation on the net, that a non-computing geek can understand, but so far to no avail. There's probably a reason for keeping making what should be a simple process, as complicated as possible, but I don't know what it might be.

That's a shame. Always found Buffys to be a good pint but only ever came across it at small beer festivals rather than pubs. Increasingly in Norfolk many pubs will have Adnams bitter, Wooodfordes Wherry, GK IPA or Doom Bar (often 2 or 3 of these at the same time), or the better pubs will tend to stock local breweries that have a bit more gloss on the marketing front; Grain, Norfolk Brewhouse, Lacons.

Hi Lorraine, the beers you list pretty much match my experiences of Norfolk pubs, and I certainly agree about Grain, Lacons plus one or two others, being stocked by the more adventurous ones.

The question is, where do the 30 or so other Norfolk brewers find outlets for their beers?

Nail well and truly hit on the head, I had forgot about Cottage (perhaps dismissing it as a bad dream). The challenges mentioned are one reason reason why taprooms are increasingly a vital part of a brewery's (commercial) offering.
John Cryne, Secretary London Brewers' Alliance.

Taproom are a vital part of a growing brewery, though perhaps they work best when they're part of a circuit (Manchester or Bermondsey) rather than in an isolated Norfolk industrial estate.

I guess you'd also question whether there'd ever be enough economies of scale from a taproom, the odd beer festival and a rotating guest list in the half dozen or so beer exhibitions.

Yes, I agree - even in big cities, some taprooms are seen as harder to get to and may not be economic. On the second point, I have been talking to one brewer who has scaled back their operations such that 90% to 95% of their production is through their taproom. The balance to CAMRA festivals and trusted pubs. One of the benefits - the time saved in chasing unpaid invoices.
John Cryne, Secretary London Brewers' Alliance.

Taprooms certainly seem the way forward, especially in urban areas. I visited several breweries during last year’s visit to the United States; all had taprooms that were doing a roaring trade.

Even the establishment in rural Virginia, was busy. Apart from people calling in to fill up their “growlers,” much of the trade seemed very much family-oriented, and this was reflected in the facilities offered.