One of the best, and certainly one of the most looked forward to beers I sampled at the recent European Beer Bloggers Conference in Amsterdam, was Pilsner Urquell. Dispensed from one of the brewery’s specially designed, mobile bar and Tankovna set-ups; complete with an integral tank containing  lots of lovely  unpasteurised Pilsner Urquell, the prospect of a few chilled glasses was something definitely worth waiting for. The fact is there are only so many over-hopped Double IPA’s, Imperial Russian Stouts or barrel-aged sour beers one can sample, before ones palate becomes jaded and a longing develops for something clean tasting, and much more refreshing.

Oddly enough, I felt the same, the previous year, at the EBBC in Brussels, when after various Lambics, Saisons, strong Trappist Ales and Sour beers I was almost gagging for a pint of something more “normal”, and something more refreshing.

This got me thinking that much of this beer geek stuff has lost sight of what beer is all about. Sure I enjoy sampling some of these extreme beers, but by their very nature they are not every day quaffing beers; and they are certainly not session beers. Beer is essentially a long drink best enjoyed in the company of friends or like minded individuals, and whilst beers at the cutting edge of what’s possible in a brewery obviously have their place, the pursuit of something different, just for the sake of it, is a road which will eventually lead nowhere.

Like the Emperor’s New Clothes, devotees of the new, the novel and the downright bizarre, will eventually get tired and move onto the next “in thing”. We have already seen this at the extreme end of the craft beer movement, where these acolytes have graduated onto artisan gin, as being the next trend to follow, and the next drink to be seen drinking.

It is a pity really because there are some really interesting beers being brewed, with brewers really pushing the boundaries as far as established styles are concerned. Breweries such as De Molen, which I visited recently, and wrote about here, are a case in point.

The trouble is that for every innovative brewery like De Molen, which 9 times out of 10 gets it right, there are an awful lot of breweries who don’t! I get the feeling that some just experiment for the sake of it; fair enough if you’re not attempting to foist your undrinkable, grossly un-balanced mishmash of a brew on the unsuspecting public. However, if you are nothing more than a crowd-pleaser, turning out the latest “in thing” in the beer world, just to make a fast buck, without having done your homework properly, then you are doing the world of beer and brewing a grave disservice.


Unfortunately, even if you are turning out amazing beers, unless you can shift your market focus away from these fickle followers of trends; fair-weather friends, who have no real appreciation of what your beers are about, and who are only looking for the next “awesome” beer style, then much of your effort and innovation will be wasted.

I admit it will be a hard task trying to convince the average pub drinker to slip that far out of his or her comfort zone, but a steady trickle down may in the end have some effect. After all, who would have thought we’d see drinkers enjoying a glass of cloudy wheat beer, of a strong Abbey-style beer; even if it is Leffe. Going back even further, who would have predicted the rise and general dominance of that most Germanic drink – lager; especially just a couple of decades after the end of the Second World War? 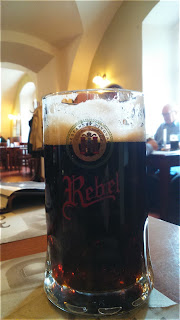 Lager is obviously now well-established as a mainstream beer in the UK, and some native styles such as mild ale, are in terminal decline, but there is still a huge world of difference between the beers the vast majority of pub goers, and home consumers drink, and the much more “extreme” beers enjoyed in specialist beer bars, or purchased through online suppliers.

For me the ideal strength for a beer is between 4 and 5% ABV. Stronger than this and the beer can be cloying, and even too sweet; but equally a beer much below 3% will be thin and lacking in body. This is why those glasses of Pilsner Urquell were so appealing, and this is why it is so enjoyable to sit in a local pub and quaff a few pints of one of the best beers available in this part of England; namely Harvey’s Sussex Best.


There really are few things finer in life than the appreciation and enjoyment of good beer; especially when it takes place in an unspoilt country pub, here in the UK, or under the shade of the chestnut trees in a sunlit Biergarten in Bavaria. Some of Belgium’s classic beers too are best enjoyed in a quiet, atmospheric café, tucked away down a side alley in one of the country’s historic towns, and knocking back a few mugs of hoppy Pilsner, in a bustling Prague pub, takes a lot of beating.

In effect, what I am trying to say is there’s a beer for every occasion and for every location. In other words, as the advertising campaign tells us, “There’s a Beer for That!” What we shouldn’t’ lose sight of is that beer is a drink to be enjoyed, rather than be dissected and analysed (or should that be analised?), to the nth degree. Somewhere along the way there are people who have lost sight of this, and completely forgotten (that’s if they even knew in the first place), what beer is all about.
Posted by Paul Bailey at 23:27

Beer should be seen as a social lubricant, not just something to be "appreciated" in a narrow, joyless way.

It's a sobering thought, and I try not to have too many of those, that most beer drunk in this country is either a bastardised version of continental lager or smoothflow. Being a real ale drinker is a minority activity in itself, and the lovers of the extreme beers you refer to are a much smaller group again.

I agree with you entirely that beer drinking is primarily a part of social activities, rather than an end in itself. This applies to real ale drinkers as much as any others, shown by the fact that at beer festivals, most people, while they sip their pints, are happily chatting away to their friends or to people they've met at the bar.

The problem with constantly seeking out the latest great thing is that it soon stops being the latest, a phenomenon profitably exploited by mobile phone manufacturers year after year, making people despise what they thought wonderful a year earlier. The same with beer: if lots of people start drinking what you were raving about 6 months ago, then your tastes are no longer innovative: you're in danger of becoming mainstream. It's a sort of arms race of beer exclusivity.

There's absolutely nothing wrong with trying and liking any kind of beer that's available. It is wrong to regard your tastes in beer as somehow marking you as superior to other beer drinkers, and it's not just craft beer devotees who might do this: there are plenty of real ale drinkers who look in contempt at other people's choice of drinks. I came across a couple of them at the Liverpool CAMRA Revitalisation event recently; one even said he couldn't care less if non-real ale pubs closed, which is an entirely selfish attitude: no matter that the pub might still be a hub for its community, to him it would be worthless.

A local band I know was playing in a pub in Bootle earlier this year, and I went along. There was no real ale, but in every other respect it was a great local: it was busy with a nice atmosphere, a very mixed age range and a varied group of customers. Our CAMRA zealot would happily see it closed: in my opinion, he entirely misses the point.

I think there's a large measure of agreement on this amongst us, er, more mature drinkers :-)

Hardly any point writing, so strongly do I agree with Mudge and Nev. Nev's point about some folk's attitude toward non-real pubs is especially well made (and one Mudge has made many times in the past. Those pubs in Bootle, or Netherton or Walton, are as important as all of central Liverpool's gems to the people who use them. Pubs aren't primarily about alcohol, let alone real ale.

Train enthusiast enjoy the trains not the travel.

Car enthusiasts enjoy the cars not the drive.

Stamp collectors enjoy the stamps not the letters.

As for beer enthusiasts? I'll let you decide.

Plenty of craft beer is extremely sessionable. Its not a case of either-or.

Unfortunately organisations dedicated to a single issue; or even loose groups of people, united by a shared interest, tend to attract a lunatic minority on the fringes. The minority tend to be much more vociferous than the majority (just to get their point across), and often this is out of all proportion to their numbers within the organisation, or group.

I hate to divide cask ale drinkers and craft beer aficionados into separate groups, but a sizeable minority in both camps seem determined to dismiss the other out of hand, and to denigrate the beers enjoyed by their opposite number. Craft-drinkers might dismiss “real ale” as boring, brown bitter, only suitable for old men; whilst cask lovers are equally dismissive of what they see as overly citrus-flavoured, “hop bombs”.

Within the real ale fraternity, we have the “Ticker Brigade”; only interested in trying beers still to be crossed off their dog-eared lists, and then only in small quantities. Equally, the craft-beer scene attracts the chic-urbane, hipster element, forever searching for that elusive just-launched, crowd-funded, revivalist, experimental beer, before moving onto whatever happens to be the next extreme beer fad.

Both groups may despise each other, without realising they are equally obsessive and OTT as each other. Both represent minorities within larger minority groups, totally divorced from what most beer drinkers and most pub goers enjoy.

Rather than squabble with each other, and trading on-line insults on social media, the sensible majority of real ale drinkers need to get together with the sensible majority of craft devotees, because ultimately both groups share a common interest, which is to raise standards within the brewing industry and promote the spread of quality beers which can be enjoyed and appreciated by all drinkers.

Well said Paul, but common sense like that will get you nowhere !