Like beer lovers the world over, I was aware of the legendary Dutch brewery, De Molen, but I had never tried their beers. This was primarily because I never saw them on sale, anywhere in the UK, although I suspect had I visited a specialist bottle shop, or tried an on-line retailer, then things would have been different.

I first heard of De Molen back in 2013, when visiting the Kent Green Hop Beer Festival in Canterbury. This was because there was a note in the beer tent, explaining the absence of legendary Ramsgate brewer, Eddie Gadd from the festival, as he was over in the Netherlands, attending the annual Borefts Beer Festival. The festival is hosted by De Molen in their home town of Bodegraven, which lies to the south-west of Amsterdam.

That at least registered De Molen on my radar, so earlier this year, when I saw an excursion to Bodegraven for a visit to the De Molen Brewery, advertised as the post-European Beer Bloggers Conference excursion, I jumped at the chance and booked my place.

The trip took place on the Sunday, which was the day after the conference ended, and involved making a journey by train from Amsterdam, to this small Dutch town. It had been pouring down with rain for most of the morning, but thankfully eased off a bit as we arrived at Bodegraven.

Our party of 19 made the short walk from the station to the outskirts of the town where we could clearly see the imposing windmill which gives the brewery its name (De Molen literally means “the mill” in Dutch). The windmill, which dates back to 1697, is called De Arkduif, and whilst it now houses the brewery’s taproom, restaurant and shop, it was the original home of  the brewery when it was started by Menno Olivier, back in 2004.
We were met at the windmill by our guide. I never did catch his name, which was a shame as he was very knowledgeable and a good spokesman for the brewery He was also an excellent host, as we were to discover after our guide had shown us around the brewery and told us some of the history of De Molen and its eclectic range of beers.

We started of at De Arkduif, where we saw the original brewing kit. I must admit it looked very Heath-Robinson, with a strange double copper arrangement. The whole thing was encased in brick, which gave it a real rustic look. I wasn’t making notes, but I did manage to keep track of the beers we sampled. These were Kaapse Karel – a 4.8% pale ale; Hammer & Sikkel – a 5.8% porter and Vuur & Vlam (Fire & Flame) – a 6.2% IPA.

We had a few more beers when we returned to the windmill-restaurant after the main brewery tour, but it is well worth me spending time describing the impressive set-up De Molen have now, which is in total contrast to the tiny home-made kit they started off with.

The brewery is housed in a number of inter-linked industrial units on a small estate within shouting distance if the brewery. I’m not sure of the size of the plant or the brew length, but the brewing equipment occupied virtually the whole of the first unit. We didn’t realise it at first, but there were three more units to come. One was home to a newly installed hi-tech bottling plant, whilst the last unit, which was still being worked on, had rack after rack of large wooden casks, which are used for De Molen’s barrel-aged beers. There were whisky casks, as well as wine barrels, and there were masses of them. There was also a bar and kitchen area, still under construction.

In between the second and fourth unit was the brewery’s raw material and packaging store. With umpteen bulk bags of malt, stored in the cool and dark warehouse, alongside a staggering number of bottles (both empty and full), plus the largest number of key-kegs I have ever seen, there was some serious money tied up here in ingredients and packaging items alone! (Some of the financial backing has come from Bavaria Holland - see Brouwerij de Molen's statement about this).

After the tour, we had to leg it back quick to the windmill in order to avoid a sharp shower, but once inside we were ushered over to three reserved tables, and treated to an excellent lunch of homemade tomato soup, followed by a selection of locally cured cold meats and cheeses, with some nice thick chunks of artisan bread. As a special treat, a big steaming hot bowl of freshly cooked mussels was placed on each table.

We were given a glass of Tsarina Esra Imperial Porter 10.1% to go with our lunch, then after that we were on our own. The food was excellent, as was the beer, but after all the heavy stuff I decided I wanted something lighter. One of the guest beers on the restaurant’s list fitted the bill in the form of Gänstaller Zoigl 5.8%. This fine refreshing, roughly filtered beer is brewed by Gänstaller Bräu of Hallerndorf in Franconia, Germany.

Sometimes a nice, palate-cleansing beer is all you want after a succession of “full-on, in-your face” beers, so I make no apologies to De Molen to not sticking with their beers with my lunch. I did, however finish up sharing part of a bottle of barrel-aged Rasputin 11.2%, with a fellow blogger.

After lunch, most of us drifted off; some by car and some heading direct to the airport. The rest of us walked back to the station for the journey back to Amsterdam. It was sad to be saying goodbye, especially as this was the last European Beer Bloggers Conference in its present form. I won’t say anything further at this stage, although I will be revealing all fairly soon, in a separate post. 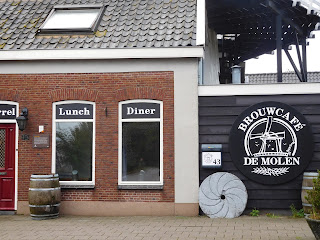 As far as the trip to De Molen went, it was a most enjoyable and educational experience, which gave a fascinating insight into this most esoteric of new wave breweries. I am extremely glad I booked my place on the trip and will now keep an eye out for the company’s beers.

Disclaimer: For those concerned about such things, we all paid for this brewery tour with lunch; as well as for the beers we drank with our meal. We also paid for our return rail travel to Bodegraven.

I've enjoyed your reports of the trip Paul and garnered sufficient inspiration and knowledge from it to plan my next Amsterdam trip.
To me piss-ups like this are more about the journey and the people and experiences you come across than beer-ticking effusiveness about the hoppinness of this or that drink.
You know who the usual suspects are ....

Glad you enjoyed my reports Stanley. I think as we grow older, we begin to appreciate the journey and the people we meet along the way, much more. This is almost certainly why beer festivals now have far less appeal than they did when I was younger.

My next trip takes place at the end of the month. It is to Regensburg, on the Danube, in the far east of Bavaria. My wife’s coming along on this one though, so I’d better behave myself!

Nice to see you liked De Molen Paul - we've been getting in bits from De Molen for a while now and usually always have a couple of bottles in (and others such as Kees, funnily enough that Ganstaller Zoigl is on at the moment).

I'll make sure I bring some over to Tonbridge in the New Year when we open :-) (fingers crossed anyway!)