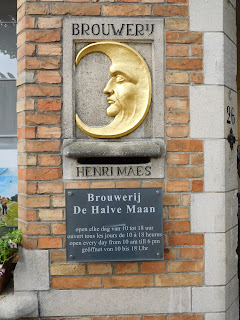 Just over a year ago I was fortunate to visit the De Halve Maan Brewery (the Half Moon Brewery), in the historic city of Bruges. I was there with a group of beer bloggers and writers, on the last day of the European Beer Bloggers post-conference tour. We had spent the night in Bruges, after a packed day touring round East Flanders, and the following morning had been treated to a walking tour of the city.

The picture-postcard centre of Bruges attracts some 6.5 million tourists a year and is a UNESCO World Heritage Site. The city is filled with Gothic brick buildings, canals and historic churches. I had been to Bruges twice before this visit, but on each occasion had only scratched the surface. It was really good then to walk around, in the company of a locally born guide who really knew her stuff, and learn about the history and the development of this beautiful city, as well as discovering more about some of the lovely old buildings and the stories of the people behind them.


After the final part of the walk, which was through the city’s peaceful and historic Begijnhof community, our guide deposited us at the entrance to the Halve Mann Brewery, where we were expected, as guests, for lunch and a brewery tour. We soon became aware that a new brew house has been installed and shoe-horned into the rather cramped city-centre the site and now occupies much of the downstairs area.

De Halve Maan brews beers under two distinct brand names; Brugse Zot with a 6% Blonde beer and a 7.5% Bruin, and Straffe Hendrik, with a 9% Tripel and an 11% Quadrapel. We were fortunate to try both beers over lunch.


Of more interest was the old brewery, which is constructed on a traditional tower principle. The old equipment has been left in situ, and gives a fascinating insight into days gone by. It is open to the public as a museum, but with the help of our attractive and knowledgeable guide we were given access right to the top of the tower, and out into the open, from where we had an amazing view over the rooftops of Bruges. From the rooftop we could see towards De Halve Maan’s modern bottling plant on the edge of the city, and it is the story associated with this facility that I now want to concentrate on. 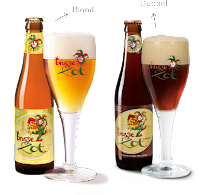 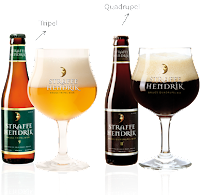 Whilst we were at the brewery, we were informed of the company’s innovative and ambitious plan to run a pipeline from the brewery, to the bottling plant. This would enable them to remove, at a stroke, the 40 tonne tankers which run daily, back and forth between the two facilities. If you have ever been to Bruges you will at once realise that the city’s narrow streets, many of which date back to the Middle Ages, were not designed with modern transportation in mind, so De Halve Maan were really keen to turn this pipe dream (if you’ll pardon the pun), into reality; not just for their own convenience, but because they desired to give something back to the city. 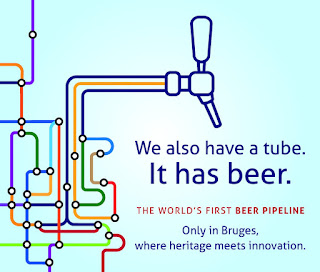 It is a distance of 3 km (2 miles) between the brewery and the bottling plant, and whilst this may not sound much, a considerable amount of work would be involved in order to bring the scheme into fruition. The pipeline was four years in planning and five months in construction. The cost was €4 million, and De Halve Maan received a subsidy from the Flemish Regional Government, but they also raised about €350,000 through crowd funding. This was one of the largest ever such undertakings in Belgium and contributors are paid back in beer. According to the news reports, those paying the top-rate €7,500 will be rewarded with a bottle of Brugse Zot every day for the rest of their lives.


I was therefore extremely pleased last Friday, to see the story which appeared on several news sites, that the pipeline is now complete and that beer is flowing from the brewery to the bottling plant. So the previous day the brewery finally bid farewell to the trucks, which had been running at between 10 and 15 per week, through streets designed for a horse and cart and now packed with tourists. The pipeline can pump 4,000 litres of beer an hour, equivalent to 12,000 bottles, all under the streets as you’re walking over them, totally unaware of what is happening below.

De Halve Maan’s managing director, Xavier Vanneste, said the idea of a pipe had seemed crazy until he saw local workmen laying underground cables and started looking into it. He said that he could have moved the brewing to beside the bottling plant built in 2010 and kept the old site as a museum, but he wanted to retain the beers as products of the old city. “People want to see something that is alive and not just some dusty museum,” he declared. 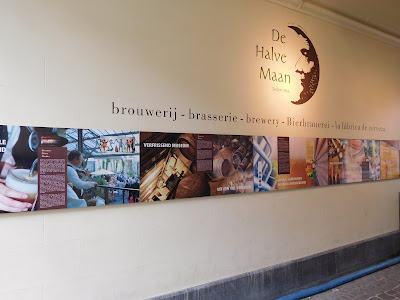 The brewery should also benefit after volumes grew by 30 percent last year to 5 million litres and are set for a further expansion of 20 percent in 2016. Vanneste said, “We could potentially increase by a factor of four or more with the new pipe. The bottleneck has been the trucks.”

As a scientist I’m bound to ask a few awkward questions, such as how is the pipeline cleaned, and what happens if here’s a leak? But having said that, pipelines are used to convey commodities such as water, oil and gas over vast distances, without any problems, so transporting beer over a few kilometres shouldn’t be too much trouble.