At 787 ft above sea level, the town of Crowborough is one of the highest points in Sussex.  Alighting from the bus yesterday in the centre of the town, and feeling the rather keen wind blowing through my hair, it certainly felt exposed to the elements, and I was wishing I had worn a thicker coat as well as a hat.

A brisk walk downhill through a residential area of mixed, but mainly quite substantial modern houses, brought my companions and I to the Cooper’s Arms; an attractive 19th Century pub constructed partially from local stone and looking somewhat incongruous amongst the late 20th Century houses and their leafy setting on the flanks of Ashdown Forest.

As mentioned in my previous post, the Cooper’s was holding its annual Winter Ales Festival, now in its seventh year. We arrived at the pub just five minutes before a bus load of around 40 CAMRA members drawn from branches in north Sussex and neighbouring Surrey. Also in our favour, were a small number of other members of our branch who had caught a slightly earlier bus and had managed to secure a table at the far end of the pub. 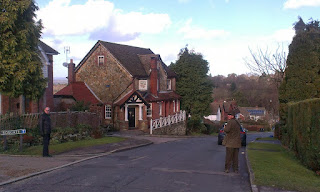 There were printed beers lists scattered about the pub, but I had already spotted which beer I was going to start with. Gun Brewery Scaramanga EP (Extra Pale), at 3.9% fitted the bill and certainly agreed with the tasting notes. This light straw-coloured, well-hopped pale ale is brewed by Gun Brewery, based at nearby East Grinstead, and was so good that I wished I’d ordered a pint; especially as the thirsty hordes from the bus had now arrived and were milling around the bar.

I decided on another pale beer, before moving on to the dark stuff, and this time I went for Chinook, a 4.1% single-hop ale from Crouch Vale Brewery. This beer was also nice and refreshing, but not quite as good as the EP. Had I drank this one first, then I’m certain I would have enjoyed it more.

So then over to the dark side and Burning Sky Porter, a fine rich dark porter with a chocolaty background, and not too strong at 4.8%, was a good one to start with. This was followed by Black Pearl Oyster Stout, a 6.2% strong stout from Eddie Gadd’s Ramsgate Brewery which is was originally brewed for a local sea food restaurant, and which is normally sold in bottle form only.

For many of my companions this was the beer of the festival, but for me that honour went to Old Freddy Walker from Moor Brewery near Bristol. Full-bodied and rich and dark, this 7.3% strong ale had been ageing in cask in the Cooper’s cellar since the beginning of 2015. Priced accordingly, it really was a stunning beer, and I was not the only one to state that it was the best beer of the day.

There was one other beer which I perhaps should have tried. From a pure “missed opportunity” point of view I’m wishing that I had, but I know my body and my lack of a hangover this morning are telling me it was a good job I didn’t. Fuller’s Golden Pride is a strong, (8.5% ABV), barley-wine style beer, sold in bottles. I still have two bottles in the cupboard downstairs, but it’s not often that I want to knock back 500 ml of such a high strength beer.

The beer is only very rarely available in cask, but Cooper’s landlord David managed to persuade Fuller’s Head Brewer, John Keeling to let him have a cask of Golden Pride; in fact the according to the tasting notes, John told David he could have any beer which Fuller’s make, put into cask; “you just have to ask”, were the words quoted. The description of a “high-strength ale, with hints of orange oil and toasted grain, with a big hit of alcohol”, was almost enough to tempt me, but in the end I resisted. All who did try it though described it as excellent.

The bus party left at around 4.30pm, which meant more room in the pub and the chance to reflect on yet another excellent Festival. I had one last beer in the form of the 5.1 % Slow Dark Stout, from local brewers, Pig & Porter. The latter had two beers listed on the festival sheet, but regrettably the 5.7% Cast no Shadow; a chocolate and orange porter was unavailable.

The landlord and his staff at the Cooper’s Arms had once again excelled themselves by putting on an excellent festival. They coped admirably with the 60 plus people who must have been in the pub, making sure everyone was served promptly, and with a fresh glass each time. The mountains of wrapped and pre-prepared cheese and onion rolls at each end of the bar soon vanished, and the kitchen staff were kept busy serving either pasties or Polish sausage and chips.

Some of our party, including me, left the Cooper’s at 5pm; allowing plenty of time to a walk back up to Crowborough Cross for the bus back to Tunbridge Wells. The others remained in the pub awaiting a couple of pre-booked taxis. They were obviously warmer than we were, but I must admit I quite enjoyed the climb back up to the main road.

I stopped off to join some of the others for a quick one, at the Pantiles Tap, back in Tunbridge Wells, but as I was feeling peckish I decided to call it a day and make for home. I annoyingly just missed a bus, and with an hour’s wait for the next one (buses aren’t that frequent on a Saturday evening), I caught the train back to Tonbridge instead. I picked up a chicken shish from the local kebab shop, and after walking back up the hill, I was sat down in front of the fire, enjoying it in the company of my family.

As I have said before, it’s a good job I don’t live in Crowborough as I would be a rather too frequent visitor to the Cooper’s. The pub is currently advertising for kitchen and waiting staff, following an upgrade of the kitchen, but I think that, however good, food will always play second fiddle to the beer at this excellent pub in its delightful setting.
Footnote: Both Gun Brewery and Moor Brewery produce beers which are un-fined, and therefore can sometimes be slightly hazy. Both believe that by not fining their beers they are creating a more natural, and better tasting product. Also, the omission of isinglass finings from the brewing process means the beers are suitable for vegans.

It looks as though you had a good day. The only beer I've had out of that lot - in fact the only one I've heard of - is the Crouch Vale Chinook, which I have enjoyed in the past.

Mention of East Grinstead always reminds me of The Norman Conquests.