Beer and Self- Abuse


I finished reading Mikkeller’s Book of Beer at the weekend. This was one of the beer-related books I received for Christmas – family and friends obviously know me well. At first glance I thought the book was rather superficial, but it actually turned out to be a lot more interesting than I first thought. The old saying “never judge a book by its cover” is particularly appropriate here it seems.

Being something of a beer geek when it comes to beer and brewing, there wasn’t a huge amount in the book that I didn’t already know, but the material about Mikkeller, his background, his other interests and how he became involved with beer were all of interest and helped to dispel a few of the myths surrounding the man and his beer.

The first thing which comes across is that Mikkel Borg Bjergsø is an obsessive character. In a previous life both he and his twin brother Jeppe were avid runners; in fact they were both multiple Danish champions. In addition they were awarded running scholarships at American universities, but Mikkel was so obsessed with the sport that he literally ran himself into the ground; developing exercise-induced asthma along the way.

He quit running in December 1997, and trained to become a teacher. During this time he developed an interest in beer and started brewing in 2002 with Kristian Keller (nickname Keller), an old friend from his running days.

The two eventually went into partnership combining their names to form the title of their new business – Mikkeller. One of their first outlets was a beer shop in Copenhagen, jointly owned by twin brother Jeppe.

The partners obviously leaned quickly and became rather good at turning out award-winning beers, but almost from the start were not interested in owning their brewery. Instead they arranged for their beers to be contract brewed; initially by Danish brewers Gourmetbryggeriet. However, when the latter suggested a partnership Mikkel got cold feet, despite Keller being in favour of the idea.

The brewing of Mikkeller beers was switched to the De Proef Brewery in Belgium, where there was a lot more capacity, alongside the technical know-how. The latter was provided by De Proef’s owner and brewer, Dirk Naudts, whilst the ideas and recipes were supplied by Mikkeller.

In 2007 Mikkel and Keller went their separate ways. Keller had already found alternative work in the music business, but after being paid off by his partner, agreed that the company name should remain as Mikkeller. By this time Mikkel had married Pernille, the co-author of this book, and when the following year the two found out they were going to be parents, Mikkel cut back on his teaching commitments and took on his first full time employee.

The business has obviously grown steadily since then and Mikkeller beers are now brewed at breweries in Norway and the USA, as well as in Belgium. The company also own four bars; two in Copenhagen, one in San Francisco and the other in Bangkok. Mikkel writes that when he is not travelling meeting importers or conducting beer tastings, he can be found in his Copenhagen office, along with his ten permanent employees. 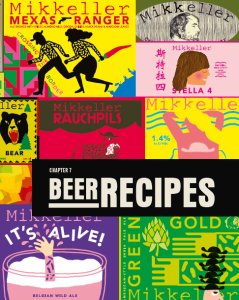 This presumably is the thinking behind the remark which first surfaced on Stonch’s blog. The comment alleges that Mikkel spends all day lounging round his flat before emailing recipes over to various breweries. Blogger Ed Wray used this remark as the inspiration for his post Beer and Wanking, as he was noticeably annoyed by the fact that Mikkel is not involved in the brewing process at all. I must admit it didn’t exactly endear him to me either; at least to begin with. Some attendees at last year’s European Beer Bloggers Conference in Brussels obviously thought the same, and in a heated debate on Beer Marketing Jean Hummler, from Moeder Lambic took the opportunity to lambaste gypsy and cuckoo brewers, with particular reference to Mikkeller.


To be fair, Mikkell is quite clear on why he has no desire to won a bricks and mortar brewery, citing the large investment, and resultant heavy borrowing this would entail, and his fears that the company would be forced to sell more and make more “commercial” beer in order to service the loans and pay the bills. In a YouTube interview with Irish blogger, Sarah Finney, Mikkel answers his critics and makes the case why it is sometimes better being at arms length, than up to your knees in spent grain, digging out the mash tun.

The rest, and indeed by far the greater chunk of Mikkeller’s Book of Beer though is taken up with chapters on the history of beer, micro-brewing and the beer “revolution”,  the various styles of beer, how to taste beer and how to brew it. There are chapters detailing beer recipes and how to match beer with food.

All in all it’s an enjoyable read, probably pitched at just the right level by being not so technical so as to put off new comers to beer, but at the same time not so simple either as to be patronising to those of us who know a fair bit about beer and brewing. The cover price, for what is a nicely laid-out hardback book is £20, but like my wife managed to, you too should be able to pick up a reduced price copy somewhere out there.

Finally, a few short words by way of explanation about the title of this post. Mikkel obviously damaged his health during his early twenties with his running obsession; self abuse, if you like. Continuing the theme brought to light on Ed Wray’s blog,  the term “self abuse” could obviously refer to the “pastime” referenced by Ed; although I will leave that to people’s imagination!
Posted by Paul Bailey at 21:22

If I ever taste a beer from Mikkeler that I like I might form a more positive view of the whole concept. It's yet to happen.

I can't see why a brewer's way of running his business is of any relevance to those who criticise and make derogatory comments such as "gypsy and cuckoo brewers" (I don't know what they are, but guessing isn't too hard). This strikes me as obsessive.

Gypsy and cuckoo aren’t the derogatory terms – they’re the jolly euphemisms favoured by “beer communicators” for what the rest of us call contract brewing. Derogatory comments would be e.g. “clowns” and “peddlers of undrinkable, overpriced crap”. The first Mikkeller beer I ever had was so unbelievably bad, and so expensive, that I have no inclination to try another.

I have yet to try a Mikkeller beer. They don’t seem to have found their way down to this part of Kent; although maybe I am wrong and just haven’t been looking hard enough.

Now I know more about the company and the man behind it, I will give one a try one – probably the next time I’m up in London. I may need to speak to my bank manager first, though!