A Brief Taste of Spain


In late November 2014, my family and I enjoyed a short break in Barcelona. Weather-wise we couldn’t have picked a worse time for our trip, as one of the heaviest storms to hit the western Mediterranean had made its way up the coast from Africa, and really hit hard on the third day of our visit. 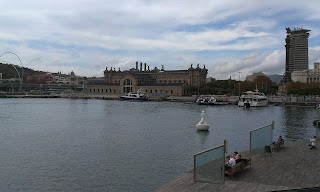 I have written about the trip here, and my post, of course, majored on the two craft beer establishments we managed to track down. I picked up a few bottles at both these places, but I also bought a few more on the Saturday; which was the second day of our visit. Knowing that nearly all the shops would be closed the following day, we had frantically done our shopping for presents and take-home goodies, and it was in a large Carrefour outlet, on Las Ramblas, that I picked up several more bottles.

I had tried to avoid the more obvious “big brewery” brands; going instead for what, on the surface at least, appeared to be some rather more artisan brews. As you will see later though, not everything is as it first seems and some of these beers turned out to be wolves in sheep’s clothing.

I enjoyed these Spanish/Catalan beers over the course of 2015; eventually finishing the last one last weekend. I had been keeping notes as I went along, and also took a few photos. Here’s what I found, in the order in which I drank them. 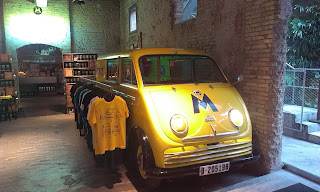 Moritz Epidor 7.2% - Amber in colour with a full malty flavour. Deceptive, as doesn’t quite drink to its strength. Attractively packaged, I bought this beer when we visited the Fabrica Moritz, a popular and fashionable brew pub on the Ronda Sant Antoni that occupies the site of the original Moritz Brewery.

Mahou Negra 5.5% - A stylishly packaged, dark, Munich-style lager, full bodied and smooth, and on a par with many Dunkel beers I have drunk in Bavaria. I later discovered that Mahou are part of the San-Miguel Group, so I didn’t spot that one!

Damm Cerveza de Navidad 2014. 6.5%. A strong pale lager, packaged in a 66cl "1876 Original". The label looks interesting as it depicts various hand-written “brewing notes”. The wort had an extract value of 14.6˚, and a colour of 9.0. Brewed solely from water, malted barley and hops, the beer was matured for 3 months and bottled in October 2014. There are some tasting notes, but my Spanish is practically non-existent, so unfortunately I cannot elaborate further.
bottle, embossed with the words

So what does the beer itself taste like? Well there’s little in the way of aroma, and despite its high ABV the beer tastes surprisingly dry. There is probably just the right level of hoppiness for a beer of this strength, although I would like to have seen a higher amount used to make this beer really stand out. However, I can imagine drinking this beer in a Barcelona bar, with a few typically Catalan dishes.

Cruzcampo Gran Reserva 1904 6.4% - This beer doesn’t drink like a 6.4% beer, despite being on the sweet side. Pale amber in colour, with not much in the way of aroma, a closer look at the bottle reveals this is a Heineken-Spain brand from Seville. I have to say, that despite its pedigree, this beer was perfectly pleasant and very quaffable. 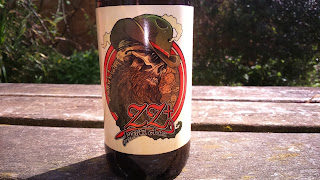 Naparbier ZZ + Amber Ale 5.5% - A very lively bottle-conditioned beer, which was
difficult to pour; so much so that I ended up with a pint glass full of foam. The beer was hazy and very malty tasting, with a background yeastiness. The beer did grow on me after a while, but was still disappointing considering the ornate, Grateful Dead inspired label and the beer’s obvious craft aspirations.

Ambar Export 7.0% - Another beer from Carrefour, described on the bottle as “Double fermented” and brewed using three different malts. The beer is certainly very malty, but not unpleasant. It is amber in colour, as its Spanish name suggests. From what I can make out, it is brewed by Zaragoana SA.

La Pirata Black Bock Imperial Stout 11.2%. I had been saving this beer for some
time as I knew it would be good. It turned out to be a real belter. The keeping qualities of a beer this strength were never in doubt, and the brewery had given my bottle a consume by date of August 2018.

The beer poured thick, black and oily. There were the typical aromas associated with a beer of this strength, such as wood, leather and a number of others which it was difficult to identify. The characteristic Imperial Stout taste of roast malt, burnt toast, and bitter coffee was present, with perhaps just a hint of Brettanomyces lurking in the background.

Cerveses La Pirata are based in of Súria, a town to the north west of Barcelona. From what I can make out, their beers are contract-brewed elsewhere. Regardless of this, their Imperial Stout was excellent, and formed the perfect companion to some strong cheese.

Seven bottles in total, representing a snapshot of some of the beers available in Spain’s second largest city. There were not many true “craft beers” amongst my haul, but it was still an interesting and, on the whole, enjoyable selection. I am off to Barcelona again, in six weeks time; travelling alone on this occasion, just for a long weekend. The reason for my visit is the Barcelona Beer Festival, which runs from 4th to 6th March.

This will be the fifth such festival to have taken place in the Catalan capital, and is being held at the Barcelona Maritime Museum, situated on the city’s seafront. There are reported to be around 300 beers at the festival, although only 60 will be available at any given time. The majority of these beers, of course, will qualify as “craft” in some way or another, and you can find further details on the Barcelona Beer Festival website.

I received my invitation to attend the festival via fellow blogger, Joan Villar-i-Martí, who I met at both the 2014 and 2015 European Beer Bloggers Conferences. Joan host his own site Blog Birraire, and has also co-authored the first Catalonia Beer Guide. You can check out his blog here, as well as links to the Barcelona Beer Festival.

I am really looking forward to the festival, and also to seeing a bit more of Barcelona itself. There’s still plenty of time to book your flight and hotel if you fancy joining me

Hello Everybody,
My name is Mrs Sharon Sim. I live in Singapore and i am a happy woman today? and i told my self that any lender that rescue my family from our poor situation, i will refer any person that is looking for loan to him, he gave me happiness to me and my family, i was in need of a loan of $250,000.00 to start my life all over as i am a single mother with 3 kids I met this honest and GOD fearing man loan lender that help me with a loan of $250,000.00 SG. Dollar, he is a GOD fearing man, if you are in need of loan and you will pay back the loan please contact him tell him that is Mrs Sharon, that refer you to him. contact Dr Purva Pius, call/whats-App Contact Number +918929509036 via email:(urgentloan22@gmail.com) Thank you.