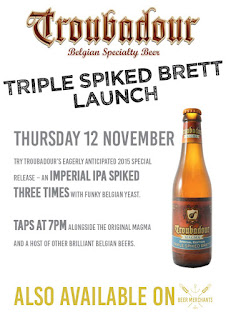 The debate sparked by my most recent post about “revitalising” the Campaign for Real Ale threw up a number of issues; one of which revolved around the question “Would lapsed or even non-members be welcomed at an official CAMRA social?”

Speaking from my own branch’s point of view, I would say, unequivocally, that they would. Despite having over 500 members on our books, we often struggle to reach double figures for our socials, so even though the branch would obviously prefer these people to be fully paid up members, we extend a friendly welcome to any new comers; members or not.

One of the things we do from time to time is hold “unofficial” get-togethers. These are normally socials, visits to beer festivals, or a ramble to a nice country pub. Unlike official socials which, owing to the lengthy timescales involved in getting them advertised in “What’s Brewing”, have to be organised weeks in advance, we can be much more spontaneous with these other events. Normally a quick on “Whatsapp”, or a message on the branch’s Facebook Page does the trick and seems to work quite well. Sometimes we even attract more people along to these unofficial “dos” than we manage for the official ones!
Last Thursday was a case in point, when a group of seven of us turned up at the Bedford in Tunbridge Wells for an impromptu get-together. We actually didn’t stay that long at the Bedford, despite some excellent beer from the likes of Pig & Porter, Goody Ales and Yeovil. The pub had a couple of live acoustic acts on, and whilst it is always good to see pubs supporting live acts, we wanted to chat. So rather than try and talk above the level of the music, which would have been both difficult from our point of view, and rude as far as the performers were concerned, we headed off up the hill and along to Fuggles; the town’s premier Beer Café.

A couple from our party had already gone ahead before I arrived, but there was time for me to enjoy the excellent, citrus flavoured Yolo #6 from Yeovil Ales. I actually had wind that a special event was taking place up at Fuggles, as earlier in the day, I had received an email from the British Guild of Beer Writers informing me that  Cave Direct Beer Merchants would be launching Troubadour's annual special IPA in two locations – Fuggles in Tunbridge Wells and the Lowlander Cafe in Covent Garden.

Now this of course was quite a scoop for Fuggles, although I must confess I had not heard of Troubadour before, but I understand that since their foundation just over 10 years ago, the company have made quite a name for themselves, both in their native Belgium and, more recently, further afield.  What made the launch so interesting was that this year's version of their Magma IPA had been spiked three times with the wild yeast, Brettanomyces to create a sour, saison-style beer. It was going to be tapped and served alongside the original, non-spiked IPA.

Fuggles was heaving when we arrived; although we later discovered that some of this was due to an office “leaving-do” which just happened to be taking place at the same time. We found the advance party from our group, and managed to pull up some chairs, but not before ordering our drinks from the bar. Fuggles were running a special offer of a third of each of the two Troubadour beers for £3.50. We all opted for this, and it was interesting comparing the two beers side by side.

Now I wouldn’t normally go straight in for a couple of 9.0% ABV beers; certainly not on a school night, but both beers were well-crafted and most enjoyable. Whilst initially preferring the original Magma IPA, I found myself warming to the “Brett” spiked version. Others needed a little more persevering, but we all agreed this was a good exercise. To give some idea as to the taste of the original Magma, Troubadour’s website describes it as “An amber coloured beer with the bitterness of an American IPA but balanced with the fruitiness of a Belgian Triple.”

Normally I would start off with the weakest beer on the list and then work my way up the gravities, but on Thursday it was a case of doing things in reverse. Cloudwater Porter from Manchester, which came in at a mere 6.0% was next up, and proved to be an excellent dark and tasty porter, with plenty of roast and chocolate flavours, and my final beer of the evening, was Tonbridge Green Hop Ale which, after the high octane beers, proved an ideal palate cleanser. So an interesting evening, with some good beer in pleasant surroundings made all the more enjoyable by the company of friends.


One final point, all but one of our party on Thursday evening, were CAMRA members, but we quite happily switched back and forth between the cask and the keg beers. There are no prejudices about what makes a good beer amongst our group; the ultimate proof being what does the stuff in the glass taste like. I am not sure whether CAMRA as a whole will ever come round to this way of thinking, or whether it will remain constrained by its definition of real ale. It may be too much a leap of faith for the organisation to make such a change, but the fact that many members now put more credence on the quality and taste of the finished beer, rather than how it is stored and dispensed, does give grounds for optimism.

Interesting point about your group happily alternating keg and cask. I must get to Fuggles when I'm in Southborough next.

I was really pleased to read you left the Bedford so you didn't talk over the music - good form.

Yes Martin, the music in the Bedford consisted of a number of acoustic sets (with minimal amplification). As well as being rude, and potentially off-putting for the performers, it's not fair on the rest of the audience when people start talking over what is happening on stage.

Fuggles is definitely worth a visit, next time you are in the area.