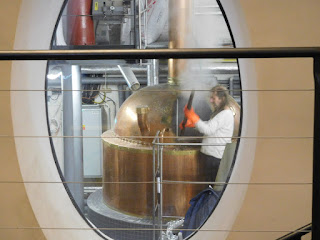 Continuing my narrative about pubs in Prague, I move on to describe four more pubs in the city; all of which brew their own beer.

I’ll start first with one of the oldest, and one which is some way from the city centre. Pivovar u Bulovky otherwise known as the Richter Brewery Pub, was founded in 2004, by František Richter; a man well experienced in the Bavarian brewery scene. It quickly established a reputation for the quality of its house-brewed beers. Tucked away down a quiet side-street, just a short walk from tram stop Bulovka, Pivovar u Bulovky is well worth seeking out.

My son and I went here on two separate evenings, back in September 2012, as it was only a 10 minute tram ride from the hotel where we were staying. It's not terribly large inside so we were lucky to get a seat on our second visit.  The walls and the bar are panelled with dark wood that matches the furniture, and the windows don't let in too much light. The pub has a legendary reputation with Prague drinkers and also has a loyal following of locals from the surrounding Libeň district.

This, coupled with the quality of its beer, means it can get very busy. Over-seeing the bar are the polished-copper brewing vessels which are used to brew a variety of different beers. These often include top-fermented styles, such as Porter, Alt, Stout or Weizenbock, but the pub staple - Richter Ležák light lager, is available every day.

We ate at Pivovar u Bulovky on both visits, but be aware that the pub has no English menus. It does have German ones though so if, like me, your Deutsch is up to scratch you will be ok. On more recent visits to Prague I’ve missed going to this excellent brew-pub; mainly because I was staying on the opposite side of the city.

By contrast the next brew-pub only opened earlier this year; and what’s more it couldn’t be more centrally located, being opposite tram stop Národní Divadlo, and  just a minute or two’s walk away from Národní Třída metro station. Pivovar Národní is housed in an imposing renovated old building, part of which looks like it may once have been a church. I had noticed it the previous day, as we went passed on the tram, so it seemed logical to give it a try the following evening.

Inside is a large restaurant, with the bar, and the brewing kit to the right, as one enters. There is also a beer garden behind the pub, but we didn’t venture out into it. The house-brewed beers are sold under the Czech Lion brand, and include an 11° unfiltered and filtered pale lager, a 13° amber lager and a pilsner. The beers are heavily malt accented and not overly bitter, but are nevertheless very pleasant and quite quaffable. I stuck with the 11° unfiltered pale, whilst Matt opted for the pilsner. Our meal of roast beef with white bread dumplings was also very good.

Next up is another recent brew-pub, Vinohradský Pivovar, which opened its doors in November 2014. The pub is located in part of the old Vinohrady Brewery; the fermenting room to be precise. The original Vinohrady Brewery was quite a large concern, which dated back to 1894; when the first beer was served. The brewery had its own malt house, and at one time served as an institute for brewers.

After WWII and the nationalisation of businesses which followed the communist takeover, brewing ceased and the building fell into disrepair. The block suffered a large scale fire in 2000, which destroyed everything apart from the aforementioned fermenting room, where the current brewery is housed. The head brewer at Vinohradský Pivovar is none other than František Richter; founder of Pivovar U Bulovky, described above.


We visited Vinohradský Pivovar on the afternoon of our last day in Prague. It had been raining heavily all day – the rain which, after an exceptionally dry summer, the hotel receptionist said the countryside was crying out for. We were just glad to get out of it, having caught the tram along from Muzeum Metro station.

A set of steps led down from the street to a whitewashed vaulted room, which echoed with the customers’ conversation. We found a table opposite the rounded tunnel like windows which give drinkers a view into the brewery. Each is labelled explaining exactly what part of the brewery one is looking at. There is another floor below, which I only became aware of when I nipped down to the gents. Here there is more dining space, plus another set of taps, sturdy wood tables and chairs plus places for standing guests.

After our beers arrived, I walked over to the windows and had a look through to the brewery. As you will notice from the photos, it is a substantial affair which, to me, looked far too large to just be brewing for the one outlet. I therefore suspect Vinohradský Pivovar brew for other pubs and bars in Prague.

According to the Prague Beer Garden website(Vinohradský’s own site is in Czech only), the house beers are an 11° and 12° light lager plus a 13° amber lager. The 12° lager has a more caramel touch to its malty body, while the 11° is a fresher, classic light lager. Ales, bocks and other seasonal brews also feature on the pub’s rapidly changing beer menu.

During our all too short visit to Vinohradský Pivovar, I tried the 11° light lager and the 13° amber lager. Both were really good, but the former was excellent, and was by far and away the best beer I had on the entire Czech trip. Full bodied and unfiltered, with a cloudy richness which is hard to describe, but instantly recognisable. Combine this with the fresh and well-balanced bitterness from the hops, and you are on to a real winner. Unfortunately our itinerary did not permit a return visit, but I highly recommend the place to one and all.

The final pub featured in this round up, was not only the one we visited on our last night in Prague, before departing for Český Krumlov, but it was also within walking distance of our hotel. This isn’t the first time that we’ve found an absolute gem of a pub in the immediate vicinity of where we’ve been staying, but it always strikes me as ironic to find these places, virtually on the doorstep, after days of riding around various cities in search of that elusive perfect pub selling the perfect beer.

Sousedský Pivovar Bašta, is a two minute walk from tram-stop Nuselska Radnice, on line 18, and is a friendly and well-patronised neighbourhood brewpub, which opened in early 2008. We found it courtesy of the excellent Otto’s Rambles site, taking note of the fact there are no English menus available. This wasn’t a problem as there was a group of English students sitting at the next table that helped us out. In addition the friendly waiter pointed out a few of his own recommendations; the roast chicken with mash potato and gravy going down particularly well!
.
I didn’t take any photos of the pub interior, but from memory it was a nice pub with several wood-clad rooms, fitted out with some large tables. One of these rooms was reserved for a meeting or perhaps a party of some description. Because of this we were lucky to get a seat, but as is common on the continent, some of the local budges up and made room for us on the end of their table.

The in-house brewery, which is contained in a side room, produces a range of four beers of which three are generally on at any one time. There are also a number of specials on sale from time to time. We gave both the Svĕtlý ležák light and the Polotmavý ležák amber a go, and they were both really tasty; the former going especially well with the roast chicken.

Although we caught the tram to the pub, it was only one stop away from the stop by our hotel. As we had just missed one after leaving Sousedský Pivovar Bašta, we decided to walk back through the rain, after what had been an excellent, but totally unexpected final evening in Prague.

Very useful - not been to ANY of these (I can be excused with the three newer ones but have had many chances to go to Bulovka and never bothered. Will visit Vinohrady one very soon.

Appreciate the detail Paul, including the food photos. It'll be 20 years since I went to Prague, which is too long. I did get to Cesky Krumlov recently, and we were tempted to jump on the student bus to Prague, but want more time to do your recommendations justice !