The Rest of the Dark Beers From Beer Hawk


I promised Zoe Piper, the online marketing manager at Beer Hawk, that I would post my review of the rest of the beers  her company kindly sent me. I reviewed six beers first time around, and assumed there were another six to go. It turns out I miscounted, and there were actually an additional nine beers so, without further ado, here are my thoughts and impressions of this rather fine bunch of dark beers.

Mad Hatter Brewing Company - Hare of Darkness 7.4%
If I hadn’t read the small print on the label describing this beer as a “Black IPA”, I would have described Hare of Darkness as a strong stout. It really is “as black as your hat”, and is incredibly bitter (IPA?), with a burnt almost liquorice like taste. There’s not much other information on the label, apart from the fact the beer is hopped with Galaxy and Centennial hops.

I have never been comfortable with the term “Black IPA”, and refuse to give it credence by recognising it as a style. Only the Americans could have come up with this sort of nonsense. To me, this beer is a strong stout, which borders on being an Imperial Stout. Unlike some of the other beers tasted above, this one is definitely a beer for sipping, as it doesn’t take any prisoners.

The Ticketybrew Company - Stout 5.4%
Described as “a roasty stout, with a smoky, silky finish”. I wouldn’t argue with that description, apart from saying I detect very little smokiness. I appreciate I’m something of a “smoke” addict, but having drank some of the finest “smoke beers” in the world (I’m talking Bamberg here), I find other beers which claim to be “smoked”, often pale in comparison.

What I can instantly detect in this beer is the presence of treacle – and I don’t like it! I noticed it before I had even looked at the ingredients list. Just a personal foible, but black treacle has no place in a beer, so far as I am concerned, no matter how black or how stout the beer is!

Fortunately the Belgian yeast, used to brew this Ticketybrew beer comes to the rescue, adding a touch of spiciness, and the malted wheat helps smooth out the almost iron-like taste of the treacle. The beer did grow on me, but it’s not one I would rush out and buy.

Left Hand Brewing Company -Milk Stout 6.0%
Roasted malt and coffee flavours build the foundation of this creamy sweet stout - so says the label anyway. Dark-brown/dark ruby-red in colour with a loose light-brown head, there’s little in the aroma, but plenty in the taste of this mid-west American take on a classic old English ale style.

Full-bodied, as one might expect from a milk stout of this strength, there are also plenty y of roast malt and coffee notes- as stated on the label. An enjoyable and interesting beer, with an interesting artistic label to boot.

To Øl - BlackBall Porter 8.0%
Pours jet black with a light-brown rocky head. Roasted and chocolate notes are in the aroma, but these leave the drinker totally unprepared for this intense bitter-sweet chocolate full-bodied, almost oily beer. 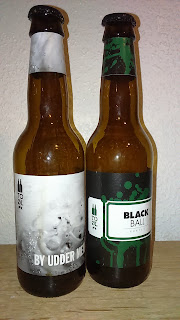 This really is one of the most intensely flavoured beers I have drunk, and full credit to Danish brewers To Øl. The statement on their website sums up the philosophy behind the company. “To Øl  wishes to make potent beers, packed with flavour and character. Beer, which you do not forget easily (unless you just had too many). We make beers with an edge and with a drive that prefers quality way before quantity.”

Give this, or any other of the company’s beers you come across, a try; you won't regret it.

To Øl - By Udder Means 7.0%
In case you hadn’t guessed from the rather painful pun, this beer is a milk stout. Similar in appearance to the other To Øl beer, this one I perhaps smoother - the effect of the lactose? Again, full bodied, with lots of roast and chocolate flavours. There is also a very noticeable hop aroma when the beer is first poured.

Another extremely good beer with a modern Scandinavian twist on a classic English style. Like the Black Ball Porter above, this is another very full-flavoured beer which definitely ticks all the boxes.

Rogue Mocha Porter ABV – not declared
I’ve been a fan of Rogue Beers for many years, even though they are rarely seen for sale in UK shops. I first became aware of the company when a work colleague brought me in a bottle of Rogue Dead Guy Ale. His son had bought a short-dated case of the beer at a knock-down price and, much as he liked the beer, he was having trouble getting through it. He also knew ht given my penchant for a decent glass of beer, I would appreciate this one. I certainly did, and have kept a lookout for Rogue Beers ever since. 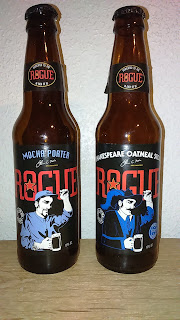 The Mocha Porter is one of two Rogue bottles included in my selection from Beer Hawk, and like all Rogue beers the label features an appropriate character giving the trade-mark “clenched-fist” salute. The beer itself is a deep-dark ruby-red colour, topped by a white fluffy head. The ABV is not declared on the bottle, but the company website gives it as 5.3%, and then goes on to describe the beer as having a bittersweet balance of malt and hops, with a light creamy finish. This encapsulates the beer, as far as I am concerned; especially the creamy finish.

As might be expected from the description, the beer slides down a treat, and is just the ticket on a damp and misty early November evening.

Rogue Shakespeare Oatmeal Stout ABV – not declared
Pours jet black, with a tight, light brown head, this American oatmeal stout certainly packs in plenty of flavour. There is a rich creaminess about this beer, which combines well with the dark roast coffee notes, and the slight lactic taste lurking in the background. The latter reminds me of the U Fleků house-beer, before they cleaned up the taste.

Another excellent beer from the extensive Rogue stable; a sign on the label informs the drinker that the beer is a World Stout Champion. I can quite see why. Like with the other Rogue beer, the ABV is not declared on the bottle, but the company website gives it as 5.8%.

The Ilkely Brewery - The Mayan Chocolate Chipotle Stout 6.5%
Ilkley Brewery, based in the Yorkshire town of the same name, brew some stunning beers, and this unusual chocolate stout is no exception. Inspired by an ancient Maya recipe, this beer is brewed with Chipotle Chillies, chocolate malt and real chocolate. The resulting beer is velvety smooth bittersweet stout with the added heat from the Chipotle Chillies; an odd combination, but one which is known to work.

Deep dark, ruby-red in colour, with a contrasting tight creamy head, the Mayan is certainly a beer well worth getting stuck into. I remember drinking a draught version of this beer, back at the start of the year, and this bottle certainly brought back some happy memories.

According to the label  “Temptation is an Imperial Russian Stout: a style that was exported to Imperial Russia in the 19th Century. The massive body supports oily coffee, liquorice and chocolate flavours. The alchemy of Golding hops and roast malts make a complex aroma of anise, caramel and blackberries.”

Well despite such a mouth-watering write-up, I’m going to resist Temptation and leave opening this beer until Christmas. Such a high-strength beer commands respect; especially when it comes in a 500ml bottle! This is a beer which will go well with the Christmas pudding or with the cheese and biscuits afterwards.

There is no hurry to drink it, as the beer is bottle-conditioned and has a Best Before End date of June 2020!


If you would like to send me beers to review, please be aware that I will give a totally honest opinion of your product. If I like it, then great, but if for some reason I don’t, then I will say so.


If the beer is not to my taste, but has been brewed correctly, and is not suffering from off-flavours, then I will again be honest. I will probably say that the beer in question is a good example of the style in question, but it just doesn’t float my boat! You can’t say fairer than that!