Austria isn’t a country particularly renowned for its beer; a fact which is rather surprising considering it borders both Germany and the Czech Republic. There is no Reinheitsgebot in place ensuring Austrian beers are brewed from just malted barley, hops and water, although it is fair to say many of the country’s 170 odd brewers do adhere to the principles of that 500 year old consumer protection legislation. 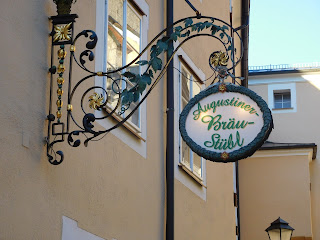 There are of course, pockets of excellence and I mentioned one such example in my previous post about my impending trip to Salzburg. I arrived back home yesterday, and pleased to report that the beer at Augustinerbräu Kloster Mülln is as good as ever, and I even managed to sample the Weinachts Bock (more about that in a separate post).

So far as the rest of the beer in Salzburg is concerned, I managed to sample beers from several Austrian breweries, along with a few from the city itself, and whilst they weren’t world classics, they were still perfectly quaffable beers which suited the time and the occasion. This largely means they were enjoyed in various pubs, bars and restaurants, normally as an accompaniment to a meal. The trip was, after all, a family holiday, rather than a beer-hunting expedition! 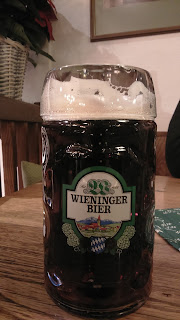 Like in neighbouring Germany, it is often difficult to know exactly which of a particular brewery’s products you are sampling. Point of sale material on beer founts is often restricted to just the brewery logo, and menus, particularly in restaurants, will just list the brewer of the beer, rather than specifying the particular type. This is quite surprising as in common with their Teutonic neighbours many Austrian breweries brew a bewildering number of different beers, many of which have suspiciously similar strengths. Moral of tale - it’s no use being a “ticker” in this part of the world!

The beers I did get to sample include, in no particular order, Stiegl Goldbräu and Paracelus Naturtrüb; Wieninger Dunkel; Hofbräu Kaltenhausen Original; Gösser (variety unknown); Zipfer Urtyp and Sternbräu Stern-Bier. However, rather than write about the beers it’s probably better to describe a few of the pubs and kellers they were enjoyed in.

I intend doing this in a subsequent post.
Posted by Paul Bailey at 21:35

It's a good point about not knowing what you're sampling Paul. In Austria & Germany you tend to be expected to sit down rather than stand at the bar reading beer fonts. My experience is then that I end up asking for Helles or Dunkels, though to be fair most printed menus do list the beers.

I quite liked the limited choice, in a Sam Smiths sort of way.

NB Glad you had a good trip.

We had an excellent trip, thanks Martin, with a sprinkling of snow on the first day, followed by bright, but cold conditions on the following two days. Just right, in fact, for a spot of sight-seeing and browsing round the Christmas markets.

With regard to beer menus, some places are obviously better than others, but I have come across places which make no distinction between draught or bottled beer. You don’t even know when the beer arrives at your table; as if it is bottled it’s invariably all been poured into the glass by the waiter/waitress, before it’s placed in front of you.