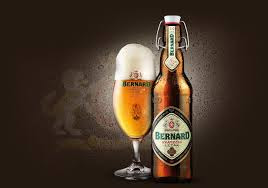 On my recent trip to the Czech Republic, the group I was with was fortunate to visit one of the country’s most respected breweries, namely Bernard, who brew in the small town of Humpolec, which was a short bus ride away from our base in Jihlava. Bernard beers have an excellent reputation, both at home and abroad, and when you read on the company’s website the care taken over the selection of ingredients and the attention to detail in the brewing process, you can understand why.

For example, Bernard malts its own barley in a traditional floor maltings, at Rajhrada near Brno. They select only the highest quality Czech hops, ensuring the perfect balance between aroma and bitterness. They use their own spring water from the Czech-Moravian Highlands, which has the ideal attributes for brewing. They also have their own, unique yeast culture.

On the brewing side the lengthy maturation process is separated from the primary fermentation, with the former being carried out in traditional, horizontal lagering tanks. Post maturation Bernard beers are NOT pasteurised; instead they undergo micro filtration, in a process designed to maintain a fresher and more natural taste. This, the brewery claim, is what makes Bernard beers exceptional.

Our visit to Bernard had been pre-arranged by our tour organiser, and took place on our first day in Jihlava. The brewery is situated close to the town centre, and was just a 15 minute walk away from the bus station. It was cold and damp on the day of our visit, with periods of quite heavy rain, but this failed to dampen our spirits. We presented ourselves at the brewery shop opposite the main plant, where we were met by our guide.

Before embarking on the tour we each had to don one of the obligatory hi-vis waistcoats which now seem to form such a feature of these types of visits. After that we were led across the road to the brewery itself. There was some work going on at the front of the main building, but we were led round the side and into the bottling hall. This proved to be a rather brief look, as the bottling lines had stopped due to a changeover of product/bottle, so instead we were led up into the impressive new brew-house.
It was rather warm inside, which made a pleasant change after the cold damp conditions outside. What I found particularly impressive was the shiny, new brewing vessels were all constructed out of copper, which had been polished so you could almost see your face in them. We could see into one of the lauter tuns, which was just being cleared of spent malt grain; however, there is no getting in and shovelling out the wet grains here, as the process was fully automated. In the adjoining room were several brewing kettles, although in view of their construction they could rightly be described as coppers.

The next part of the plant was a complete contrast, as we were shown into the maturation room, where the beer cold conditions in traditional horizontal tanks for a period of between four and six weeks. The conditioning is carried out at temperatures close to freezing, so after the almost tropical heat of the brew house, the low temperatures in this particular section were really noticeable, and we were all glad when we stepped back outside again.
The primary fermentation is conducted in large tall, conical fermenters, sited at the rear of the brewery. The beer undergoes seven days fermentation here before being transferred to the aforementioned maturation room.  The final area we were shown was the kegging plant, where kegs are washed and sterilised before being filled with fresh beer. There was a substantial amount of automation in this section, which included a built in check-weighing system which rejected any kegs which were below the required fill weight.

Then came the part of the tour we had all been looking forward to the most; namely the sampling of some of the products. For this we were shown into the staff canteen, several floors up and with a good view over the rear of the site. Humpolec was looking very wet and rain swept, but no matter; we were warm and dry and had several glasses of Bernard beer to enjoy. The beers we sampled were an unfiltered 12˚ light lager at 5.0% ABV, plus the 5.1% ABV dark lager. The latter in particular was very smooth tasting, but on balance, I preferred the light version. We were also given some bottles of Bernard Bohemian Ale to try. The latter is bottle conditioned, and weighs in at 8.2 % ABV.

Whilst drinking our beer, we were shown a short video which outlined the history of the brewery and which showed the contrast from 1991, when the current management team took over, to the present day. At the time of the collapse of the country’s communist regime, the brewery was known as the Humpolec Brewery and was part of the Southern Bohemia Group of breweries. The plant was on its last legs, following years of under-investment, and closure seemed inevitable, despite brewing having been carried out on the site since 1597. Local people understandably wished to see it continuing, and salvation came when three partners, Stanislav Bernard, Josef Vávra and Rudolf Šmejkal, bought the business at auction, when it was being privatised. The name “Bernard” was chosen for the new company, because it is recognised in many languages.
In 2000, the partners sold a 50% share of the business to Duvel Moortgat of Belgium. The new stakeholders have invested heavily in the company and this has paid dividends. We were told, for example, that production had doubled over the past 10 years from 120,000 to 240,000 hectolitres per annum. Bernard beers can now be found in many Czech bars, and the company currently exports to around 30 different countries. We learned that 60% of Bernard’s output is in keg, whilst 40% is in bottles. This is against the trend for the Czech market, where bottled beers command a high sales volume. Mr Bernard and Mr Vávra are still actively involved with the brewery, with the former concentrating on marketing, and the latter acting as the company’s Brewmaster. 176 people are currently employed at the Humpolec site.

At the end of the tour, we were all given a stylish badged, Bernard beer mug, plus a pen.

Footnote: included here is one of the photos we were shown of the brewery before renovation. The B&W photo clearly shows a stack of traditional Czech casks, which look remarkably similar to British ones. If you look in CAMRA’s first Czech Good Beer Guide, published in 1996, author, and CAMRA founder, Graham Lees explains that up until the early 1990’s, Czech beer had been packaged in casks which allowed the beer to “breath”. The beer was delivered to the customer’s glass by an air-pressure system similar to that still used in parts of Scotland today. The result was a beer with a smooth texture and a thick dense head.

In a virtual re-run of the "kegification" which occurred  in Britain during the 1960’s, virtually all Czech breweries have now converted to keg storage and CO₂ dispense.
Posted by Paul Bailey at 21:58