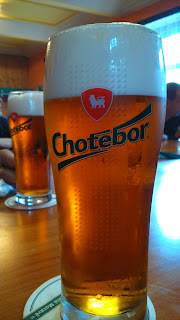 We visited two breweries during the recent trip I made to the Czech Republic and whilst they both made good beer, they could not have been more different. I have already written about the visit to the Bernard Brewery at Humpolec, but two days later, and on our last full day in the country, we had pre-booked a lunchtime tour of the Chotěboř Brewery, in the town of the same name.

Chotěboř is a brand new brewery, which began beer production in 2009. Despite its modernity, it follows classical Czech brewing practices, with a decoction mash regime followed by a full, ninety minute, hop-boil. The beer is then fermented in open tanks, before undergoing maturation traditional, horizontal lagering tanks.  Only the finest ingredients are used to make the beer, with Moravian malt, quality aroma Saaz hops from the famous Žatec region, and spring water from the Czech Moravian Highlands of Vysočina. 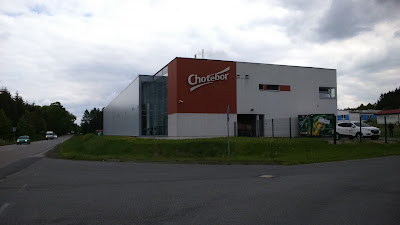 We travelled by rail from Jihlava; changing onto a rather crowded local train at the important junction town of Havlíčkův Brod.  From there it was a short 25 minute journey to Chotěboř, followed by a 20 minute walk to the brewery, which is sited just out of the town, on the edge of a forest.

There were several members of the party who, expecting a micro-brewery along the lines of Goachers, came in for a bit of a shock as we approached the brewery, and the size of the operation became clear. This was no one man operation, but a place where some significant investment had taken place. A plaque on the brewery gate indicated that some of the money had come from the European Union. The imposing new brewery building, with its outer glass wall, allows visitors to observe the brewing process at close hand. Inside the brewery uses modern production technologies for controlling and monitoring temperature stages during both brewing and fermentation, and also for the filtering and filling procedures, (both bottles and kegs).

So far, so good, and we were all looking forward to a look round the plant, followed by a tasting of the products. However, as we passed through the electrically-operated gates and entered the site it soon became clear that all was not well, and we were not expected, after all. It turned out that the person with whom our group leader had booked the tour with, no longer worked for the company, and although our man presented a copy of the email, confirming the tour, the former employee had not passed this on before he left. As we waited outside in the pleasant May sunshine, it seemed as though an impasse had been reached and we would not be getting our tour.

Full marks to our organiser for persistence though, as after 15 minutes or so of what must have been quite terse negotiations, he emerged from the brewery office to announce that the tour would be going ahead after all. The arrival, by car, of a brewery worker who looked as though he had just been dragged out of bed confirmed this, and a short while later we were led inside for what turned out to be a very impromptu tour.

Our guide spoke some English, and was able to explain the process and answer some of our questions as he showed us round. We didn’t actually see the brew-house, but after viewing various pipe work, pumps and ancillary equipment beneath it, we were shown into the fermentation building, which takes up virtually one side of the brewery. It was here that we saw for ourselves, beer fermenting in open-top, rectangular fermenters, of the sort once common in many traditional British breweries; and still in use at companies such as Harvey’s of Lewes.

Opposite the open fermenters, was row after row of horizontal lagering tanks, where the beer undergoes a slow and lengthy maturation process. Now came the best, but most bizarre part of the tour. Our guide disappeared for a short while, before re-emerging with a tray full of glasses. He then proceeded to unscrew a thin, coiled stainless steel pipe, attached to the front of one of the lagering tanks, and began the slow task of filling up our glasses. It was slow, because as the beer was still maturing it was extremely lively, but showing the patience of a saint, our host filled all the glasses and passed them to us eagerly awaiting visitors.

I have drunk beer straight out the lagering vessel on only one previous occasion. That was at the end of a tour of the Pilsner Urquell Brewery, back in 2012. This time though, instead of a small, clear-plastic cup, I had a full half-litre, and after the beer had warmed up a bit, (it is kept at just 2˚ inside the tank), the taste began to come through. We were told this was the 12˚ Premium Light Lager (5.1% ABV), and very nice it was too, especially as it was unfiltered at this stage, and completely natural.

Unfortunately, given the time it took to pour us all a drink that was the only beer we were given at Chotěboř. We moved on to the kegging and bottling areas, but there was nothing happening here. We managed to glean from our guide that the brewery only operates two or three days a week, depending on demand. This was hardly surprising, given the size of the place and the high degree of automation.

Following an online search, I discovered that the yearly production at Chotěboř is 10,000 hl, with possible supplementary expansion of up to 25,000 hl a year. Six beers are produced; one of these though is a non-alcoholic beer. For a more details of these beers, see the brewery website here, and for a high-definition video of the brewery, click on this Vimeo link.

After our trip round the Chotěboř Brewery, we returned to the station.  Before catching the train back to Havlíčkův Brod, we called in at the substantial, and popular, station restaurant for a lunchtime drink. Chotěboř 12˚ Premium Light Lager was one of three beers on tap there; the other two being  un-pasteurised Starobrno, and a beer from Rebel, but as we were due to visit the Rebel Brewery tap later on that day, and Starobrno is a beer now owned by Heineken, I stuck with the Chotěboř.

We all managed to squeeze around a large rectangular table, enjoying the plain, but pleasant surroundings of this provincial station bar. I think the lady behind the bar was pleased with the amount of beer our party of thirteen must have got through; so long as she had enough for her regular customers, later in the day! For my part is was good to enjoy the experience of drinking in this out of the way place, and sample a piece of the real Czech Republic, in a part of the country which few UK tourists visit.

As for Chotěboř Brewery; do give their beers a try should you come across them, but if contemplating a brewery tour, double check you are still on the list before turning up!