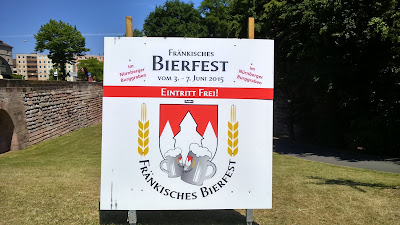 Just 12 days after returning from my Czech trip, I found myself back at Stansted airport, embarking on another journey to foreign parts for a three night stay in Nuremberg, in order to sample the delights of the Franconian Beer Festival (Fränkisches Bierfest).

I’m not quite sure when I first became aware of this festival, but for the last two years my plans to visit it have been thwarted by clashes with other events. The year before last the festival began just a few days following my return from a business trip to Japan; whilst last year’s event was too close to the European Beer Bloggers’ Conference to enable me to do both.

This year was looking similar, but with a gap of almost two weeks in between Fränkisches Bierfest and my return from the Czech Republic, I figured I could squeeze in a short visit to Nuremberg, without attracting too many adverse comments from the family. Actually, my son Matthew had originally planned to come with me, but due to a clash of holiday commitments at his work place, had to cry off, almost at the 11th hour. Undeterred, I finalised the arrangements and set off alone.

This year’s festival was the 18th, and from what I understand the event has increased in size each year. However, unlike Munich’s world famous Oktoberfest, and the lesser known Cannstatter Volksfest which takes place in Stuttgart, Fränkisches Bierfest is relatively unknown in the English-speaking world; although it has to be said that us Brits are gradually becoming aware of Franconia’s authentic and tourist-free beer festivals. These are usually centred around the local church or a particular saint's day, and are known as a Kirchweih or Kerwa.

Annafest is probably the best known Franconian beer festival, and this outdoor event, held on a wooded hillside overlooking the town of Forchheim, has become increasingly popular with visitors from the UK. Two years ago my son and I had a great time there, and I know quite a few people from these shores who have done the same. Bamberg’s Sandkerwa, which takes place around the August Bank Holiday weekend, is another event which also attracts many native English speakers; although here the visitors are much more likely to come from across the Atlantic, than the British Isles.

The common theme which runs through all these German beer festivals is their emphasis on local beer. For example, the beers available at Oktoberfest are restricted to the products of Munich’s “Big Six” breweries, and then they confined largely to a single and rather strong “Festbier”, brewed specially for the occasion. Annafest offers “Festbier”, from Forchheim’s four breweries, plus a few from slightly further a field, whilst Sandkerwa is also largely restricted to the products of Bamberg’s breweries, although at least there are nine of them to choose from.
What makes Fränkisches Bierfest virtually unique in Germany then is it offers a choice of beers, from around 40 different breweries, drawn from all over the Franconian region. In this respect it closely resembles a typical British CAMRA Beer Festival, rather than one found in other parts of Germany. It was this aspect which particularly appealed to me, coupled with the festival’s outdoor setting in the moat which runs below the impressive bulk of Nuremberg’s Kaiserburg, or Imperial Castle.

This year’s Fränkisches Bierfest ran from Wednesday 3rd to Sunday 7th June, and apart from some thunder, in the early hours of Sunday morning, was blessed with wall-to-wall sunshine. In the end I only attended two sessions; the first being on Thursday evening, and the other on Friday afternoon, from just after opening at 2pm to some undetermined time in the early evening. Both sessions were packed, although the Friday afternoon one did start out nice and peaceful.

Some points to note: there were 38 breweries in total; all but one based in Franconia. Each brewery had its own stand, and virtually all offered between two and four different beers. There was plenty of seating (UK
festival organisers please take note!), with the polished wooden tables and benches which are typical of most German beer gardens. There were also plenty of pub-type umbrellas, providing some much needed shade - essential in 30˚ of heat. Most beers were priced at €3.20 - €3.50 per half litre. A refundable deposit of €2.50 was charged on glasses, and as most were badged glasses, unique to the owning brewery, it made sense to return them to where they originated, rather than keeping the same glass with you for the duration and then having to trek back to your starting point to get your refund. Food was the usual German fast food offerings of sausages (either Nürnberger or Thuringer) in bread rolls, grilled mackerel or pizza. I did see half an oxen being prepared for spit-roasting, early on Friday afternoon, but that wouldn’t have been ready until well into the evening.

I sampled beers from 11 of the 38 breweries exhibiting at the festival. These included various Hells, Vollbiers, Landbiers, Kellerbiers, plus the odd Dunkles and Pils. All were good; with some served direct from wooden casks, although most were served from pressurised kegs. There was a great party atmosphere, and whilst most festival goers were within the 20-30 year age bracket, there was still a good sprinkling of people from other age groups. What was particularly pleasing was the number of female visitors, and I would estimate that women made up roughly 35-40% of the attendees.

All in all it was a cracking festival; better than Annafest in terms of the number of different beers available AND for the fact that half litres rather than litre Maß Krugs were the order of the day. Its central location, and stunning setting, both added to the overall appeal of Fränkisches Bierfest, making it, for me at least, a festival I very much want to visit again. If you want a beer event which combines the best of both German and British festival traditions, then this one should definitely be on your agenda. If you need more persuading still more, then take note that, unlike most UK festivals, admission is free! See you there next year, then?
Posted by Paul Bailey at 22:28

Sounds great. Nuremberg Castle is a wonderful setting for a festival. Hope you found time to explore the city and its great pubs as well.

I'm taking the family back in the autumn half-term for a 3rd year in the row; the region is one of our favourites for holidays as well as beer.

I've only spent an hour or so in Nuremberg - changing trains on the way to and from Bamberg - but I've always got the impression that, outside of festivals like this one, the beer choice is a lot more limited than in Upper Franconia.

Was great to meet you on your visit, Paul! Nice impressions of the fest, I think it's an excellent destination for those wanting to explore beer from far-flung corners of Franconia without having to travel so far.

I would only quibble that traditional fests like the Annafest aren't really beer fests in the same sense. Some call them that, but they are really county fairs first and foremost, it just so happens that they also serve Festbier. This fest really is a dedicated beer fest and is as such very unique, as you explain.

The most popular Franconian fest really is the Erlanger Bergkirchweih though, it's known nation-wide, whereas the Annafest is smaller. And nicer. With much better beer. And less drunken rowdiness.

Martin, Nuremberg Castle certainly is a wonderful setting for a festival, and given the layout of the moat, there were plenty of corners and places nestling under the walls in which to place the beer stands, plus the seating.

I only visited one pub in Nuremberg itself on this trip. That was Braustüberl Hütt’n, which is just down the road from the castle and virtually opposite the Altstadthof Hausbrauerei; an establishment I have drunk in on previous visits to the city.

Matt, you are correct about beer choice (or lack of it), although places like Hütt’n are bringing in beers from outside Nuremberg.

Erlangernick, it was great to meet up with you as well, and to be guided in the direction of some of the beers with real character. The following day’s trip out into the lovely Franconian countryside was also really good, and I plan to write about it later.

The Fest itself was certainly very popular, although like any event held outdoors, it’s very dependent on the weather. I am trying to get a few local CAMRA members interested in attending next year, as I feel this event is right up their street.

I enjoyed visiting Annafest a couple of years ago, but as I said to you a Maß is rather too much if you want to sample more than a few beers over the course of the day. I would still like to go again though.