On the final day of my visit to Nuremberg I had the choice of either going along to the Fränkisches Bierfest beer festival again, or venturing somewhere further a field. As I had bought an all zones Tages Ticket Plus the previous day, and it being the weekend, the ticket was still valid. It therefore seemed daft not to take advantage of the ticket.

Bamberg was the logical choice as it would have been unforgivable for me not to have visited this beer lovers’ city whilst staying in the region. This would be my fifth visit to this lovely, compact baroque gem of a city, even though it would be a relatively short one. So after checking out of my hotel, leaving my suitcase in one of the left luggage lockers at Nuremberg station, I boarded a train heading off to Bamberg.

After the slow train I’d been on the previous day, it was nice to be on the Regio-Express, which stopped at just a handful of stations. Consequently, some 45 minutes later, the train was puling into Bamberg. After overnight thunder and rain, the sky had started to clear, but it was still quite muggy out. I exited the station and headed into town, with just one destination in mind; the world renowned Schlenkerla Tavern right in the heart of the old city. 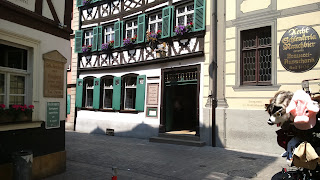 Bamberg was, as expected, busy with tourists, but for some reason there weren’t many of them in Schlenkerla; in fact there was room in the left-hand bar, which being the haunt of regulars and locals, is normally packed. I sat at the end of one of the long tables close to the window, and after attracting the attention of the Kellnerin, ordered myself a Seidla (half litre glass) of Schlenkerla’s famous smoke (Rauch) Märzen beer. One mouthful was sufficient for me to renew my acquaintance with this world classic beer. Coal black in appearance and topped with a delicate white lacy head, but most important of all it had that wonderful smokiness which people either love or hate. Fortunately I love it; as do many other people, not just from within Bamberg, or indeed Franconia, but from all over the world.
Some beer enthusiasts have accused the brewery recently of “dumbing down” the beer, as many first-time drinkers were rumoured to find the characteristic smokiness just too intense. I disagree, and even though it is nearly five years since I last drank the draught version, I found the beer as full of character as ever, with an intense smoky character imparted by the beech wood-kilned malt. Possibly the aroma may not have been as intense as it once was, but the distinctive taste was definitely there.

My intention was to just have the one beer at Schlenkerla before moving on; perhaps out to the nearby suburb of  Wunderburg for some Mahr’s beer, and then to end up at Café Abseits – conveniently close to the station and the train back to Nuremberg. I modified this plan when I noticed, through the open window, the Hotel Alt Ringlein just across the street from where I was sitting. A sign outside indicated that Mahrs Ungespundetes was on sale there, meaning a bus ride out to Wunderburg would not be necessary.

However, as I sat there enjoying my excellent Märzen, I realised it would be a shame just to have the one. Besides, it was lunchtime and with an evening flight home, there would be precious little opportunity to grab some thing to eat later on. Consequently I ordered a dish of roast pork with Knodl (potato dumpling), plus Wirsing (puréed green cabbage-tastes much better than it looks or sounds!), plus of course, another Rauchbier.

It was very pleasant sitting in the taproom of the centuries old Schlenkerla Tavern, watching the world go by through the open window, but also enjoying the timeless atmosphere inside the pub. There were a couple of locals sitting at the Stammtisch. They obviously knew the waitress, as she went and sat with them whilst taking a break for her lunch. There were also two Chinese ladies tucking in to a substantial lunch themselves. They smiled and waved at me, as I took a few general photos.

I could easily have stayed for a third beer, but time was getting on and I wanted to squeeze in a visit to Café Abseits whilst still allowing plenty of time to get back to Nuremberg, retrieve my luggage and then get to the airport. Consequently I made my way back to Bamberg station, and crossed beneath the tracks via the underpass, before making my way to Abseits. It was a similar hot day back in 2013, when my son and I had first visited Bamberg’s premier beer pub, and like then I ended up in the small, shady beer garden behind the pub.
I found myself an empty table and after perusing the substantial beer menu, ordered myself a beer. Huppendorfer Vollbier was my first choice; an amber coloured draught beer, which slipped down really well. I followed it with a bottled Hummel Kellerbier which, although good, was perhaps not quite as enjoyable as the first beer.

Now I don’t know why I didn’t look at the back pages of the beer menu, as it wasn’t until I was getting ready to leave, with the aim of catching the 17:00 train that I saw there were several bottles beers brewed at the world-famous Weyermann Maltings, just a short distance away from the pub. The beers included a Rauchbier, plus a Porter, and it was a shame I missed them. It was also a shame I didn’t get the chance to introduce myself to Gerhard Schoolman, Café Abseits’ proprietor.

I am friends with Gerhard on Facebook, but then so are countless other beer lovers from around the world, so I wouldn't expect him to know me from Adam. I did see him on several occasions, bringing various things down from the kitchen, but he looked rather busy and a little flustered. A better time would perhaps have been early evening, in the pub itself, whist things are still quiet. So there are two things to be done on my next visit; try some of the Weyermann beers, plus say hello and introduce myself to Gerhard Schoolman

I left the pub and walked the short distance back to the station. I had misread the timetable, and the train I’d planned to catch didn’t run on Sundays. I didn’t have too long to wait for one though, and after a 45 minute journey, through the pleasant Franconian countryside, I was back in Nuremberg.

After retrieving my case from the left luggage lockers, I made my way to the airport, arriving in plenty of time to catch my flight. I could probably have stayed for a few more beers at Café Abseits, but it was better to arrive at the airport with plenty of time to spare, than to be stuck somewhere wondering whether I would make the flight or not. And as for Bamberg, it is still as lovely as ever and didn’t appear completely over-run with tourists.
Posted by Paul Bailey at 21:53

Did you get your U?
Should have asked for the Weyermann bottles to take away. (-:

Glad if surprised you managed a table at Schenkerla; it was rammed when we visited mid-week last October. I agree about the Marzen. It tasted just as smoky as I remembered it at Cambridge Beer Fests 15 years ago.

NB Have you ever been to any of the Landbierparadies pubs around Nuremberg ?

That point about dumbing down is interesting. Suspect what's actually happened is that seasoned drinkers have just got used to what, at first, struck them as a jarringly odd flavour in beer. I guess Boak and I drink a couple of bottles every two or three months and we're always struck by how much smokier it is than we remember it being.

Martin, I was pleasantly surprised at how empty Schlenkerla was. This was the first time I’ve managed to get a seat in the room where the beer is dispensed (Bierstübla?), although I’ve sat in the large room on the right – the one which was the old Dominican Priory. I haven’t, as yet been to any of the Landbierparadies pubs, but I’ve read good reports about them.

I’m sure you are right Bailey, about drinkers just becoming used to a distinctive product. The beer certainly tasted sufficiently smoky to me. BTW, you mention that you and Boak enjoy bottles of Schlenkerla from time to time. Presumably you get these via mail-order, but which supplier do you use?

Paul -- most of the UK online retailers carry it. We usually buy from Beer Ritz, Beer Merchants and occasionally Ales by Mail but we've got a few bottles on the way in our latest order from Beer Hawk. (We needed a specific saison only they seem to stock.)

Thanks, Bailey , I'll have a look at these retailers and place an order. It will be good to have a few bottles of Rauchbier in the house.