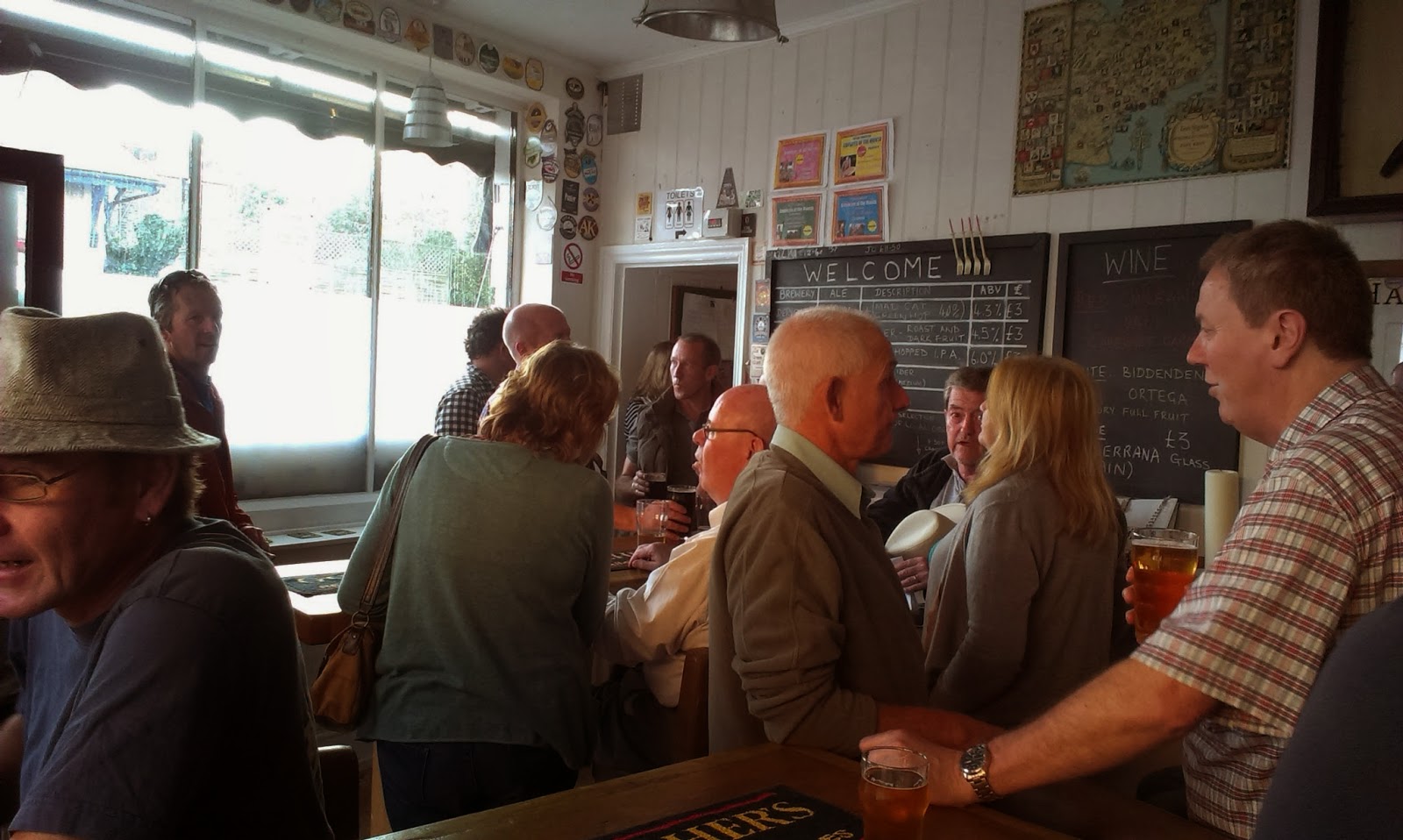 I have a confession to make; until last Friday’s excursion to Thanet, I had never set foot inside a Micro-pub. For someone living in the county where the Micro-pub concept was established, this is not a good thing to admit to, but it is nevertheless a fact. Having now visited, and drunk, in a few I can safely say I’m sold on the idea, but for the benefit of those not familiar with the concept, what exactly is a micro-pub?


According to the Micro-pub Association, which was established in 2012, “A Micro-pub is a small free-house which listens to its customers, mainly serves cask ales, promotes conversation, shuns all forms of electronic entertainment and dabbles in traditional pub snacks”.

The passing of the 2003 Licensing Act, which became effective in 2005, made it much easier to set up a small independent public house, so it is no coincidence that the same year the Butchers Arms Micro-pub  was opened by Martyn Hillier, in Herne, Kent. This original Micro-pub is the winner of numerous CAMRA and other industry awards, and has become the template upon which all subsequent micro-pubs have been based.

In 2009, Martyn gave a presentation to the Campaign for Real Ale AGM, held that year in Eastbourne, showing the simplicity of the 'Micro-pub' model and encouraging other people to follow his lead. It proved to be a catalyst with the opening of the Rat Race Ale House in Hartlepool six months later, and the Just Beer Micro-pub in Newark-on-Trent, which started trading in August 2010. These two were followed soon after by the Conqueror Alehouse in Ramsgate, which opened later the same year.

Since then, there has been a flurry of Micro-pubs opening, and the number now stands at 68! I am pleased to report that 25 of these are in Kent, which can therefore truly proclaim itself as “Home of the Micro-pub”. There may be differences between the pubs; they may or may not have a bar, they might serve beer straight from the cask or through hand pumps, but they are united in one philosophy - a simple pub with the focus on cask beer and conversation for entertainment.

Having been in a few micro-pubs now, I can certainly vouch for them being real community locals, attracting a range of like-minded individuals, drawn from a wide cross-section of the local neighbourhood. All the establishments visited on Friday were places where conversation ruled, or where during less busy times, customers can come and sit and read the paper, or a good novel, whilst enjoying a well-kept pint.

The latter is obviously of high importance, and the fact that all the pubs we visited kept their beer in a temperature-controlled area, and dispensed it straight from the cask, shows a commitment to maintaining the high standards of quality which many of their macro counterparts could do with copying.

The Micropub Association website lists all 68 Micro-pubs in chronological order of their opening, along with brief details of each establishment and links to various reviews plus, where applicable, links to the pub’s own website. The association also offers lots of practical advice for people wanting to open their very own Micro-pub; in fact they say “Open a Micro-pub in your town before somebody else does!”

Footnote: Tonbridge has been promised its very own Micro-pub. Planning permission has been obtained for the conversion of a former tattoo parlour into a Micro-pub, which will be called the Two Pigs.

The Liverpool Pigeon, which is on that list and which opened last year, is about 10 miles south of here; it is the Liverpool CAMRA pub of the year this year. I’ve been several times. Here in Southport, we have the well-established and popular Inn Beer Shop, which has a massive range of bottles that you can drink on site or take away, plus one cask beer. There are also two mini-pubs made out of shops: one from a newsagents and one from a lingerie shop. Both sell real ales along with some bottles, but also wines, spirits and keg/craft beer as well as the cask. None of these is a micropub in the strict sense of the phrase, but they are popular and add to the variety in the town.

A last refuge for CAMRA types to celebrate the death of the pub in the form of it's last dying gasp as pubs become a cottage industry. But at least there is no lager!

A small shopfront full of old white men, defined by what they don't serve rather than what they do.

Last stop before the crematorium!

PY: all of the four local mini-pubs I've been in regularly attract groups of young and not-quite-so-young (30s & 40s) women.

Two of them sell keg lager, and all four serve bottled lager.

As for the colour of the skin of people who use these places, why is that relevant, except to a racist?

“A small shop front full of old white men.” You’ve excelled yourself here py; in one sentence you’ve managed to be ageist, racist and sexist. Not bad going really!

I would be wasting my breath if I was to tell you the micro-pubs we visited last week were full of all sorts of different people, male and female, young and old and anything in between. And as Nev points out, what on earth has the colour of people’s skin got to do with it?

You really have a narrow minded and very jaundiced view of the world, but I will have the last laugh as you too will be old one day, and it will happen much quicker than you think!

But at least theres no lager !

Quite by accident I saw the online Daily Mail article you are referring to, Cookie, and I wonder by what strange quirk of logic you deduce that the pub customers “appear very middle class”? They all look like perfectly normal members of the human race to me. Why this obsession with trying to pigeon hole people?

I really don’t know where people like you and py are coming from on this. I wrote an article about micro-pubs, and the very welcome increase in their numbers, only for you and your trolling mate to turn the discussion on its head by bringing in totally irrelevant matters of age, gender and ethnicity.

If you don’t like micro-pubs then don’t go in them. End of story! I don’t like disco bars or pubs packed full of football supporters, so I avoid them. I don’t write snide comments about them, or insist they alter their customer base to suit people like me.

That's what I do, Paulo, steer clear of such dumps.

But considering the narrow appeal of these places, enjoy them whilst enough old white middle class people use 'em, but don't be claiming they are assets of community value when they shut eh?

If Thursday's election results are anything to go by, there might be a lot more UKippers than people think!

More to the point, there was nothing terrible about the beer I drank the other week. Cool, fresh and well-conditioned; Pale Ales, IPA's, Porters and Green Hop Ales, so what's not to like? Depends if you're constrained by blind prejudice and a totally closed mind, I suppose.