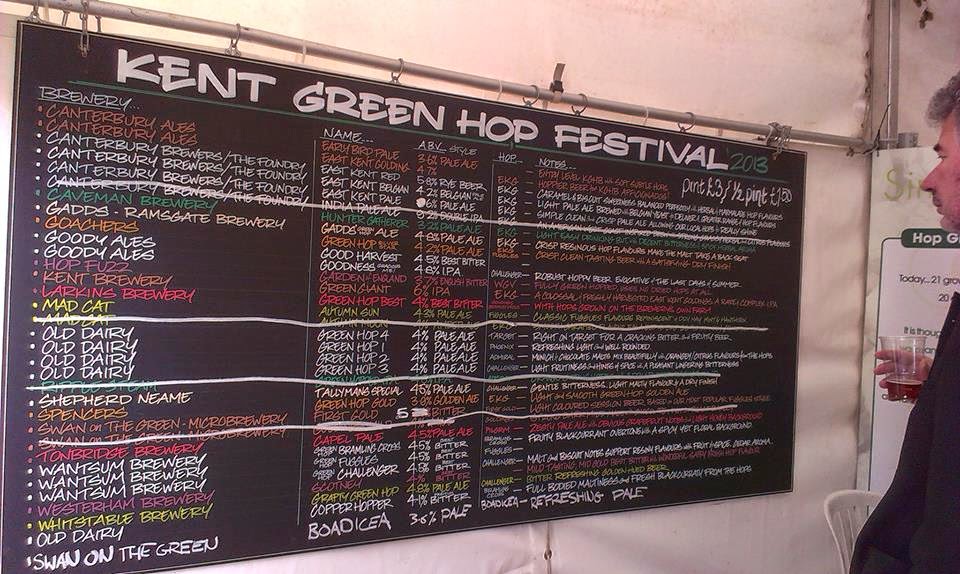 Last December I wrote about a visit a friend and I made to the cathedral city of Canterbury. In a post entitled “A Cold Wet Day in Canterbury”, I described how on a bleak, early December day, we had wandered from pub to pub trying to find refuge from the cold, wet and windy conditions outside. Nine months on and I found myself back in the city, this time under far more clement weather conditions, in order to visit the “Canterbury Food & Drink Festival”, which was also hosting the launch of “Kent Green Hop Fortnight”.

I like Canterbury, and during my formative years was a frequent visitor to the city. Back then my family lived in East Kent; initially just outside Ashford, and then, whilst I was between the ages of 14 and 19, in a small village called Brook. My parents liked to shop in Canterbury, and as a child I enjoyed visiting a store called Barrett’s, which had an excellent toy department. Later, as a teenager, my friends and I would cycle over to nearby Wye, from where we could leave our bikes at the railway station, and catch the train for the short journey (three stops), to Canterbury. We would do bit of shopping, have a bite to eat in one of the many cafés, and then go and cheer on the local Speedway team, Canterbury Crusaders. By the time I was in my late teens, Canterbury was a good place to visit for rock concerts or theatrical performances. Being a university city there was a thriving cultural scene; something that was definitely missing in Ashford.  40 years on and Canterbury is home to two universities; the original 1960's University of Kent having been joined in more recent times by Canterbury Christ Church University. The large student population, combined with the obvious tourist appeal of Canterbury, continues to contribute to the vibrancy and appeal of the city, and a visit there is still something to look forward to.

Canterbury is towards the opposite end of the county from where I now live, but is still quite easily reached by train, with a journey time of just over an hour from Tonbridge. Last Friday three of us jumped on the train for what was the opening day of the Food & Drink Festival. It was also the first day that the Green Hopped Beers, produced by the majority of Kent’s brewers, were all on sale together in one location. The event was held in the city’s Dane John Gardens, an attractive park laid out just below the ramparts of Canterbury’s ancient city walls. This was the first time I had been back to Dane John in over 30 years; not in fact since the Kent Beer Festival had moved from this city centre location to its current home at Merton Farm. 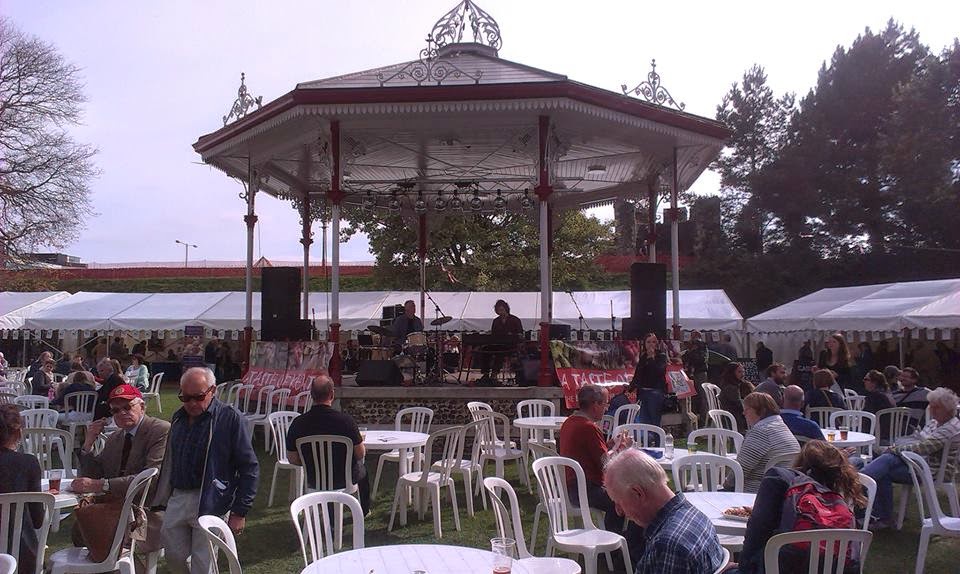 As I stated earlier, it was a bright sunny day when we arrived in Canterbury; sunglasses weather in fact, but there was still a bit of a chilly easterly wind blowing, which kept the temperatures down slightly. Still, this was only to be expected at this time of the year, and the main thing was the weather stayed dry all day. After a stroll up through the pedestrianised High Street, and a short walk along the city wall, we arrived to find Dane John Gardens already packed with visitors, not all there, of course, to sample the Green Hopped Ales (although many undoubtedly were), but people keen to try some of the tempting offerings from the huge array of produce stalls which ringed the periphery, as well as the centre of the park. These ranged from things like local cheeses, seafood, home-baked pies, preserves, hand-made chocolates, to more exotic offerings such as venison burgers. There were stalls offering more substantial, “meal-size” portions of things like curry (both Indian and Thai), plus paella (I partook of the latter, and very tasty and filling it was too!). There were also several stalls selling locally produced Kentish cider, fruit juices and even things like flavoured vodkas and other liqueurs.

My friends and I though were primarily there for the Green Hopped Beers, and these were housed in a marquee at the far end of the gardens. Like at most CAMRA festivals, the beers were served direct from the cask, by an army of volunteers drawn mainly from the various brewers whose wares were on offer. I believe I am correct in stating there was a beer from every Kentish brewer that had produced one. Some breweries had produced two or three, and Old Dairy had actually brewed five different types! 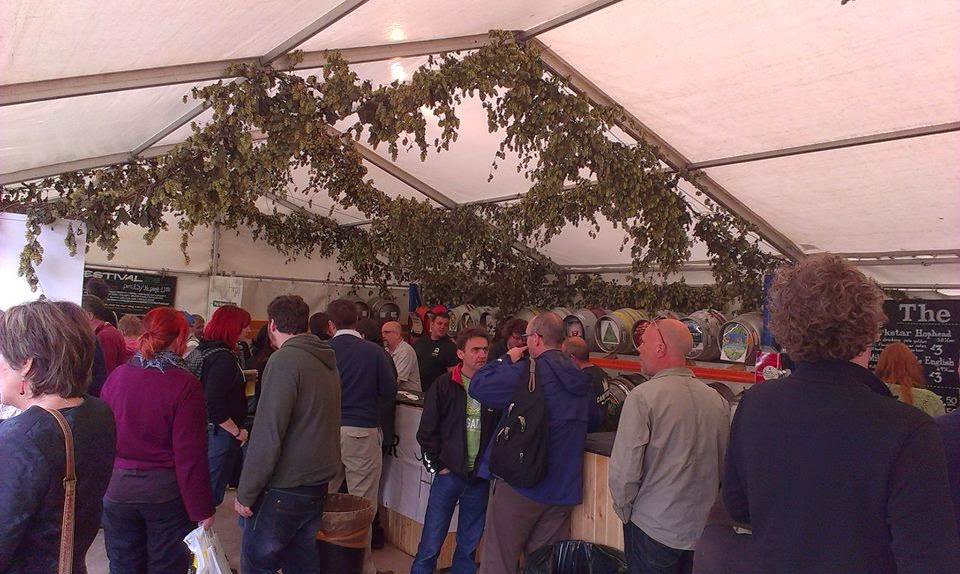 I didn’t try them all; nor did I try one from every brewer, but I did sample quite a decent cross range of different brews, some obviously better than others, but none that were too astringent or otherwise unbalanced. Prior to our visit most of us had downloaded the online beer list, which came with accompanying tasting notes, plus details of which hop variety was used for each particular brew. I’m not going to be geeky and start listing them here, but if you really want to know (and many of these beers will still be available over the next week or so in local pubs), you can find out by clicking on the following link.

We spent a very pleasant afternoon sitting in front of the bandstand, soaking up the autumn sunshine whilst listening to a couple of the live acts which made up the varied schedule of musical entertainment at the festival. We made regular forays to the beer tent, and also to some of the food stalls, slowly working our way through some of the goodies on offer. My favourite beer was Gadd’s Green Hop Ale from Ramsgate Brewery, followed by Green Hop No. 2 from Old Dairy, Green Hop Silver Star from Goachers and Green Hop Best from Larkins. Also worthy of a mention was East Kent Belgian from Canterbury Brewers, a Belgian-style pale ale, hopped with East Kent Goldings and brewed with Belgian yeast. The latter ingredient certainly gave a distinct Belgian flavour to the beer and married well with the local hops. It was the first cask to sell out, so it must have proved popular with punters.

We departed some time before 5 o’clock. The sun had disappeared behind the trees by then, and it was starting to get chilly, so we headed into the city and the warmth of a couple of pubs. The Buttermarket, opposite the imposing cathedral gate, gave us the chance to sample a beer from the newly resurrected Truman’s Brewery (US Pale 4.6%), whilst later on the Foundry Brewpub, (home of Canterbury Brewers), gave us the chance to try another Green Hop Ale, plus the company’s excellent Street Light Porter.

Many of the Facebook and Twitter feeds over the weekend confirmed the success of the Food & Drink Festival, and that of the Green Hopped Beers. By Sunday, many of them  had run out. For me this proved to be an excellent festival and one I will definitely want to revisit next year. I am sure most of my friends will want to do the same as well.

Can anyone tell me why I had to replace the photos on this post, after they mysteriously disappeared?

This is the second time this has happened; on both occasions the photos were originally synced from my phone to my Facebook page. Is this a fault with Blogger? Puzzled!!

It's happened again - the photo's have vanished from the post!! Peculiar or what?