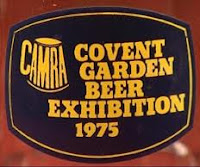 Boak and Bailey have recently been running a highly entertaining and informative series of posts on their excellent blog about the early days of CAMRA, which have included articles about the legendary Becky's Dive Bar, the Great Air Pressure Schism, How CAMRA got its name, and  The origins of the term "Real Ale.


However, with no disrespect to these two fine and highly regarded bloggers, I believe most of the information used in their researches must have come via other sources, simply because, as far as I am aware, neither Boak or Bailey are old enough to have experienced these places and events personally! I on the other hand, whilst not quite in on the action from the very start, do remember the controversy surrounding Truman’s Tap Bitter, because of the air pressure system ("County Air Pump"), used to dispense it. I can also recall a couple of memorable visits to Becky's Dive Bar in the mid 1970's. My most memorable experience though from those early days of  CAMRA was my visit to the Campaign's first major beer festival.

This pioneering event was actually billed as a “beer exhibition”, rather than a beer festival. It was called the Covent Garden Beer Exhibition, and  took place during September 1975. It was held in the old Flower Market in London's Covent Garden, and was the first beer festival I ever attended. The Flower Market was empty at the time, following the relocation of London's main Fruit and Vegetable market to Nine Elms. The recently vacated historic buildings were under the threat of demolition; indeed, the whole of the Covent Garden area had been earmarked for redevelopment. Fortunately this threat was averted,  thanks, in no small part to the efforts of the Covent Garden Community Association. This organisation played a key role in securing the venue on CAMRA's behalf, and it must be said that the success of the exhibition went a long way in persuading the relevant authorities that this historic site was worth preserving. One only has to take a trip to Covent Garden today, to see just how popular the area is with shoppers and tourists.

The Covent Garden Beer Exhibition was not the first such event organised by CAMRA; that honour belongs to the Cambridge Branch who ran a pioneering festival in 1974. However, the Beer Exhibition, held at Covent Garden, by far exceeded the expectations of its organisers, and set the seal of approval on subsequent events. These, of course, culminated in the hugely successful, annual Great British Beer Festival. I have since discovered that the Covent Garden Exhibition attracted over 40,000 people in total, one of whom was me!

To return to the story; I attended the Exhibition with a group of friends for one of the lunchtime sessions. We had to queue to get in, but the numbers of people present were not so great as to make things uncomfortable inside the hall. It was certainly an eye-opener, so far as I was concerned. I had never seen so many beers on sale in one place. They were all dispensed by gravity, direct from casks, stillaged on the old flower stalls, although I remember that Samuel Smiths had fitted special "cask pumps" to their casks. These were miniature hand pumps, whose purpose was to ensure the beer was dispensed with the tight creamy head that Yorkshiremen are so fanatical about!

It is difficult now to recall exactly which beers I sampled, but I do remember enjoying beers from the now sadly defunct Yorkshire Clubs Brewery. All the beers I tried that day were new to me, and it was very encouraging to be in the company of so many like-minded people, all enjoying decent ale in pleasant, if somewhat basic surroundings.

My companions and I enjoyed ourselves so much that we decided to attend the following evening. When we arrived though, we found the queue stretching right round the building, and were told that we stood virtually no chance of getting in. Reluctantly, we adjourned to the nearby Marquis of Anglesea, and spent the evening enjoying the Youngs beers on sale there. (At the time the Marquis was one of only a handful of pubs in Central London belonging to this once renowned Wandsworth Brewery.)

Halfway through the evening, one of our party nipped out to see if the crowd situation at the exhibition had improved. He returned to advise us that, if anything, things had got worse. By this time we were well stuck into the Youngs, so we decided to stay put.  Looking back this was a great pity, as I would have liked to have attended a further session, and tried a few more different ales. Oh well, at least I can say I was there and, as proof, I still have my souvenir glass which clearly states “CAMRA Covent Garden Beer Exhibition” - a valuable and much treasured memento of this pioneering event!

There are some excellent colour photographs of the event, taken by David A.L. Davies, on the Redbubble website,  I have not reproduced them on this post, as they are copyright.

I've got my dad's Covent Garden glass stashed in the cupboard. I can't normally be bothered with beer festival glasses but I'm hanging on to that one.

I was there! Confess to my dad having broken my glass. Yorkshire Clubs... ah, happy memories!

I normally can't be bothered with beer festival glasses either, but that was my first festival, and hence my first glass. It's safely packed away now, up in the loft!

Paul -- you're right, we're both in our early thirties, so can't speak from personal experience on anything beer-related occuring before about 1995. (Though I do have vivid childhood memories of my Dad's homebrewing kit and the beer he made for the Royal Wedding in 1981...)