A Quiet Couple of Weeks 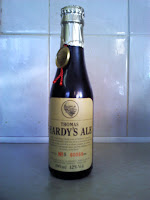 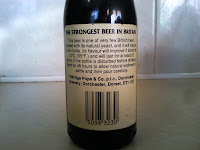 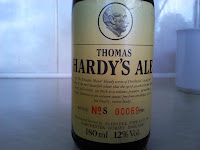 Not a lot to report at the moment on the beer and pub front, as I've been busy sorting out other matters. Most of these things were boring, time consuming and expensive, especially having to run my car back to the garage for the second time in a week to sort out a nagging fault, but last weekend at least gave the family a chance to relax and celebrate son Matthew's 21st birthday. We spent the day round at the house of a couple of good friends, one of whom is Matthew's Godmother. Janis is also a fully trained chef and laid on a superb roast dinner in honour of the occasion.

Earlier that day I unearthed a 1991 vintage bottle of Thomas Hardy Ale that was lurking at the back of the cupboard. 1991 was the year Matthew was born, and I bought the Thomas Hardy Ale specifically to lay down and keep until he turned 21. It is an individually numbered bottle, and was brewed by the original creators of the beer, Eldridge Pope at their now sadly closed Dorchester brewery. We were going to open it round at our friends, but after we'd given some bottles of St Austell Proper Job a bit of a caning, and then moved on to some rather potent, but very quaffable, Sicilian red wine, thought we really wouldn't  be doing this 21 year old vintage ale justice. Hardy's Ale has therefore gone back in the cupboard to be opened on another suitable occasion (probably Christmas).

During the week I made a couple of forays into our local Wetherspoons, where I had some very good Exmoor Gold, (I'd forgotten just how good a beer this pioneering Golden Ale is), plus some equally enjoyable Brewster's Andromeda.

Tomorrow sees our local CAMRA Branch's AGM, which takes place this year at the Chequers in Sevenoaks. Now I'm no longer on the committee I can watch things from the sidelines, but still continue o support the branch by going along to socials and helping out with activities such as the Spa Valley Railway and SIBA Beer Festivals. It has been quite a successful year for the branch as a whole, so we are all looking forward to the coming year. It will be interesting to see what takes place at the meeting, and to learn what plans our chairman and committee have for the forthcoming year.

In a couple of week's time the round of Christmas meals and drinks will be starting in earnest. Unlike last Christmas, when I was unable to drink, I am looking forward to sampling the many beery delights that I have  been stockpiling these last few months. As well as all these bottles, I may well decide to treat myself to a mini-pin of one of my favourite winter beers - Larkins Porter. I haven't tried any of  this year's offering yet, but I'm certain it will be every bit as good as in previous years.

Well that's all for now. I've got a bit more research to carry out before I publish my final article on Tonbridge's pubs and I'm also keen to continue with the Classic, Basic Unspoilt Pubs of Great Britain theme.
Posted by Paul Bailey at 22:20