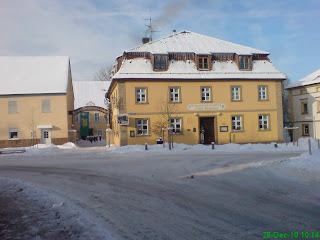 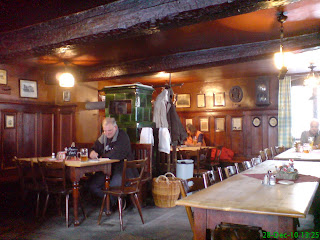 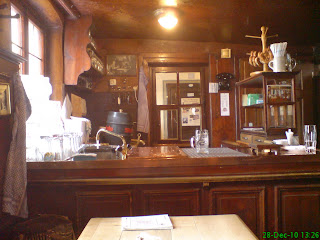 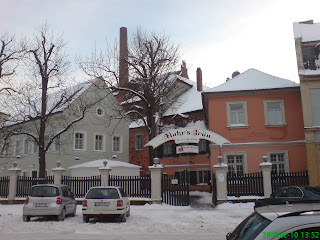 Apart from the obvious places, such as Mahrs Braeu and Schlenkerla, I hadn't made any definite plans as to where else to visit during my stay in Bamberg, but as the first full day of my trip dawned cold and bright, a ride out to one of the surrounding villages seemed a good idea. My hotel was literally a stone's throw from the Central Bus Station, so after breakfast I availed myself of an all day ticket and jumped on a bus out to Memmelsdorf.

The latter is a large village, a few kilometres to the east of Bamberg. It is home to two brew-pubs, which of course was the main reason for my visit. I only really had time to visit one pub, so I chose the largest and the one with the widest range of beers. Drei Kronen was a very pleasant, solid-looking, yellow-painted establishment, with a number of rooms leading off from the central entrance hall. I entered the one straight ahead, and although all the tables were laid out for diners, the waitress was quite happy to serve me a beer. I selected the Stoeffla, which although described as a Kellerrauchbier, didn't taste all that smoky to me. It was pleasant enough though, but whilst tempted to stay for another, I needed to get back to Bamberg for my planned luchtime visit to Mahrs Braeu.

Two bus rides therefore saw me alighting in the suburb of Wunderburg, from where it was a short walk along to Mahrs. This excellent brewery tap is a firm favourite with visitors from Britain, and stepping inside it's not difficult to understand why. I made my way to the right hand room, complete with its low beamed ceilings and dark-stained wood panelled walls. There is also a traditional tiled stove, although the latter did not appear to be lit. To top this, the beer is served direct from a barrel perched behind the serving area.

On our previous visit, back in the summer, we had sat out in the small, shady beer garden, only venturing inside to use the toilets, so being able to soak up the traditional atmosphere inside the pub was a real treat. I was joined at my table by two visitors from outside the city. They spoke very little English, but I was able to converse with them in their native tongue without too much difficulty. To drink I enjoyed an Ungespundetes, plus the stronger Heller Bock (6.5%); both were in bottled form. For my lunch I had the local version of Leberkaes, which is called Fleischkaesse, with Spiegel Ei and Kartoffelsalat, and it was my enquiring about this dish that had brought me into conversation with the locals.

Before leaving the brewery I bought a selection of bottles from the brewery office and then caught the bus back into town. Later that evening I made the stiff climb up the Kaulberg to Greifenklau, which is the smallest of Bamberg's breweries.Greifenklau was the nearest brewery tap to the apartment we stayed in last summer, and on several occasions we ate there, in the shady beer garden at the rear of the pub. Unfortunately the room I chose this time turned out to be the wrong one. There were two quite noisy family groups inside, both of whom had fractious and badly behaved children with them. This was something new to me, as most German children I'd come across in the past seemed to exhibit exemplary behaviour. I therefore decided just to have the one drink there and eat somewhere else. The unfiltered Zwicklbier was very tasty though, so it was a shame to have to leave.

I made my way back down into the Altstadt and found my way through the narrow streets to Klosterbraeu. This is probably the most picturesque of Bamberg's breweries, although I have to agree with such illustrious writers as Ron Pattison and Gazza Prescott that the beers leave a lot to be desired. This aside I was hungry by now, so managed to grab myself a seat in the cosy restaurant. I ordered Schweinebraten (roast pork) with Kloss (dumpling) and Wirsing (purred cabbage). To wash my meal down I had a glass of Schwaerzla, a dark beer with an unpleasant phenolic taste, which reinforces the comments I've written above. I therefore just had the one, paid my bill and left.

On the way back I popped into Schlenkerla where I was able to sample the strong Christmas Doppelbock called Eiche. This dark 8.0% beer is brewed using malt smoked over oak wood, rather than the usual beechwood. It was very moreish, but at this strength I thought it unwise to have more than one! So ended my first full, and somewhat beery day in Bamberg.
Posted by Paul Bailey at 19:59

Cross the street from Mahr's to Keesmann. They don't do fancy smoked beer but their Pils is a thing of beauty.

We visited Keesman last time, Barm. Unfortunately there wasn't sufficient time for a return visit on this occasion. I do remember the Pils as being good though!

Excellent reportage Mr Bailey. Quite fancy a bit of that myself. Your walking partner obviously missed you whilst you were gone, if the state of him one night last week in the P&J was anything to go by. He he.
@HiggsBoson1

I'm certain my walking partner would have enjoyed himself in Bamberg, Mr HiggsBosun.