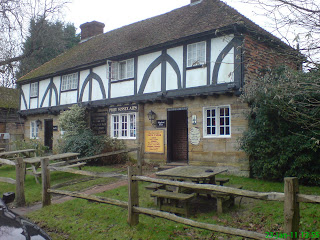 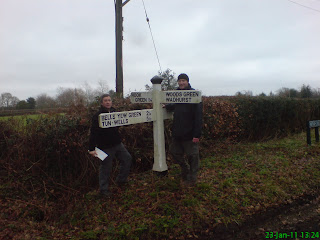 On Sunday I took my promised walk out to complete the last of my surveys for the 2012 Good Beer Guide. It always amazes me that surveying has to be done so early in the year, but when you take into account the fact that the Guide is launched in October, in time for the Christmas book trade, then it begins to make sense.

The pub I visited was the Elephant's Head, situated in the tiny hamlet of Hook Green, close to Lamberhurst on the Kent-Sussex border. The pub is virtually impossible to reach using public transport, so the only alternative was to walk there, at least part of the way!

I set off from Tonbridge, in the company of two friends, catching the train as far as Wadhurst. From here we followed the myriad of minor roads and back lanes, through the rolling High Weald landscape of grassy fields and small tracts of woodland. Along the way we passed through the small, isolated settlement of Woods Green, eventually reaching our destination after an hour and a half's walking.

The pub was packed when we arrived, and we were lucky to get a seat, but after our walk we were glad of the chance to take the weight off our feet and enjoy a well-earned pint or two. The Elephant's Head is a Harveys tied pub which dates back to the late 15th Century, although the building has only been a pub since 1768! As befits an old building there are walls of bare sandstone and brick, a wealth of oak beams and a large open fireplace. There is a central serving area, with a modern conservatory to the rear, but we sat in a small alcoved area adjacent to the main entrance.

Harveys Best, Armada and Old Ale were the beers on offer; the Old being particularly good. Unfortunately the same could not be said of the Armada, and one friend ended up having to return his pint. It was promptly replaced with Best Bitter and so, this grip aside, we couldn't really fault the pub. Sunday lunchtime is obviously the busiest time, with the carvery proving extremely popular.

Looking around though we noticed that most of the diners were either drinking wine or soft drinks. The latter is perhaps understandable, given the fact that most of them had arrived at the pub by four-wheeled transport, but where were the beer drinkers? As I mentioned earlier, there were three cask beers on offer, and whilst two of them were fine, one definitely wasn't. When it came to asking the questions for the survey, the staff told us that they sometimes close early on Monday and Tuesday evenings, especially when there are few customers. All this points to a heavy reliance on the food rather than the drink trade, but if that is the price for the survival of rural gems, such as the Elephant's Head, then perhaps that is no bad thing!
Posted by Paul Bailey at 18:01

Looks lovely. Is the poor pint of Armada likely to adversely affect its chances of going in the 2012 GBG?

Hopefully not, but we'll have to mention it. In the end it will depend on other member's experiences with the beer at the pub as well.