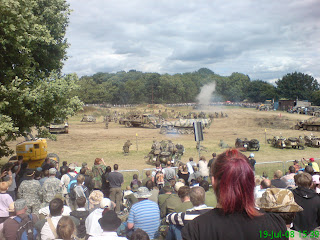 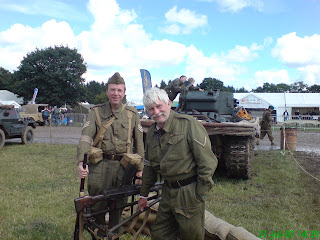 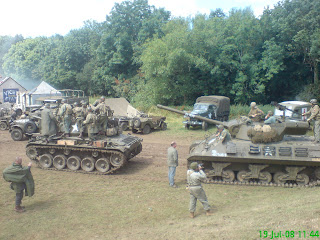 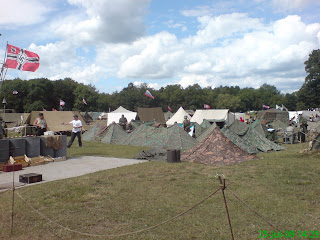 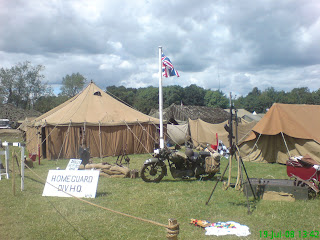 No, not the lengthy novel by Count Leo Tolstoy, but the world's largest military vehicle and World War II re-enactment event. Held at the former Whitbread Hop Farm, over at nearby Paddock Wood, the "War & Peace Show" attracts thousands of visitors, and exhibitors from all over the world.

I was in Paddock Wood for most of last week, taking part in a First Aid Course, and throughout the week the numbers of vintage military vehicles driving up and down the High Street, and the numbers of uniformed personnel dressed in appropriate military costume, steadily increased. Some friends of mine, most of whom are members of Maidstone & Mid-Kent CAMRA, belong to one such re-enactment society; in their case the Home Guard. Every year they set up camp, alongside hundreds of other exhibitors, over at the Hop Farm, and spend the week under canvas living the sort of life that servicemen would have done sixty or so years ago, (without the danger from real bombs and bullets of course).

My wife thinks it's all a bit sad, but they enjoy it and they're not doing anyone any harm. In the case of those enthusiasts who turn up with a fully restored Tiger or T-34 tank, then it really is an example of "boys and their toys"! My son likes going to the show though, so this year like several others before, we joined the thousands of visitors thronging the Hop Farm on a sunny and very warm Saturday. We watched a couple of re-enactments taking place in the large arena at the top of the farm. The gun shots and explosions were both noisy and realistic, as were the battle scenes that were taking place.

Afterwards we wandered up and down the aisles perusing the dozens of stalls selling everything from army surplus to spare parts for your 1945 Willy's Jeep, plus everything in between. There were stall holders from all over Europe, and even a few places beyond. We dropped in on the Maidstone Home Guard re-enactment group, knowing that they usually have a couple of casks of decent ale tapped in their mess-tent. Unfortunately we caught them at a busy time, and they were unable to break off from guard duty (collecting on behalf of the RAF Benevolent Fund) to stop an offer us a beer. No problem we thought, we'll check out the beer tent, but not holding out too much hope of a decent pint. Sure enough there was the usual fizzy rubbish on sale - Fosters, John Smiths and the like. Not wishing to lower my standards, despite a raging thirst, I headed for the nearby Vegetarian Stall which I remembered last year was selling bottled Belgian beers. This year a small blackboard next to the stand was advertising the presence of "real ale". Not seeing much evidence of this on the stall itself I made further enquiries and was shown to an adjoining display of Bottle-Conditioned beers, specially brewed for the event under their own Bi-Veg label. I chose the 3 Strikes London Chocolate Porter, which at 5% abv, was just right. The bottle was nicely chilled, and although I had to pour it into a plastic glass, it slipped down a treat. £3.30 for a 500ml, hand-crafted BCA at a show like this wasn't bad. Unfortunately I wasn't able to ascertain who had brewed this interesting range of beer, which also included an Organic Pilsner and an IPA, but the beer I had was outstandingly good.

All this set me thinking, why do us Brits put up with such appaling mass-swill at these sort of events? Surely there is room for a few more entrepeneurs here, like the Bi-Veg crew, to offer something different and more distinctive. I can't imagine shows and events taking place in Germany, for example, without a decent drop of local beer on tap, so why not here?
Posted by Paul Bailey at 19:28

Paul-didn't go to War and Peace, but were entertained by a fleet of old military bikes passing through Horsmonden on Friday, during our farmers market. The Hop Farm management is notorious for not sourcing food from Kent-looks like the same attitude goes for the beer as well.They are on record saying that Kent farmers and growers couldn't organise a piss up in a brewery-funny that.Mind you, most big events seem to follow this route.
Talking of BCAs, Westerham's Viceroy IPA hits the spot. Its tied in with the National Trust, which is where I had it;I don't know if it is generally available.