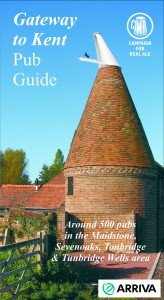 I had thought that there wasn't much to post about at the moment, but on reflection there's been quite a bit happening behind the scenes. Had a quiet weekend after the rather hectic one the week before. Attended a CAMRA committee meeting last night, held at the Sennockian - Wetherspoons outlet in Sevenoaks. The pub was packed, mainly with youngsters celebrating the end of their exams, but looking at some of the girls in particular. we had to wonder how many of them were of legal drinking age! Having said that, there was no trouble and no real signs of over-intoxication.

The meeting went on longer than intended, but we had a lot of business to get through. It's been an exciting time for the West Kent Branch with the publication of our new "Gateway to Kent" pub guide. Produced in conjunction with our neighbours from Maidstone & Mid-Kent CAMRA, the guide lists 500 real ale pubs across the region, with dozens of full-colour photographs. The guide is not just aimed at CAMRA members, but at the many tourists that visit the area - hence the name "Gateway to Kent".

To assist with this aim, there are articles on walking and cycling in the area - which happen to take in a choice selection of good pubs. Another article concentrates on travelling to the pub by bus or train, plus of course the usual campaigning articles about CAMRA, real ale and real pubs. At just £4.99 it represents terrific value for money.

My contribution to the guide was rather modest; consisting of carrying out some pub surveys and writing a couple of articles, but after the hard work put in by the editorial team and the guide committee, the equally hard task of selling the guide now has to be undertaken. Some members are off to Canterbury this coming weekend, where the 35th Kent Beer Festival is taking place. I will be visiting the Spa Valley Railway, in Tunbridge Wells, to try and sell some copies to this preserved Heritage Railway. That's apart from getting on with decorating the spare room, and finishing the preparation for our new patio - you know, all the domestic, but very necessary stuff that still needs doing!

By the way, copies of the guide will be available from CAMRA Headquarters, and will be on sale at the Great British Beer Festival. Copies can also be ordered through the branch.
Posted by Paul Bailey at 20:30