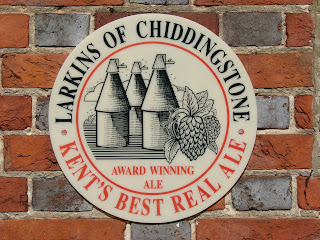 I nipped over to Larkins Brewery yesterday. It's only a short drive from where I work and I wanted to deliver in person the brewery's Trade Tickets for the Great British Beer Festival. Owner and brewer, Bob Dockerty was pleased with the tickets, but doubts he'll be able to spare the time to go. He told me that Larkins have just recorded their best June ever in terms of beer sales, and on top of the pub trade he has been kept busy supplying local beer festivals. The recent SIBA Festival, held in Tonbridge featured four of the company's beers, and Mick the drayman had been over to Canterbury the day before, delivering beer to the Kent Festival.

It is worth recording that this is the 35th such festival to take place under this name, making the Kent Beer Festival the second oldest such event in the country. As far as I am aware, Gill Keay has been the organiser for all 35 festivals, which is a pretty remarkable achievement! Unfortunately, due to family commitments, I will be unable to attend, but the festival, which is held on a farm just outside Canterbury, is one of the most popular and best attended beer bashes in the calendar.

Larkins will also be supplying their beer to the Great British Beer Festival; this year it is their Traditional Ale that has been selected. This 3.4% session beer packs in a taste way above its modest gravity. Bob poured me a pint which I enjoyed whilst we sat and chatted. He has recommenced growing his own hops; the harvest will not be particularly large this season as this is the first year that the bines will have produced a crop. The dry weather has not helped, and Bob told me he was out watering the hop garden the previous evening - by hand!

I love calling in at the brewery, as it is such a laid-back, easy going place. Office Manager, Guy's dog, Humphrey can often be found curled up asleep on a chair in the office, whilst Bob's desk always seems to be buried beneath a pile of well-thumbed Morning Advertisers and other such publications. Being a warm day when I visited, Bob had the rear door of the brewery open, affording a view right across the valley of the aptly named River Eden. This truly is a rural idyll if ever there was one.

Larkins, unfortunately, do not have a website, but the CAMRA Good Beer Guide gives full details of their range of beers. As they carry out their own distribution and do not use wholesalers, their beers are restricted to within a thirty mile radius of the brewery. This means you will have to visit this very pleasant corner of the Garden of England if you want to try them then. If I have tempted any of you, then drop me an e-mail and we can meet up for a pint or two of "Kent's Best Real Ale"!
Posted by Paul Bailey at 21:01

I visited Larkins Brewery last Thursday (29th) - just in passing - and was shown true courtesy by a gentleman who was not bearded Bob (Mick?). He gave me a pint of Traditional - which was wonderful - and the Larkins glaas, too.What a great advert for a fine brewery - only known by name by me, previously!
Dave Woodhead