After being disappointed last week, in my quest for some Harvey’s Old, this week’s foray into the border country between Kent and Sussex proved a lot more successful. Son Matthew’s car is off the road at the moment, due to a broken rear suspension coil.

We’re pretty certain that the damage has been caused by the “traffic calming” speed bumps that have been a feature of the roads around Bailey Towers for as long as I can remember, and we do question the need for these double-sided ramps, given that traffic normally progresses slowly, given the number of parked cars on both sides of the road.

The long and the short of it was that Matthew asked if I could run him over to Tunbridge Wells to pick up some shopping – a request I was happy to oblige with, seeing as there were some DIY items I needed to buy, as well. An idea had already formed in my mind that once the shopping was complete, we could go in search of Harvey’s Old, by taking a drive out to Hook Green. 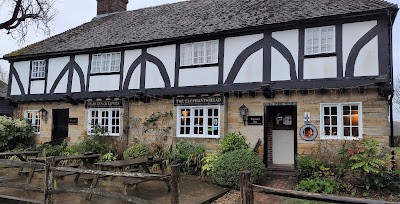 The latter is a tiny hamlet on the B2169 road, between Lamberhurst and Tunbridge Wells, and is home to the Elephant’s Head, a fine old Harvey’s pub of many years’ standing. If anywhere was likely to have Old Ale on sale, then this pub would be the place. A visit to the Elephant’s Head would also allow me to renew my acquaintance with a pub that I haven’t been in for a decade or more. 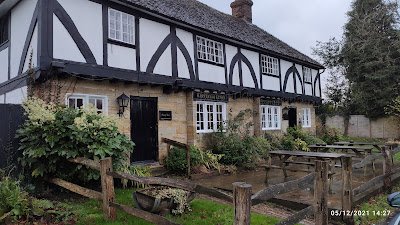 There’s a reason for that, and it’s the relative remoteness of Hook Green and the difficulty of getting there by public transport. I’d arrived on foot for my last visit, after walking to the pub across country, with a couple of friends, from Wadhurst station. Sunday was different – I had the car, and as I would just be having the one pint, driving was the way to go. 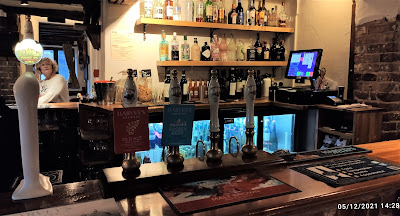 We witnessed a bit of drama on the way, running into a large number of police vehicles and even more PCs on foot, after cutting through from Tunbridge Wells’ industrial estate towards Pembury. We later found out a murder had taken place in the vicinity, following a disturbance in the early hours of Sunday morning. It isn’t perhaps the nicest part of Tunbridge Wells, but back in the late 1980’s, I worked just down the road from where the incident occurred, and it never struck me as being that bad. 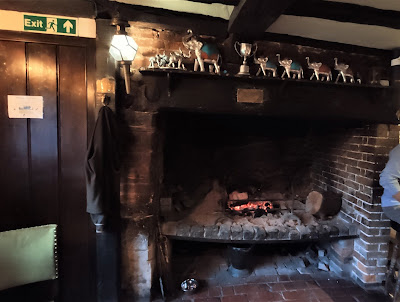 We carried on towards Pembury, and then picked up the A21 towards Hastings. Turning off, just passed Lamberhurst, we were soon pulling into the car park of the Elephant’s Head, after passing two other pubs on the way. I was pleased to see the Brown Trout on the edge of Lamberhurst was still open, along with the Vineyard at Lamberhurst Down. The latter was formerly known as the Swan but changed its name due to the proximity of Lamberhurst Vineyards. The pub is part of the Elite Pubs group, which probably tells you all you need to know.

It was raining when we arrived, but not hard enough to deter me from taking a few photos of the pub’s attractive exterior. It is a half-timbered, former Wealden Farmhouse, with the lower half constructed out of large and perfectly cut, blocks of local sandstone. When I first knew the place, it was a free house belonging to the nearby Bayham Estate. Today, of course the pub is tied to Harvey’s, although I’m not sure when they acquired it. 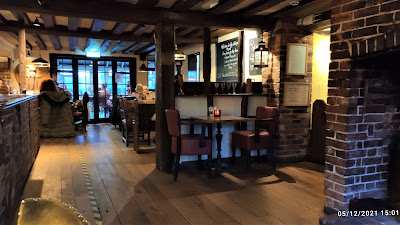 Back in the days when the estate owned the Elephant’s Head, it was about as traditional as you can get, with bare stone walls, flagstone floors and a public and saloon bar. I cycled there from Paddock Wood, for my first visit, which must have been in the very early 1980’s, when I was living in Maidstone.

The bars were eventually knocked into one, and some other modifications made to the internal layout, but it remained a fine old country pub. Harvey’s added a conservatory at the rear, which provided some much-needed space particularly for diners, but apart from that they left the pub pretty much as it was. 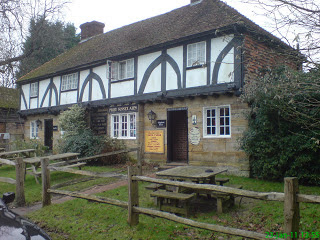 And that is how Matthew and I found it on Sunday afternoon. Even better, stepping inside was as if I had never been away, with that cosy and comfortable feel, instantly recognisable. Looking around the pub, it seemed reasonably busy, but nowhere near as packed as I feared it might have been, on a Sunday afternoon. Perhaps all those people who should have been supporting their local pubs, were the ones causing the major traffic congestion on the North Farm industrial estate.

After that quick scan of the interior, my eyes fixated on the bar top, where the welcome sight of the red pump-clip, for Harvey’s XXXX Old Ale greeted me, and gladdened my heart. I ordered myself a pint, whilst Matthew went for something cold and fizzy – Amstel, it said on the font, but the last authentic Amsterdam-brewed beer of that name, must have been the stuff I was drinking, back in the mid-70’s. 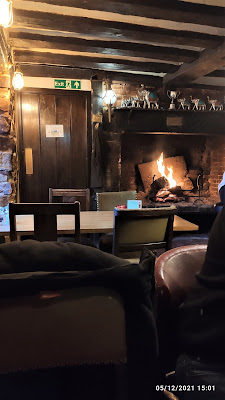 The barmaid asked if we would be eating – an easy assumption to make, especially on a Sunday afternoon, but we weren’t the only ones “just here for the beer,” as we soon got talking to a couple, sitting at the bar, but round the corner, adjacent to the smouldering open fire, with its unusual, raised hearth. “Nice and welcoming, when you first come in, but it quickly becomes too warm, and you have to move away,” was their opening remark. Asking how I knew the Elephant’s Head, I informed them that I had worked for a company in nearby Lamberhurst, back in the late 1980’s. It turned out they lived in the village and had walked to the pub across the fields – a sensible thing to do in my book.

They had moved to Lamberhurst, from London, and lived up the hill, in the old part of the village, and a couple of doors down from the closed Horse & Groom pub. I told them how I used to drink there, when I worked at Crown Chemicals – a veterinary pharmaceutical company, just down the road.

They in turn said that their near neighbours, who bought the former pub, have kept the interior of one of the bars, pretty much as it was when it was still trading. It’s a shame it closed, but its days were numbered when owners, Shepherd Neame, purchased the Chequers, a much larger former coaching inn, in the centre of the village. 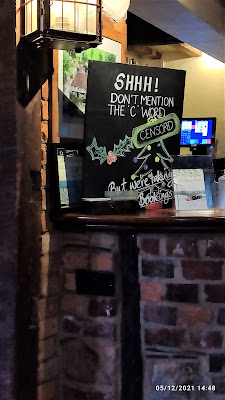 The Old tasted every bit as good as it looked. I scored it at 4.25 on Untappd, although I’m not sure what that equates to on CAMRA’s NBSS scale. Had I not been driving, I would have stayed for another, but that would have been foolish. Instead, I savoured the pint I had in front of me, whilst looking around and appreciating the timeless atmosphere of this lovely old country inn.

Near the beginning of this piece, I mentioned the difficulty of getting to Hook Green by bus, but earlier today, whilst visiting Tunbridge Wells, I noticed a bus service running to Wadhurst. The latter is a small Wealden town, situated to the south-west of Lamberhurst and so, with my bus anorak’s hat on, I carried out a spot of online research.

I am now pleased to confirm that the No. 256 bus, that operates between Tunbridge Wells and Lamberhurst, passes through Hook Green, with a stop just a few hundred yards down the road from the Elephant’s Head. It also stops at the Vineyard pub, next to Lamberhurst Vineyards. With these points in mind, I can feel a return trip to the Elephant’s Head, coming on very soon. (That will teach Mrs PBT’s for teasing me about being a “bus w*nker!”)

The sign of a true pub blogger!!! Always utilise tasks such as DIY, dropping off the kids, shopping etc. to tie in with a visit to a pub...top effort Paul!

Thanks for the compliment, Beermat. You can't beat combining a shopping expedition, or other excursions into town, with a visit to the pub. It's a sort of "reward" to one's self, if you like!

I managed the same trick again, at the beginning of the week - as referenced in my most recent post. I don't think my wife even noticed, although having said that, she does know what I'm like and in a way would be mildly disappointed if I didn't manage to score a beer.