When there's no cask, is a beer in the bottle worth two in the bush? 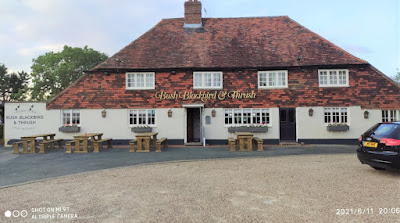 The lad and I took a drive over to East Peckham on Friday evening. Our mission was to find the location of the local vaccination centre, prior to Matthew’s first Covid jab in a couple of weeks’ time. East Peckham lies to the north-east of Tonbridge, and is a large, sprawling village with no obvious centre, apart from a small parade of shops.

It has suffered over the years from piecemeal development – mainly private residential estates, and it is on one of these developments, that the Jubilee Hall, which is where Matthew will need to attend for his vaccination, is situated. Fortunately, the hall is well signposted, but it was worth us doing a dummy run, rather than driving around frantically, trying to locate it, next Friday week. 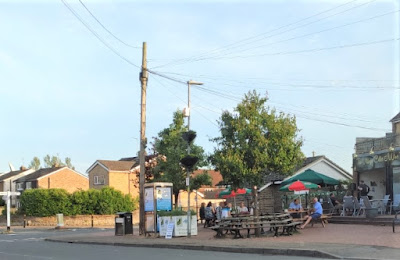 East Peckham is also a village that has been badly affected by pub closures over the years, and since I first moved to West Kent, back in the late 70’s, I have witnessed the disappearance of four of them. One has recently been sold at auction, and no longer trades as a pub. Two others have vanished completely; burnt to the ground, possibly deliberately, whilst the other one is now an Indian restaurant. 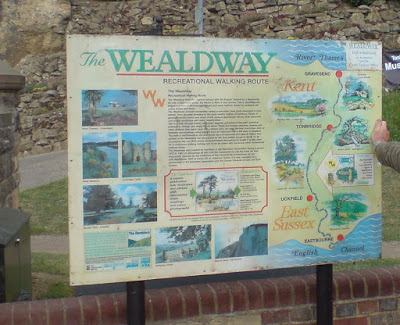 The Harp, on the road into the village from Maidstone, was one of the pubs that went up in smoke. This was a shame, as at one time, it stocked an interesting range of cask beers, including a couple from Hog’s Back Brewery, which was unusual for the area. It’s later incarnation as a rather dodgy “hostess” bar, left the Harp out of favour with villagers and the local authority; the latter revoking its license on the grounds of public decency. I wrote a post about this, back in 2013.

The Rose & Crown was situated at the opposite edge of the village, and caught fire in February 2010, a couple of months after it closed. In its heyday it was an attractive looking pub, that dated back to the 18th Century, but following the fire, and the flooding that occurred at Christmas 2013, the building was demolished and replaced by, what to me is, an ugly American-style condominium type development. 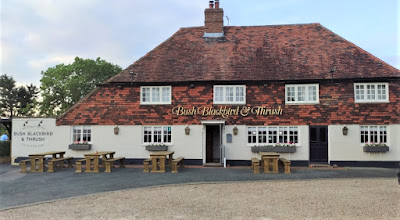 The Addlestead Tavern, sited at a prominent junction on the road in from Tonbridge, is now a curry house, whilst the Merry Boys, which is in the centre of the village, opposite the parade of shops, was sold at auction in April 2020, with plans for conversion to some other use. I have vague recollections of setting foot in the pub once, but the Merry Boys was very much a local’s pub with little in the way of appeal, for visitors.

It’s worth mentioning the Village Coffee & Wine Bar, which occupies one of the above shops, as or attention was drawn to it on our drive through the village. This was on account of the people sitting outside. I took a photo (see above), as we drove by – we were travelling in Matthew’s car, and I have included my “drive past” shot for the sake of completion.

These closures leave East Peckham, with just two pubs: the Bush plus the Man of Kent. The latter is some way from the village, closer in fact to Golden Green. It occupies an attractive location at Little Mill, next to the River Bourne – a tributary of the Medway. It is a favourite watering hole for a particular group of Mrs PBT’s girly friends and is perhaps a pub worthy of its own write up. 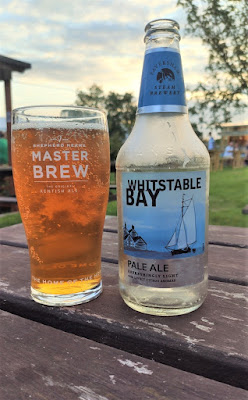 The Bush, Blackbird & Thrush is also some way from village centre and is surrounded on all sides by open fields. When I first moved to West Kent, the Bush was renowned for its Fremlin’s Bitter (and occasionally Tusker), served direct from the cask. I’m not certain exactly when Shep’s took over the pub, from Whitbread, but they have continued this tradition. It was in order to enjoy a pint of gravity served Shep’s that Matthew and I decided to call in, before driving back to Tonbridge.

The quaintly named, Bush, Blackbird & Thrush is an attractive long tile-hung building, constructed in typical Kentish style, set back from the road. There is a large garden to the rear and the left of the pub and, given the fine evening, that that is where we headed. We were told by the rather young-looking member of staff that we could sit at any free table, and he would come and take our order. So, after parking ourselves at a convenient spot, we waited for him to come and take our order. “What cask ales have you got on?” I asked. The term “cask ale” nearly always seems to confuse the “yoof” of today, so I qualified it with the reassuring words “real ale.”

It was then that I learnt that none were available. There was some story about the pub placing their usual order, and then discovering that none had turned up. It sounds unlikely, but then we are not living in normal times. Also, Shep’s might be concentrating on packaged beers, such as bottled, canned or keg at the moment, but whilst disappointing, there were, several bottled options available.

I opted for a bottle of Whitstable Bay Pale Ale, which fortunately arrived with a glass. I suppose the 500ml size doesn’t quite lend itself to being necked, straight from the bottle! It was nicely chilled and hit the spot.  I wasn’t overly concerned that no cask was available; although some of the feedback I received on the Beer Socials WhatsApp group, I am a member of, made me think I was supping with the Devil. 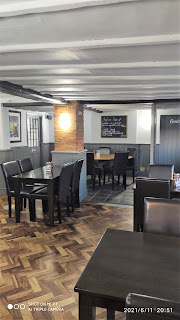 Matthew went for a pint of Spitfire Lager. I wasn’t aware that such a beer was available, but the iconic WWII fighter aircraft is an important, and easily recognised brand for Shepherd Neame, and they appear to be applying it across a wide range of products.

As we sat their enjoying our beers, I took time to take in the scene in the spacious garden in front of us. There was a variety of people doing the same as us, and at the far end, a trailer, complete with cooking facilities and serving hatch, was dishing up food of the “chips with everything” variety. I imagine this was brought in back in April, at the start of pubs re-opening, when it was outdoor service only.

The area to the side of us, seemed popular with local youngsters, most of whom were sat under a gazebo-like cover. They all seemed to know each other, so the banter, and the insults all seemed good natured. I didn’t feel too happy taking photos though, especially as Matthew freaks out when I start snapping away. This means that the majority of the garden shots were taken surreptitiously, with by phone resting at 90° on the table and with the shutter noise silenced. 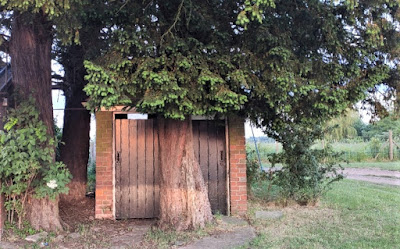 The same applied indoors. I didn’t feel the need to use the toilets but did stick my head briefly though the front bar to take a quick snap of the right-hand bar. Contrary to the trend of the last quarter of a century, of knocking down partitions between bars, the Bush appears to still have two separate rooms. There is also a block of two outside toilets, that are obviously not longer in use, given the substantial tree that is growing in front of them!

So, a quick beer plus the renewal of my acquaintance with an old favourite pub, provided a good end to what had been a busy and challenging week at work. Roll-on September!

No cask ! And you didn't urge them to repent their sins ?

Yes, I had that reaction when I had a bottle of Abbot from a Beer Guide Bowls Club just before they stocked up for 17 May. It's only beer !

Agreed Martin, it is only beer! There's a misconception that just because you're a CAMRA member, you should always drink cask ale.

I'm no longer a member of the Campaign, so there's no need to beg forgiveness from the mother church - as Ed Wray calls it. Furthermore, whilst cask is my normal tipple of choice, there are times when I fancy something different.

It's nice to not feel obliged to drink cask and it's also good to know I'm not the only individual being admonished for not drinking the "real thing."