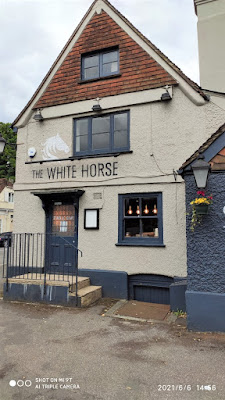 Anyone reading the comments that followed the previous post, will know that I’ve been rumbled, and that Higgs Bosun, otherwise known as Anonymous Matt, named the mystery pub I was planning to reveal in this article.

So yes, Sunday’s impromptu pub stop was indeed the White Horse, at Sundridge, and, in another scoop for this blog, this was my visit to this attractive village inn. This fact surprises me, as much as anyone, as I must have driven past the White Horse countless times, given its prominent position on the A25.

Back in the day, this single-carriageway road was the main artery for traffic travelling east-west whilst avoiding the capital. I was one of those vehicles, back in the early 1980’s, when the Tonbridge-based company I was working for seconded me, on a project, to a company in Hounslow, who were in the same group.

I was living in Maidstone at the time, so would join the A25 at Wrotham Heath, and then travel, nose to tail, westward, through several, long-suffering village, before joining the A217 at Reigate. There was actually a small section of the M25 open, between what are now Junctions 6 and 8, but how settlements like Borough Green, Seal, Westerham Brasted and Oxted managed with all that traffic (including HGV’s), is difficult to comprehend today. 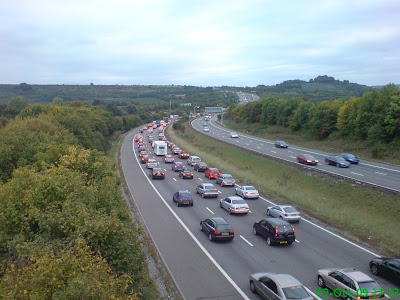 The 67-mile journey was so time consuming as well as tiring, that I took to travelling up to Hounslow on a Monday, and staying at a local hotel until Friday, just to avoid spending several hours each day, sitting in slow-moving traffic.My journey west out of Sevenoaks, took me through the small village of Sundridge and there, at the traffic lights, on opposite corners of the crossroads, were two pubs.

The Lamb closed quite a few years ago, but I’m happy to report the White Horse is very much open for business and doing alright. Matthew and I only discovered this on Sunday, and only then because there was nowhere remotely near to park the car, at the pub we’d originally decided to stop at. The place appeared to be literally bursting at the seams as well, as we drove past, which is how we ended up at Sundridge. 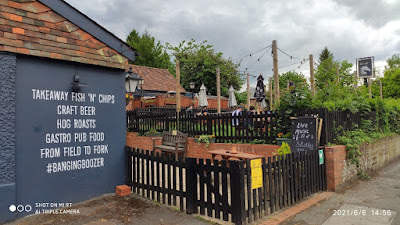 Fortunately, and much to our relief, there were spaces in the car park when we arrived, but before describing our visit, it’s worth writing a few words about our original destination. This was the Bricklayer’s Arms, one of two pubs in the village of Chipstead, overlooking the large lake, just along from the Tesco superstore, at Riverhead.

The “Bricks,” as it is known locally, is a Harvey’s tied house, and probably the brewery’s northernmost outlet – with the exception of the famous Royal Oak, in south London’s Borough district. It’s renowned for its Harvey’s Sussex Best, served direct from the cask – the other Harvey’s beers (seasonal offerings, in the main), are dispensed by hand-pump. 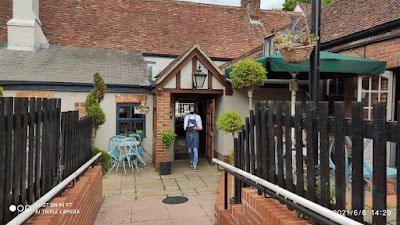 It’s 10 years since I last set foot in the pub, so a return visit was long overdue, but it was not to be. The world and his wife appeared to be there, enjoying the warm weather, and the view out, across the green and over to Chipstead Lake.The latter is a former gravel pit, that has been transformed into a local beauty spot, popular with the sailing fraternity, anglers, and people out for a walk in the country. 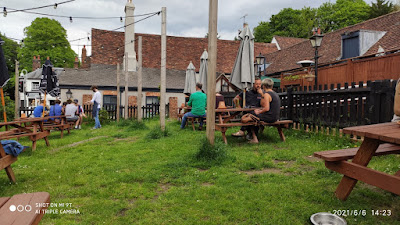 It would have been nice to have stopped and admired the view, over a pint of Harvey’s, but I will try a mid-week visit next time. Thwarted in our plan for a pint of Sussex Best, we drove on, along a country lane which took us over the M25 motorway, before turning back towards Sevenoaks. This was how we ended up in Sundridge and calling in at the White Horse. 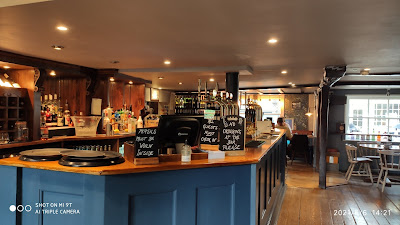 After parking the car, we approached the pub through the rear, passing the raised garden area on our left. We entered the pub, just to announce our presence, but also to have a quick scan of the hand pulls. We were asked if we wanted to sit indoors or outside, so being a fine day, we chose the latter. The friendly staff member told us to take whichever table in the garden took our fancy, and she would come and take our details, plus our drinks order. 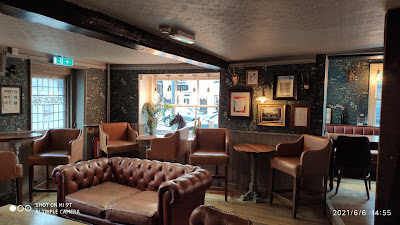 True to her word, she came over and took my name, plus contact phone number, so no App clogging up the phone memory. She confirmed that Theakston’s Best, plus Hobgoblin Gold were the cask ales, before reeling off a list of lagers for Matthew’s benefit. One of the lagers mentioned, was Krušovice, a beer rarely seen outside its native Czechia. Matthew had already settled on a pint of Amstel, but if I find myself at the White Horse again, I will give the 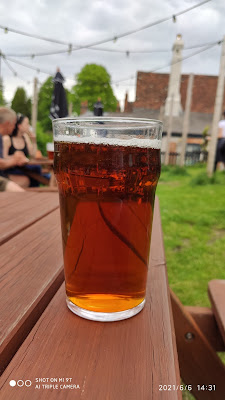 Krušovice a try. My Theakston’s Best was in fine form, but as the correspondent who spotted my entry on Untappd pointed out, the beer was probably spoiled by not being pulled through a sparkler. He was right, of course, and whilst it pains me to say it, northern beers are definitely tailored to be served in this fashion. We enjoyed our drinks but didn’t stay for another. I was driving, plus we had a boot-load of grocery shopping in the back of the car, that we needed to get home, and in the fridge. The pub was reasonably busy, but nowhere near the level we’d witnessed at the Brick’s. Most customers were out in the garden, like us, with very few inside. I manged a quick glimpse of the latter, when I nipped in to use the toilets, taking a few surreptitious photos, on my way out. So, top marks for a genuinely nice pub, offering friendly service and good beer. The food looked good as well, and I’m pleased to report the place wasn’t crowded out with foodies. Thinking back, it’s strange that I didn’t stop at the White Horse, on those journeys, all those years ago. It might have had something to do with the beer, as the pub belonged to Allied Breweries in those days, and closer to home, there were several prominent free houses, offering a more exotic range of beers. Places such as the 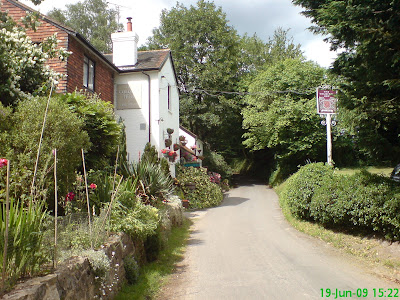 Crown Point Inn, the other side of Seal, the Padwell Arms, or the Golding Hop, both just outside Plaxtol, and both sadly closed. These were the establishments that appealed to a young real-ale aficionado, such as me, back in the early 1980’s.

Times change, as do pubs, and as just mentioned, some are no longer with us. Forty years on, things are rather different, so it was perhaps appropriate that I should have waited this length of time, before discovering the White Horse at Sundridge.

Doubt even a sparkler could have saved that sorry looking effort. Just the product of a clueless pub churning out ‘beer’ to passing tourists trying to find their way to Chartwell.
As you are probably aware, The Nelson Arms in our delightful little town don’t use sparklers - and they are serving some of the finest conditioned beers available anywhere in the UK!

Great area for walking there. I'd have been interested to get your reaction to that pint of Harvey's from the barrel, often the best way to sample it.

Agreed Matt, the Nelson is certainly turning out some fine cask-conditioned beers. As for the beer at the White Horse, it tasted much better than it looked.

There is definitely some good walking in that area Martin, lying as it does on the dip slope of the Greensand Ridge. The same friend, whose footsteps I am following along the North Downs Way, has also completed the Greensand Way, walk.

If anything, this looks a more interesting trail than the NDW, passing as it does through some remote countryside, including Leith Hill - the highest point in south-east England.

Another walk to keep me out of mischief, when I step down from my current position!