King's Lynn - on a Sunday afternoon 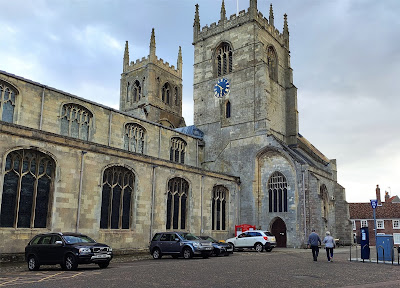 I’ve been to King’s Lynn a few times, but never really had time for a proper look around the town. The town’s direct rail connection to London provided a convenient and cheap means of travel up to Norfolk, especially when the route formed part of British Rail’s Network South-East division. Back then I had a Family Railcard, which entitled me and the family to a one third discount over the entire south-eastern rail network.

This proved handy for visits to my parents, who’d recently retired to Norfolk. I’d purchase a discounted ticket; we’d take the train to King’s Lynn and my father would collect us from the station.  Mrs PBT’s also used the route to drop off and collect  son Matthew, when he spent time away with his grandparents. 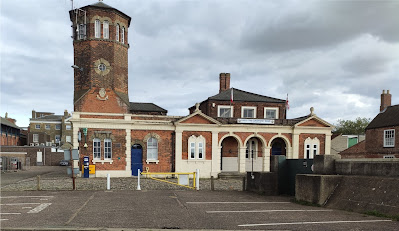 Most of the time it was straight into dad’s car and then off, for the 40 minute drive to Swanton Morley, but I do remember one occasion when mum accompanied dad, and we spent a while looking around King’s Lynn, stopping for a coffee somewhere in the town centre. Last weekend’s brief stop-over therefore, provided the perfect opportunity to capitalise on my fleeting acquaintance with the town, and get to know the place better.

Matthew and I drove up to King’s Lynn last Sunday, and after checking into the bargain-priced Premier Inn on the edge of the town shortly after 2.30 pm, set off to explore the town. A look at the map revealed a 40-minute walk – eminently doable, apart from Matthew’s aversion to exercise, so we ended up taking the car. 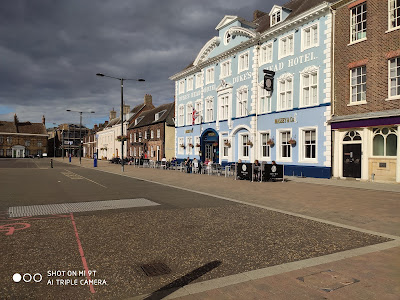 Despite it being Matthew’s vehicle, he was also reluctant to drive – the excuse being that he didn’t know the roads. “Well neither do I,” was my stern reply, “but I can follow road signs and I have a reasonable sense of direction, and that’s all that’s needed.” I must be growing soft with age, as I still gave in, and drove us into the centre of Lynn, using the method described above.

There was the occasional wrong turn, but we arrived at a suitably empty car park, behind the High Street, without incident. I made him pay for the parking though, but surely only a tight-wad council would charge motorists to park on Sundays and Bank Holidays. 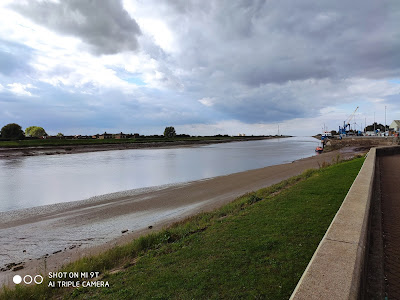 We had a stroll around, the shops having all closed by this time, admiring the attractive buildings at the north end of the High Street, especially those grouped around the quaintly named Tuesday Market Place. I made a mental note of a couple of pub possibilities for later, before heading for the waterfront and a look at the River Great Ouse.

I remembered this view from that previous visit with my parents and although the tide was out, exposing banks that are part sand and part mud, the Ouse is still an impressive site. Much of the water collected inland from the Fens, drains into the Wash; a large and wide inlet of the North Sea. King John reputedly lost some of his royal jewels there, when his baggage train became trapped by the rapidly rising tide. 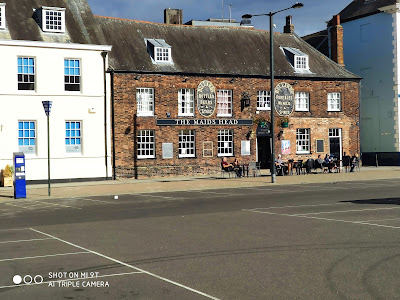 The much-maligned king had a special relationship with the town, which was then known as Bishop’s Lynn, granting in 1204, a charter allowing the merchant guilds to govern themselves. On 12th October 2016, 800 years to the day after the king lost his jewels, a life-size bronze statue of King John was unveiled in the town.

I thought I’d throw in that piece of local history, but perhaps more importantly is the fact that King’s Lynn was one of the most important ports in the country during the 12th and 13th centuries, after establishing links with the powerful Hanseatic League. This association of traders and merchants from Northern Germany and other countries bordering the Baltic Sea, was an early type of “common market” which contributed greatly to the town’s prosperity. It left a legacy of medieval buildings including two former Hanseatic League warehouses, which have now been adapted for other purposes, (one houses a pub and a restaurant). 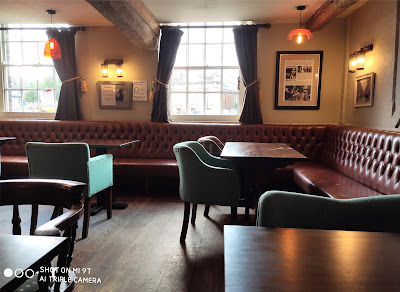 It was now time for a drink, and where better, aesthetically at least, than the attractive, brick-built Maid’s Head Hotel, overlooking the Tuesday Market Place. Separated by an alleyway from its larger, and more grandiose neighbour the Duke’s Head, the Maid’s had a cosy and welcoming look about it. I’m not sure about the authenticity of the two large oval advertising signs, proclaiming the virtues of Bullard’s Ales, between some of the upstairs windows, but the Maid’s Head is certainly a quirky old building, that is full of character.

I’d wanted to sit outside, but all the table at the front of the pub were taken. Instead, we approached the front door where one of the barmaids was enjoying an afternoon ciggie. She showed us inside and allowed us to approach the bar. There were two hand pulls, one of which was for Ringwood Brewery Boondoggle. I opted for that, especially after the barmaid answered my question about it selling well. 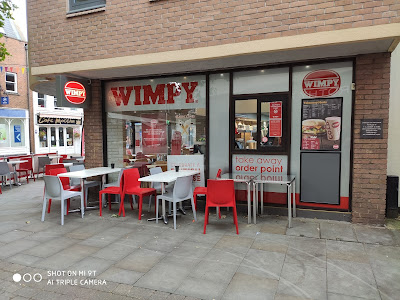 Matthew had an international lager of some description (probably Kronenbourg), and we walked across the spacious and virtually empty bar area, towards the table that was furthest most from the bar. There was a reason for this, as there were two customers sitting close to the door arguing, admittedly in friendly sort of way, but with raised voices and rather too much swearing for my liking.

I don’t what it is about those who have taken too much drink, but it seems to do something to their voices. The more they have to drink, the louder they become, but fortunately my choice of seating, in an alcove away from the bar, did muffle their drunken ramblings, somewhat. So, the lad and I still managed to have a good chat and made some progress in trying to map out a way for him to get a rung on the housing ladder. 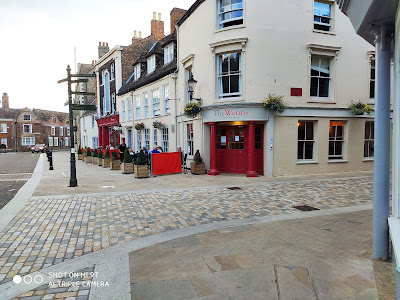 The Boondoggle was in fine form too, pale in colour, smooth, well hopped and topped with a fluffy white head, but as I was driving, I just stuck with the one pint. Rather annoyingly, as we left the pub, we noticed that two of the outside table were now free, meaning we missed out on 30 minutes or so of looking at people and generally watching the world going by. Never mind, but it’s good to take advantage of the fine weather whilst it lasts.

After leaving the Maid’s Head, there was time for a walk to the other end of the High Street, in order to view this well-preserved medieval part of the town. There were some rather attractive looking buildings, including King’s Lynn Minster (St Margaret’s). We also noted a place called The Wenns, which is described as a “Chop & Alehouse.” This was an establishment I had briefly considered for a Sunday evening meal, until I discovered it specialised in “sharing platters” – something we don’t really do in the Bailey household! 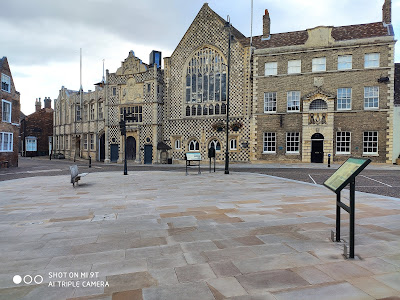 There were quite a few people milling about, but it’s hard to say how many were locals and how many were visitors. The warm weather may well have persuaded people out from their homes, but for towns such as King’s Lynn, that rely on tourists, things still aren’t looking particularly good.

After seeing the sights, we drove back to the Premier Inn, where we were staying for the night. Knowing the difficulty of finding a pub serving food on a Sunday night, I’d taken the precaution of booking a table at the adjacent Freebridge Farm, Brewer’s Fayre. 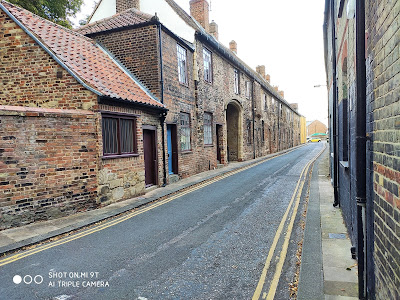 It wasn’t offering the full menu, because of the Corona situation, but we both had some sort of chicken burger with “skins-on” chips. There was no cask available, and no decent lager either, so I made do with a couple of bottles of Brew Dog Punk IPA. They were good, but expensive, but sometimes it’s worth paying that little bit extra.
Posted by Paul Bailey at 21:30

I'll bookmark this post for reference should I decide to return to King's Lynn next year.

We walked past the Lattice House Mudge, and I took a couple of photos. There was certainly an air of authenticity about the place, but with no cask ale and time tight as well, we didn't step inside.

I remember the pub being owned by CAMRA Investments, but as I recall there was quite a bit of controversy about their association with the building. I'm fairly certain there was some financial issue associated with the pub, but I'm not sure if this was down to the initial purchase price, the high costs of restoring a Grade One listed building, or a combination of the two.

King's Lynn itself though, is definitely worth a visit.

It prompted me to visit that summer and enjoy the unique hospitality of the Crown & Mitre !

Never really thought of Lynn as a tourist stop; most Londoners are heading straight for Burnham and the coast and Fen folk for Heacham and Hunny !

Thanks for the link to Duncan's excellent piece, Martin. I remember your own post now about the Crown & Mitre, and its staunchly pro-European landlord!

The pub was closed when we walked by, and a notice in the window said this was due to Roger the landlord, recovering from illness. We also walked past the Nip & Growler, which looked very tempting, but definitely the place for a lengthy session, rather than just a quick drink!

Lynn probably isn't a tourist stop for the type people you mention, but for those of us travelling from further afield, (Mudge and I by the look of things), it is definitely worthy of a second look and slightly longer stay.