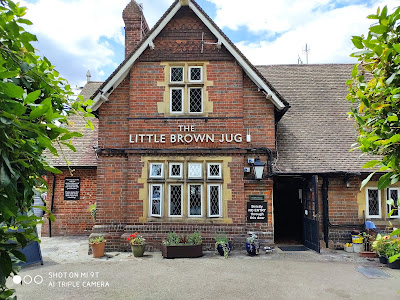 Oaky, not the opening line of a 1960’s anti-Vietnam war chant, but a brief report on a quick pint, enjoyed in the garden of the nearest pub to my place of work. The Little Brown Jug (LBJ), is less than 10 minutes’ walk from our factory. The pub re-opened for business shortly after the Corona-virus restrictions were relaxed on 4th July.

I walk past the LBJ most days, on my lunchtime walk, and had watched the preparations the staff were making, in advance of re-opening, with interest. Sometimes one or two of them would wave, or even shout hello, whilst working on the extensive garden at the side of the pub, including a rather attractive young lady wearing the skimpiest of bikinis. This happened on more than one occasion! 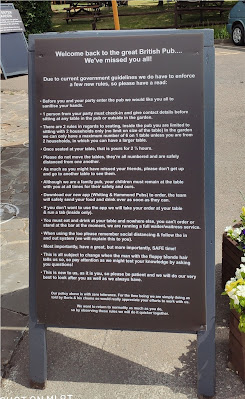 If you’ve got it, why not flaunt it, I suppose; I certainly wasn’t complaining, even though I will probably fall foul of the PC brigade for saying so.  I mentioned what I’d seen to one of the girls at work, who happens to live in the village. I’m treading on very dangerous ground here, but women can sometimes be quite catty about other women, so my colleague's remark that “she’s always exposing her flesh” didn’t come as a huge surprise.

What did, was the knowledge that this attractive and very pretty girl used to be in the Channel Four soap opera Hollyoaks. Now that means virtually nothing to me as, hand on heart, I can honestly say I’ve never seen even a glimpse of Hollyoaks, but I did wonder what had brought this former actress to be working a pub, in a small Kentish village.

That’s quite enough of soaps and scantily clad young ladies, even though I know no-one is going to believe that she wasn’t my reason for calling in at the LBJ this lunchtime. For the record, I didn’t set eyes on her, so perhaps it was her day off, but getting back on subject the pub appears to be doing well and I enjoyed an excellent pint of beer.

Having walked past the pub on several occasions since it re-opened, I sort of knew the score. Queue up outside to the left, if you’ve made a prior booking, or is you’re a casual visitor, like me, queue up to the right. I did as instructed, making sure that the barman had noticed me.  I was then approached by one of the waiting staff and asked to fill in my contact details. 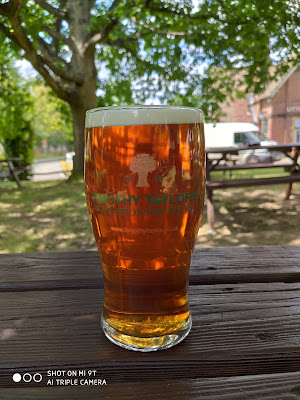 My offer of a business card was declined – silly really as it contains all my details. The pub would soon know that I work just down the road for the largest employer in Chiddingstone Causeway, but perhaps it was me just being lazy. Details duly handed over, the waitress led me inside the pub, explained the one-way system and then, as I’d indicated I wanted to sit outside, showed me to a table in the garden.

On our way through the bar, I clocked the presence of Timothy Taylor’s Landlord, alongside local stalwart, Larkin’s Traditional. Once seated I ordered a pint of Landlord, which another waitress brought out to me on a tray, along with a hand-held card-machine. Being outside the latter had difficulty connecting to the Wi-Fi, but eventually it accepted my payment of £4.90 – ouch!

The LBJ has a reputation for being pricey, so perhaps I should have expected a five-pound pint, but I have to say the Landlord was in tip-top condition, and definitely worthy of a 3.5 NBSS. The only thing I will say is that possibly the beer is not quite the benchmark pint is used to me, but nevertheless full marks to the pub for looking after it so well. 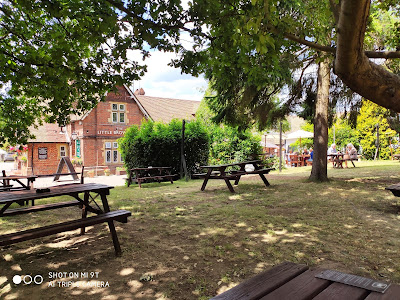 It wasn’t quite the “quick pint” I referred to at the beginning of this piece; instead I savoured it whilst enjoying sitting out in the garden, under the shade of an overhanging tree.  There were plenty of diners and “ladies that lunch” sitting outside as well and with car park that was almost full, I concluded the pub must be doing something right.

It deserves to be a success; especially given the work the staff have put into getting the place compliant with the new guidelines.  I include our bikini-clad actress amongst the others, of course. Perhaps she might be there waiting to serve me, next time I call in!

£4.90 isn't untypical for Landlord. Just as well it was good.

Glad you're catching up. Much like I must do with your blog, Paul.

I feel like I am now au fair with Hollyoaks! Can you do a Brookside special next time please? 😄
Nice looking pint and great to see pubs open and serving tip top cask again.

I like to live dangerously on occasion Martin, but without generalising the fairer sex CAN sometimes be less than complimentary about other women; especially if they view them as a threat.

This is an observation, rather than a judgement and I'm not saying men aren't prone to similar behaviour, either. It was much more the way in which my colleague came out with her remark/put-down, that prompted my comment, rather than anything else.

As for post-lock down beer prices, I haven't yet had a pint that's below £4.00. I know some will complain, but I don't begrudge paying that bit extra - it's just good to have pubs open once more!

BBM, I'm afraid I know very little about soaps, and couldn't tell you if Brookside is still running, or has been shuffled off onto UK Gold. There is however, a family connection to Coronation Street.

My mother's cousin was an actress called Jessie Evans, who played the part of Granny Hopkins in the long-running soap. This character was a rather formidable Welsh matriarch who ran the Corner Shop in Weatherfield, for a short period during the mid 1970's.

Oh, I can't be doing with all this namby-pamby, walking-on-eggshells talk, Paul.

Let's just call stuff what it is eh?

Agreed Etu, but unfortunately there's a lot of mass cretinism about. Poland came within a whisker of freeing itslef from the grasp of this insidious scourge, I wonder what will happen across the Atlantic, this November?

Meanwhile our own fair isle continues along the disastrous path laid out by puppet-master Cumming's, under the cloak of the worst pandemic in over a century.