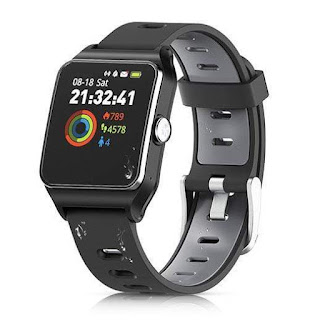 I’m sure I mentioned in an earlier post that I acquired a Sports Watch for Christmas, which synchronises to my new phone. Now I know that the word “sports” and me don’t exactly go together, but the plan is that it will help with increasing my fitness levels  over the coming months. The watch has proved particularly useful for tracking my lunchtime walks, and also as a means of counting the number of steps I undertake each day.

As with the majority of fitness devices the software, which links it to my phone, recommends walking 10,000 steps a day. Over the last few years, this amount of steps has become embedded in people’s minds as a means of not only increasing general fitness levels, but also as a way to prevent weight gain, or even lead to weight loss.

The latter two objectives have proved to be incorrect, but a daily goal of 10,000-steps does offer other significant benefits, not least of which is getting people out of a sedentary lifestyle. In addition, 10,000 steps for most people, adds up to about five miles each day, which goes a long way to meet recommendations of at least 150 minutes of moderate exercise per week. 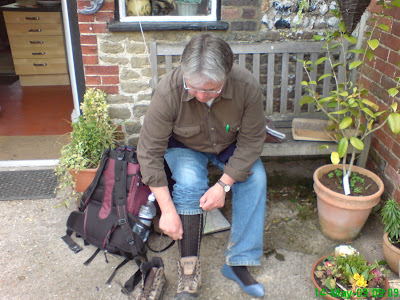 Now comes the hard bit; 10,000 steps isn’t that easy to achieve - certainly not in the course of a normal working day! I am quite lucky as I can get up, leave my desk and quite legitimately go for a wander. My desk is located on the first floor of an open-plan office, but the QC laboratory that I am responsible for, and which I quite often do a spot of testing in myself, is on the ground floor, so there is a walk, and some stairs, between the two work places.

In addition, I often have to go into the factory to conduct inspections, take samples or just deliver some paperwork, so with the site consisting of three inter-linked units, there can be a reasonable amount of walking over the course of a normal day. Even so, I estimate only clocking up around 2,500 steps whilst going about my daily business, although fortunately I am able to escape at lunchtime and get out into the fresh air. 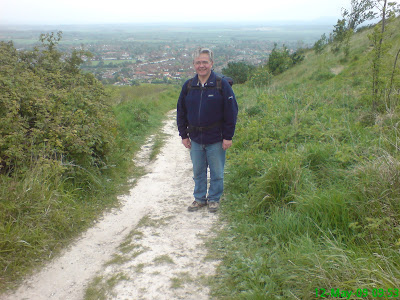 I am extremely lucky to work in a rural location, so there are some nice walks to be undertaken, especially now we’re heading out of winter and the first signs of spring are starting to appear. My usual circuit, which takes me across the old Penshurst airfield, is around a mile and a quarter, and takes me roughly 35 minutes (I am not the fastest of walkers).

For those still counting, this equates to around 2,250 steps so, as you can see, it still doesn’t approach the magic 10,000 figure, even when added to those clocked up whilst at work. Now I don’t want to come across as too much of an obsessive here, as for me this is just a bit of fun, but what I am attempting to convey is the difficulty of hitting that total, even when you’ve a job like mine which doesn’t tie you to a desk all day. 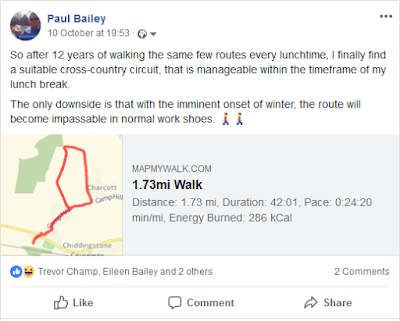 If you are still determined to achieve those 10,000 steps, it may be necessary to make a few lifestyle changes. On Monday and Tuesday last week, I took the train into work. A combination of flooded roads, and grid-locked local streets, meant it was far easier to let the train take the strain, and guess what, I hit that 10K total with ease.

A twenty minute walk to and from the station in Tonbridge, plus one of seven minutes each way at Chiddingstone Causeway, proved more than sufficient to take me over the 10K barrier, but apart from on the odd occasion,  I am not prepared to swap my car for the train.

As my journey to work, takes place during peak times, cheap day returns are not available. In addition, my Senior Railcard cannot be used until after 9.30am. So, at £4.30 each way, the train is far more expensive than my car. That £43 a week would buy me sufficient diesel for three week’s worth of car journeys, and that’s including using it at weekends and evenings. 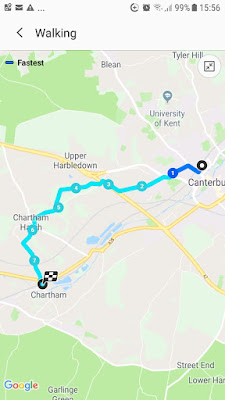 The other downside is, at present, trains only run at hourly intervals on the Tonbridge – Redhill line; although that frequency may increase once the collapsed embankment at Godstone is reinstated. I therefore won’t be ditching my car, anytime soon; and certainly not in order just to clock up a few more steps walking!

Before finishing, it’s time to dispel the myth behind the 10,000 steps a day recommendation, by revealing that it started off as a a marketing gimmick for a Japanese pedometer maker. In 1965, the company concerned released an early type of pedometer, which it called the "10,000 steps meter." Over the years, the theory that walking 10,000 steps a day became popularised as the key to health and weight loss.

Surprisingly, there were never any scientific studies caried out to  back up that theory; not until recently (see above). What’s more, when people asked why that 10K number became standard, the answer was, "It's an easy number to remember!"

Regardless of this, it’s still worth remembering that the benefits of a 30-minute daily stroll are many and varied, from slowing mental decline and lowering blood pressure, to improving sleep and relieving depression. You will definitely meet health guidelines by walking 10,000 steps a day – and it's not bad advice for younger people or those who have more experience with a fitness regimen, but for older people and those who are less fit, the so-called magic number can be demoralizing.

So if you fall into the latter categories, try setting a reasonable goal, such as walking 2,000 more steps than you usually walk every day; especially if you're inactive and your goal is to become more active.
Posted by Paul Bailey at 14:55

I had a fitbit for a few years before and after retirement and became obsessed about doing 20,000 a day, or about 10 miles. It's far harder in the dark, wet winter than it is in Spring!

20,000 is a lot of steps, Martin. I seem to remember that back in the early days, there was a line on your blog that mentioned something about walking 10 miles a day.

I thought at the time that was a helluva lot of walking to be doing on a daily basis. I can keep that level up for a few days, especially when I'm walking a long distance footpath, but attempting to fit that in on a daily basis wouldn't be compatible with my lifestyle/job etc.

Some people go to the gym or run, of course, and walking will never match those activities for fitness, though a good 3 hour walk at a fair whack does make you feel better.

"A good 3 hour walk at a fair whack does make you feel better."

And thirsty, of course!

More than 160000 men and women are trying a easy and SECRET "liquids hack" to drop 2 lbs each night while they sleep.

It is proven and works all the time.

Here's how you can do it yourself:

2) And then do this proven HACK

and you'll become 2 lbs lighter in the morning!

Are you ready to make money automatically??

You can test-drive the system for yourself risk free...

As claimed by Stanford Medical, It's really the ONLY reason this country's women get to live 10 years more and weigh an average of 19 KG less than we do.

(And actually, it is not related to genetics or some hard exercise and really, EVERYTHING about "HOW" they are eating.)